The Autel Evo is a brilliantly designed drone that comes with some stunning features the best of which is its 4k camera stabilised by an advanced gimbal system. It’s a foldable drone that weighs less than a kilo and is easy to carry around. If you are a frequent traveller, this is a good drone to have with you on your travels. It can record 4k video footage at 60 frames per second and take 12mp still images. The drone comes with intelligent flight modes, a 3-way obstacle avoidance system and has a flight time of 30 minutes. It’s one of the best 4k drones on the market and a good alternative to the Mavic Pro.

Drones have grown in popularity over the past few years and one of the main reasons for this is because of the cameras many of these drones come with.

Drones with 4k cameras (like the Autel Evo) lets you view the world in extraordinary detail and experience places you may not have otherwise been able to see.

The Autel Evo was released as a direct competitor to the DJI Mavic Pro and although it has never reached the heights of the Mavic in terms of popularity, it comes with many of the same features and is a very good alternative to the Mavic Pro.

If you are in the hunt for an excellent 4k drone not named DJI, carry on reading this review of the Autel Evo and see why this drone may be what you are looking for.

One thing I want to note before I carry on with this review is that the Evo is an exceptional drone and it is suitable for professional use. If you are going to be using it for commercial reasons, you will need to register it and get a drone license. Please do check the rules and regulations wherever you live before purchasing any kind of professional-level drones.

Autel robotics have released a few drones but most of them have been discontinued apart from the Evo.

The Autel Evo is a well-designed drone and although it is built from plastic, it does not feel cheap, it has a solid build as you would expect from a thousand-dollar drone. 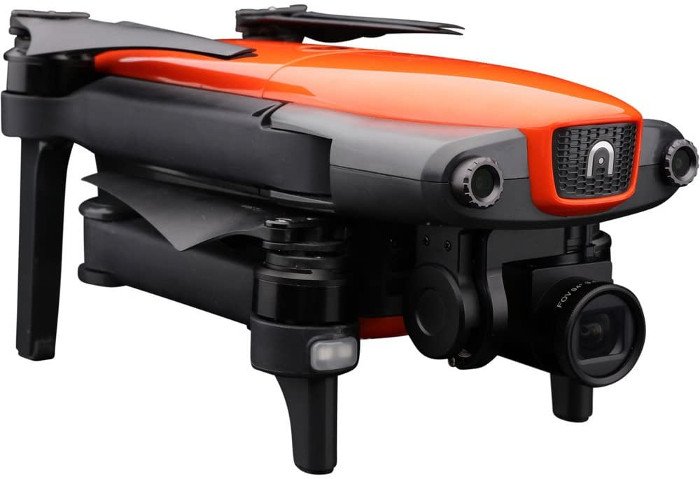 Like the Mavic Pro, the Autel Evo has a foldable design, foldable drones are probably the most popular types of drones on the market now. They are usually lighter than most other drones and their foldable structure makes them compact and easy to carry around.

This is why drones like the Autel Evo are perfect for travel photographers, it won’t take up too much space and is very light for a drone of its calibre. It weighs just under 900g, so even if you have no plans to use it for commercial reasons, you will still need to register the drone if you live in the UK, Canada or the USA, most other countries do not require registration if you are just going to be flying for recreational purposes, however, I still advise you to check what the rules are wherever you live.

The Evo isn’t too big when it is unfolded measuring 33.8cm diagonally and is fitted with collapsible propellers. The propellers are easy to fit and you get a pair of extra propellers with the drone package.

The drone is fitted with powerful brushless motors that will allow the drone to fly faster, brushless motors are also much quieter and more efficient than brushed motors and they also last longer.

Like most modern drones, the Evo has LED lights on the end of each rotor, these provide a couple of purposes. They will allow you to fly during twilight hours and they help to indicate when the drone compass is fully calibrated.

One the end of each rotor arm are small landing legs, these are here to help you land safely and to protect the camera and gimbal.

The camera is stabilised by an advanced gimbal system that will give you distortion-free images and videos.

On the right side of the drone, there is a micro SD card slot where you can insert a class 10 memory card of up to 128gb. You do get a 32gb memory card with the drone, however, if you are going to be making heavy use of this drone, it is best to purchase a memory card with a larger storage capacity.

There are a couple of sensors on the front and back of the drone and two optical flow sensors on the bottom. These are some of the advanced technology that helps the drone avoid obstacles and allows for the drones’ autonomous flight modes.

The drone supports both GPS and GLONASS satellite systems this provides for better hovering capability and more accurate positioning on the flight map.

The drone is powered by an advanced 11.4v 4300 mAh LiPo battery, this is one of those modern modular batteries that manages to keep its charge for longer periods of time when not in use. It also has safety features that prevents it from short-circuiting and overloading, this gives it a longer shelf life.

However, despite having a longer flight time than usual, I would still advise people to purchase at least one more battery to extend the flight time without having to wait for the battery to recharge which takes a few hours.

One of the best features of this drone is its remote controller which I think is one of the best-looking drone controllers I have come across. It’s aesthetically pleasing, feels comfortable in your hands especially if you use the two handles that pull out from the bottom. 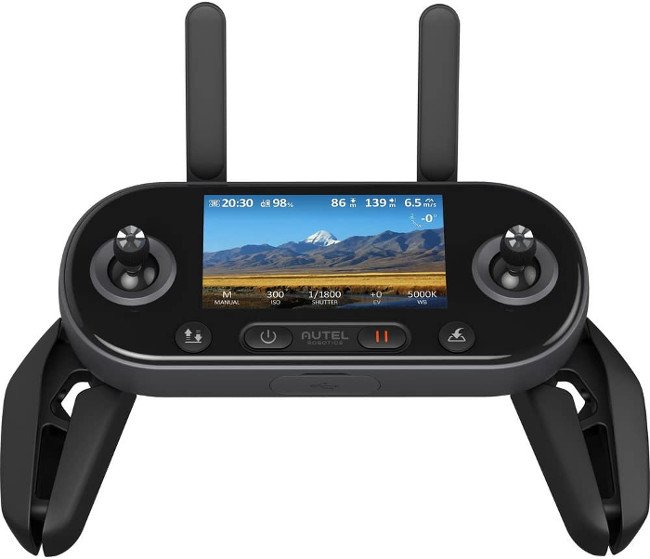 There are two antennas on the top (real antennas) and a smartphone holder that folds out from the middle and can hold a large smartphone but not a tablet. The control sticks are nice and easy to manoeuvre, and the small number of controls are easily identifiable on what they do.

One of the best features of this controller is it’s the 3.3-inch OLED screen, this screen will display vital drone data like GPS strength, battery level, flight time, height, distance and speed. However, the more impressive feature is that through the OLED screen you will be able to live stream video footage in 720p quality. So, you will not need your smartphone for this purpose, which I believe is a good thing.

This is a feature that I wish was available on more high-end drone controllers, as it will save you from having to use your smartphone for FPV purposes which can be a drain on the battery.

The remote has a button for automatic take-off/landing and one for the emergency return home function. There are a couple of dials on the top, one is to control the angle of the gimbal and the other is to navigate the on-screen menu.

If you want to make full use of the advanced features of the Autel Evo, you will need to download the Autel Explorer app.

This is definitely one of the best drone apps and on the most part is simple to use. It works on both Android and iOS smartphones and is one of the best-rated drone apps on either of those marketplaces. Through this app you will get access to the drone autonomous flight modes, record video footage in 4k, take amazing still images and even get weather reports that will indicate to you whether or not it’s suitable to fly. 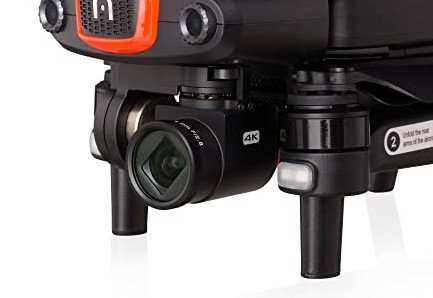 Without any doubt, the main feature of this drone is its 4k camera.

This is a professional-level camera that will allow you to record truly amazing video footage in FHD 4k at a brilliant 60fps (The Mavic Pro can only do 30fps). It has a wide-angle lens and the gimbal can be adjusted for better viewing angles.

The camera is stabilised by an advanced 3-axis motorised gimbal for superior quality images and videos. The gimbal system is one of the main reasons the videos and images will be free from shakiness and jello effect.

The camera has a UV filter that can be taken off and replaced with neutral density filters, although you do not get any ND filters with the drone package, Autel has a range of ND filters for the Evo that you can purchase separately.

It has a 12mp 1/2.3 inch sensor with which you will be able to take amazing still photography and it has HDR support that will give you more options to shoot the perfect photo.

This is an amazing camera and is suitable for professional photographers who are looking to expand their services into other areas.

Like most other sophisticated drones that come with advanced technological features, the Evo can be flown via several autonomous flight modes.

Autonomous flight modes (also called smart and intelligent flight modes) are fun and easy to operate and a great way to take videos and images without having to worry about controlling the drone.

Viewpoint – In this mode, you can control the flight path of the drone by tapping anywhere on the screen.

Orbit – With the orbit mode, you can lock the drone camera to any object you want, and it will orbit that point of interest automatically.

Waypoint – This is one of the best smart flight modes, with waypoint you can draw a flight path on the app and the drone will automatically fly along the route and come back home.

In all these flight modes, the obstacle avoidance system will be turned on for added safety but it can be turned off if you are confident enough in your flying skills, although I wouldn’t really advise this.

As would expect from a high-end drone such as the Evo, it is easy to fly, even for a beginner, this drone will not be hard to control. Everything works as it should, from its hovering capability to the autonomous flight modes, the drone has a great overall flying performance. If you feel really brave, you can fly it in the sports mode where it can reach a speed of around 42 mph and if you are feeling extra confident, you can turn off the obstacle avoidance system as well!

The Autel Evo is a fantastic drone with some great features and a stunning 4k camera. It’s not a cheap drone but if then again, it is not built for general-purpose flying, this a professional camera drone and is a great alternative to the DJI Mavic Pro. In my opinion, it is one of the best drones with a camera and worth its price, click on the button below to find out more and to check its current availability.