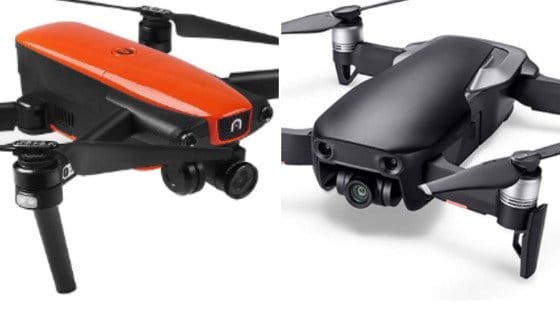 Welcome to this comparison between the Autel Evo vs Mavic Air drones.

Both the Autel Evo and Mavic Air have been on the drone market a couple of years, they are professional photography drones that come with very similar features, but which one is the better drone? That is what we will find out in this article.

The Autel Evo was released as a direct competitor to the ever-popular Mavic Pro, the drone that made the compact foldable design very appealing.

Although the Autel Evo never reached the popularity of the Mavic Pro, it has been praised by drone photographers for providing the first legitimate alternative to the DJI Mavic Pro.

The Mavic Air is not a direct successor to the original Mavic, but it does come with the same design elements and has many of DJI’s signature features.

The first thing I like to compare is the camera and both the Autel Evo and Mavic Air come with similar cameras that are suitable for professional use.

The Autel Evo comes with a 1/2.3” CMOS sensor that can capture still images in 12MP in both JPEG and RAW format. The camera has an H2 Ambarella chipset that allows it to capture images with HDR support and it is stabilised by an advanced 3-axis gimbal that will eliminate any kind of distortion resulting in crystal clear videos and images.

Videos are recorded in true 4k/2k at 60fps and 1080p at 120fps at a speed of 100Mpbs for exceptional quality videos. The drone can stream live video footage in 720p from a distance of 7km.

The Mavic Air comes with a slightly inferior camera, it has a smaller lens and the FOV isn’t as wide, however, it captures images in 12MP and records video footage in 4k at 30fps or 2.7k at 60fps with a recording speed of 100Mbps.

The camera is stabilised by a 3-axis gimbal and with it, you can take some amazing panorama photography. One of its best features of this camera is capturing 25 photos in a matter of seconds, stitching them together and creating an amazing 32MP spherical photo from it. It has a cool smart flight mode called quickshots which will allow you to capture cinematic quality short videos completely hands-free.

Both cameras are amazing and will allow you to create and capture stunning videos and still images, however, the Autel Evo does have a slight technical edge with a larger lens and its integrated image chipset from Ambarella.

Although I like the design of both drones, they both have a compact foldable design which makes them great for travelling with and especially good if you are a travel photographer.

However, I do like the overall build and design of the Mavic Air, it’s very sleek and has a nice aerodynamic structure. It comes in several colours, although I like the black one the best, it looks more futuristic and has a stealthy vide to it.

It’s lighter than the Autel Evo, weighing just under 500g, however, as both drones weigh more than 250g, you will need to register them with the FAA and if you are going to use them for professional purposes, you will also need a drone license.

The Autel is a larger drone and its also a bit bulkier, this does allow it to hold up in windy conditions much better. Both drones come with powerful brushless motors that allow them to hover more accurately and fly faster.

Both drones also come with dual GPS modules for precise tracking data and autonomous flight modes. There are also optical flow sensors on both drones that will allow it to be flown in areas where the GPS signal is weak.

The Autel Evo is powered by 11.4v 4300 mAh lithium polymer battery, this is an intelligent battery that provides the drone with a flight time of around 30 minutes. It also comes with safety features that prevent it from overheating and short-circuiting and self-discharges if it is not used for a long period of time.

The Mavic Air is also powered by an intelligent lithium polymer battery that gives it a flight time of around 21 minutes, so in this case, the Evo clearly comes out on top.

The remote controllers for both have a nice minimalist design, although I personally prefer the Autel Evo controller because of its 3.3 inch OLED screen. You can view the live video feed on this screen and so you don’t have to attach a smartphone to the controller (although you can if you want to). It also has a superior range of 7km.

The Mavic Air controller follows in the design elements of the other Mavic controllers, its small, lightweight and has a pair of handles that fold out from the bottom that can hold a large smartphone. It’s very comfortable to hold thanks to its ergonomic design and it has a transmission range of around 4km.

The Mavic Air uses the popular DJI Go 4 app, this is a feature-rich app that may take a while to work out all of its features, but the basics are easy to get a handle one. It has nice UI, is easy to navigate and comes with some useful tutorials, you also get access to the drones intelligent flight modes and the app comes with a simple video editor that will allow you to enhance your drone videos.

The Autel Explorer app is less sophisticated but still comes with lots of features that will make your flying experience more enjoyable. Like the DJI Go 4, the Explorer app has a nice UI and is easy to navigate, it’s updated frequently and extra features are sometimes added to expand the app’s capabilities.

Flight performance for both drones is very good, they are relatively easy to operate and fly smoothly even in windy conditions. Hovering capability is excellent thanks to the GPS system and computer vision sensors on each of these drones and both have multiple speed modes that will allow you to test your drone pilot skills.

The drones come with advanced pilot systems that will allow you to fly them hands-free and they both come with obstacle avoidance systems for safer flying.

The Autel Evo has sensors on the front for obstacle avoidance while the Mavic Air comes with front and back sensors that will allow it to avoid obstacles when going forward and backwards.

The Evo and the Mavic Air come with similar intelligent flight modes, these include the following:

Both drones also come with gesture control mode that allows you to take videos/photos just by hand gesture.

They also come with automatic return home feature that is activated when the drone battery gets low on charge or if you lose connection with the drone.

Both drones are also compatible with VR headsets that will give you a more immersive flying experience and can stream live video footage is in 720p at 30fps.

Both these drones are amazing, they are excellent drones for professional use and will allow you to record and capture stunning photos and videos. Although the Autel Evo is superior overall, I personally prefer the Mavic Air because of its smaller and lightweight design. If you would like more options for high-quality camera drones, click here for my article on the best drones with a camera.

Best Drones With A Camera
5
Shares