5 Benefits Of Drones In Agriculture 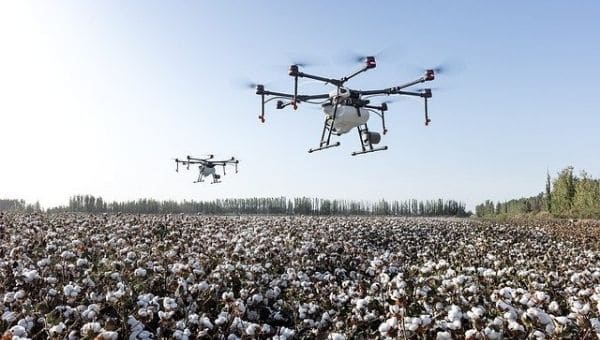 Drones are a powerful tool for farmers and agronomists to assess the health of their crops. With the use of drones, they can get an overview of their fields and collect data much faster and more efficiently than traditional methods. Drones will allow farmers to see how healthy their plants are, where they might need water or nutrients, and if there is any pest activity before it gets out of control.

Drones help farmers save money by enabling them to quickly identify problems that may have been missed without the use of a drone. The wrong approach could lead to hundreds or even thousands of dollars worth of lost crops due to issues that were not caught early enough on the ground.

Uses Of Drones In Agriculture

Drones use in agriculture forms part of an emerging trend to use advanced technologies in farming operations that allow farmers to optimise their workflow and use resources more efficiently.

Drones have a wide range of uses in agriculture, however, their main uses are in acquiring highly detailed data through the use of different sensors. This data can then be turned into different types of maps and 3D models of the area, these maps can then be used to analyse crop health, detect disease and stress in plants and identify irrigation problems.

Another emerging use of drones is in spraying chemicals to fight disease and pests as well as spreading mulch and planting seeds.

5 Benefits of Using Drones In Agriculture

Through a method called drone photogrammetry, drones can help farmers and agronomists create highly accurate maps and 3D models of the area. With drone mapping software such as Pix4DFields or Drone Deploy, images captured by drones can be stitched together to get a topographical map of the farmland. Drones can be fitted with different types of cameras like RGB, multispectral and thermal cameras that will allow farmers to gain access to different forms of data.

Data from these maps will help farmers make necessary adjustments to ensure that the land stays healthy and productive. As drones are easy to deploy, farmers can obtain field data as often as they want which will help them identify problems as soon as they occur and allow them to put together a plan of action and reduce any negative effect these issues may pose.

One of the main benefits of using smart technology in agriculture is the reduced time it takes to complete many tasks. Drones are much more time-efficient than manned aircraft for things like mapping, surveillance, and crop spraying. Drones are also used to plant seeds, spray crops with water, fertilisers, pesticides and herbicides. As many of these operations can be carried out through intelligent flight modes, they are semi-automated which results in less time being spent on the field which saves farmers money on labour equipment.

Drones allow farmers to obtain crop data fast and frequently, this keeps them on top of things like irrigation issues, plant disease and soil condition. All these things need to be at optimal conditions for crops to thrive and farmers can meet crop yield expectations. Through precision agriculture, farmers and agronomists can improve overall crop yield by data-driven variable rate prescription. By using remote sensing technology, farmers will easily be able to identify areas of the field that are not producing healthy crops, find out what the problem is and only target that area for any treatment that may be required. This will improve the overall quality of the crops, improve yield and save money in the long term.

Pests and plant disease are always going to be an issue for farmers, spraying chemicals manually will always pose a health hazard and is very time-consuming and labour-intensive. Using drones to treat infected plants is much safer and more efficient than manual labour and using land-based machinery. Smart drones also come with autonomous flight modes, this will allow farmers to plan flight paths only around areas that need to be treated and leave the healthy parts of field free from unnecessary chemicals. Not only is this a safer way to treat crops but farmers will also save money by not wasting treatment on plants that don’t need it.

By reducing the use of chemicals through data-driven targeted treatment and reducing the need fossil fuel as drones are powered by intelligent batteries, drones can help reduce pollution, help the environment and help in the fight against climate change.

Types Of Drones Used In Agriculture

The following are drones suitable to use for mapping and generating 3D surface areas for agricultural use.

The DJI Phantom 4 Multispectral drone is a powerful tool for farmers and agronomists. The multispectral sensor allows you to gather information about the health of crops, measure nutrient levels, detect soil moisture, and more.

This camera is said to provide a much clearer picture of crops, Farmers will now be able to use this technology for tasks such as assessing plant stress or spotting insect infestations early on so they can make adjustments in the growing process accordingly.

The DJI Phantom 4 RTK is a drone that uses Real-Time Kinematic (RTK) technology. This form of positioning allows it to be used for precision agriculture and mapping applications. The drone can fly up to 30 minutes, has an operating range of up to 7 kilometers, and captures images at 20MP. It’s a great drone for mapping and 3D modelling of farmland and can provide centimeter level accuracy which will help in plant counting, measuring crop height and density and inspecting crop health.

The Matrice 300 RTK is suitable for many industries thanks to its multiple payload capacity and RTK system which allows users to capture highly-detailed images for accurate maps and 3D models. It has advanced AI capabilities 6-directional obstacle sensing and avoidance, advanced health management system, an industry leading flight time of 55 minutes and a robust design that allows it to be flown in harsh weather conditions. AS the drone has an exceptionally long flight time, its suitable for mapping large farms and with its multiple payload capabilities including ones from third party manufacturers, users will be able to capture images for orthomosaic, thermal and multispectral maps.

One of the leading fixed-wing drones designed specifically for mapping farmland, the eBee AG is very similar to the eBee X, which is SenseFly’s leading all-round drone. The eBee AG has a flight time of around 45 minutes and can cover over 300 acres of land in one single flight. It comes with a dual-camera system that compromises an RGB and multi-spectral camera. The RGB camera can capture high-quality images that can be turned into accurate centimetre level orthomosaic maps thanks to its RTK system. Multi-spectral cameras capture image data under different wave lengths that will highlight any issues with crops and indicate if there are any pest infestation, disease or irrigation problems.

This is Sensefly’s flagship drone, its suitable for many industries including agriculture as it is compatible with a range of cameras. It has a robust design that makes it suitable for use in many situations and thanks to its PPK/RTK system, it can provide aerial images with survey-grade accuracy. It has a flight time of 59 minutes, which can be extended to 90 minutes that will allow users to cover around 500 hectares of land.

This is a hybrid drone that takes the best of both fixed-wing and multi-copter drones, it has a fixed-wing design but comes with vertical take-off and landing capability (VTOL) similar to that of a multi-copter drone. With a flight time of 55 minutes, this drone can map hundreds of acres of land with sub-centimetre level accuracy, making it one of the best mapping drones on the market.

The following is a small selection of crop spraying drones.

The DJI Agras T30 is one of the newest crop spraying drones that is suitable for all types of agricultural spraying needs, It boasts a huge 30 litre tank, a robust design that can be flown in harsh weather conditions thanks to its IP67 rating and can cover around 40 acres in one hour. It comes with an optimised plunger that can pump out 8 litters per minute and comes with 16 nozzles that have a spray range of 9 meters. The drone has a front and back FPV camera for improved visibility and it has an advanced spherical radar system for safer flying.

This is an agricultural drone designed for crop spraying. It has a 20L capacity and has a maximum flight time of 15 minutes (depending on the load). It can cover 12 hectares in one hour and comes with an optimised spraying system and comes with 8 nozzles that have a spray width of 7 meters. The drone can be used for spraying, fertilising even seeding. It built to fly in harsh weather conditions and can be flown in both day and night and has an advanced obstacle avoidance system for safer flying. The drone has a built-in RTK system and along with the RTK dongle on the remote controller, farmers will be able to set its autonomous flight modes within centimetre level accuracy so that it only fly’s and sprays over necessary areas.

This is similar to the T20 but has a 16 litre payload capacity, it can cover 10 hectares in one hour and comes with RTK GNSS technology and an advanced obstacle avoidance system.

There are a couple of other crop sparing drones manufactured by DJI, but they are only available through certified resellers. These drones are the DJI Agras MG-1P and MG-1S, they have a payload capacity of 10 litres, come with autonomous flight modes and have an obstacle avoidance system.

The agriculture industry is using precision or smart farming methods to find innovative ways to increase their yield, reduce expenses and improve the health of crops. Drones are a fast way to map out fields easily without having to use manned aircraft or land-based equipment like rovers and laser scanners which is time-consuming and not very efficient. Drones are having a positive impact on farming and this trend is likely to continue as drone technology is utilised more and more in the agricultural industry.