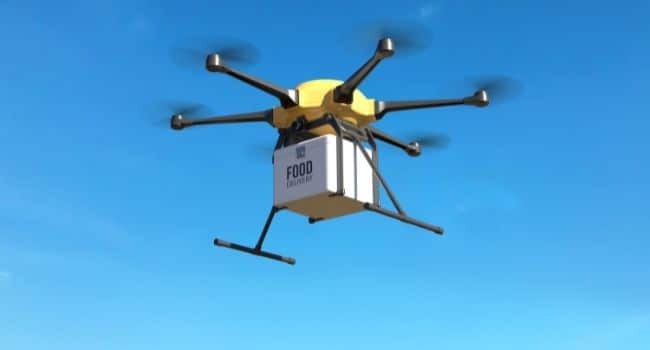 Can drones carry things? sure, they can! You may have read a couple of my articles on the benefits of drone delivery and how the technology is being adopted by many organisations in their logistics supply chain. Drones for delivery can carry different types of stuff, depending on the drones’ payload capacity. From lightweight takeaway food and vital medical supplies to heavy goods weighing hundreds of kg, delivery drones can carry a wide variety of products.

Passenger or taxi drones are probably the most exciting area in drone technology, it is set to revolutionise urban air mobility. Taxi drones will decongest city roads, allow people to reach their destination faster and reduce the use of fossil fuels, which is always a good thing.

However, many people may want to know if the consumer drones they fly in their backyard and the local park can carry and drop things if the situation required it? The short answer is yes, but there are caveats as there are quite a few things you will have to take into consideration before attaching a payload to your drone.

One of the main factors that you will have to take into consideration is that if you make any unauthorised modifications to your drone, the warranty may be voided.

If it is an expensive drone, the best way to protect yourself is to get insurance, just in case, something happens to the drone.

My personal view is that you shouldn’t make any kind of modifications to your drone that may affect your warranty or insurance claims.

However, if you ever find yourself in an emergency situation where you may need to use a drone to send some vital supplies, it may be useful to know what kind of payload they can carry.

How Much Weight Can Consumer Drones Carry?

All drones have an official weight capacity, this includes their battery, props, camera, sensors and all internal components as well as the frame.

Officially, consumer drones are not meant to carry anything else other than accessories authorised by the drone manufacturer.

So, it is not possible to say with certainty how much weight a drone, that is meant for recreational purposes, can carry.

However, after perusing YouTube for videos to see if anyone has tried testing the weight limits for consumer drones, I found several videos where people have carried out limited tests., of course, these are not scientific tests, but they do provide a broad picture of what a drone is capable of carrying.

For example, this video from a popular drone YouTuber, tested the weight limits for the Mavic Air 2 and Mavic 2 Pro.

Another famous drone YouTuber, tested how the Phantom 4 Pro would perform under different payload capacities, you can watch the video here.

You can also find people testing the payload capacities for the Mini 2, Phantom 3, Mavic Pro and both the DJI inspire drones.

What these tests show us is that most consumer drones can lift and carry a couple of pounds worth of payload. However, because they are not meant to be used this way, the motors start to overload, and the battery is drained faster thus significantly reducing the flight time.

I don’t think people should use consumer drones to lift and carry things, unless the situation requires it as shown in the video below.

I have written a more extensive article on the subject of drones for delivery, this method of transporting goods via air albeit at low-altitude is set to revolutionise urban air mobility.

Most drones that are used for delivery can only carry payloads that weigh a few kg, for example, the drones used by Wing, which has seen great success in delivering food, medicine and groceries in Australia, can only carry items weighing no more than 1.2kg.

Zipline, a drone delivery company that has great success in delivering blood and other vital medical supplies in Rwanda and Ghana, their fixed-wing drones have a maximum payload capacity of around 2kg.

Most other drone delivery companies use drones with similar payload capacities, this is mainly because most of the items being delivered are vital supplies that need to be in the hands of the people who require them very quickly.

By limiting payload capacity, drones can operate at their optimal level and allows deliveries to be made faster.

Drone delivery has been going on for a few years and has recently started to pick up pace as more companies start adopting drones in their supply chains, especially in the final part of the journey or last-mile delivery as it is known in the logistics world.

Right now, most of the stuff delivered by drones are lightweight items like medicine, takeaway food, groceries etc.

However, there are a few companies that are utilising drone technology to transport heavy goods between their distribution centres.

One of these companies is JD.com, they are one of China’s largest retailers and started delivering via drones to rural communities in 2016.

They have since expanded their drone delivery service around China and even have their own logistics division in which drones are starting to play a huge role.

JD.com designs and manufactures its own drones and in 2020, they introduced two of the largest unmanned aerial vehicles for delivery purposes.

These two drones, which are also known as autogyros, can lift over a hundred kg worth of goods and travel over 100km on one battery charge.

JD.com have been leading the way in drone delivery technology in China and are having great success with this delivery method.

Volocopter, a German-based company, are making huge strides in the area of passenger drones, however, they have also developed a delivery drone for heavy goods called the Volodrone.

It has a maximum payload capacity of 200kg and has a range of around 40km and can be used in a number of industries to transport heavy cargo.

Another company that operates drones for heavy lifting is Drone Delivery Canada (DDC).

This company offers drone delivery solutions for all kinds of cargo and their service is being used in a number of different industries.

Currently, they have 4 delivery drones, the largest is called the Condor, unlike their other 3 drones, this one runs on gas it has a payload capacity of 180kg and a range of 200km.

I am sure there are other drones for heavy lifting, but these are the ones I found with some quick research.

Yes, passenger or taxi drones are real and what used to be in the realms of science fiction movies, is now becoming a reality.

There are a number of companies that have made some huge strides in the advancement of urban air mobility.

Urban air mobility will transform the way we travel in and around cities and make journeys much quicker, cheaper, ease congestion and make streets much safer.

Of course, one of the biggest benefits of taxi drones will be to the environment as they are electric vehicles and will be powered by intelligent batteries. This will eliminate the need for fossil fuels which will also help with reducing overall costs.

Companies that are currently in the testing phase of assessing the viability of their models include Ehang, Volocopter, Astro Aero Space, Vertical Aerospace, Joby Aviation, Airbus and Lilium.

Most of these passenger drones are known as electric vertical take-off and landing vehicles or eVTOL.

They can carry between 1-4 passengers, can travel at speeds of up to 200km and some are piloted while others can be remotely controlled or fly completely autonomously.

Can drones carry things? I am sure you know the answer by now, yes drones can carry things, however, if you are thinking of attaching accessories to your consumer drone, you should be very careful and make sure not to overwhelm the drone products that it will struggle to carry and may even damage the drone.

However, as we have seen, there are other types of drones that are being used for delivery purposes and they can carry anything ranging from products weighing a few pounds to hundreds of kg.

One of the most exciting areas of drone technology is passenger or taxi drones, this will revolutionise civilian transport, making journeys faster, cheaper and environmentally friendly.