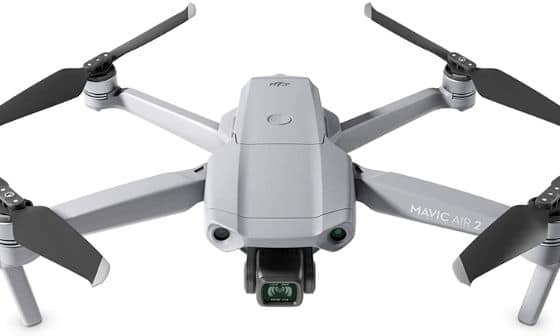 The DJI Mavic Air 2 is a fantastic little drone that comes packed with many of DJI’s innovative features that have made it the leading consumer drone company. The drone has a 1/2-inch image sensor that is capable of recording 4k videos at 60fps and capturing 12MP & 48MP images in RAW & JPEG formats. The drone comes with several intelligent flight modes and is equipped with obstacle avoidance technology for safer flying. It’s a great little drone that is suitable for beginners and drone photography.

The Mavic Air 2 is one of DJI’s least expensive drones for photography, it costs under $800 and comes with many impressive features. It’s an update to the original Mavic Air and comes with some incredible improvements. Some of the biggest improvements over the original Mavic Air is a higher-quality camera that comes with a 1/2-inch Quad Bayer image sensor, 48MP images, 4k videos at 60fps, 8k time-lapse videos longer flight time and advanced autonomous flight modes. In this review of the Mavic Air 2, we shall go through its major features and see why it is a very popular drone for photography.

One thing you must remember is to register your drone with the FAA (USA) or CAA (UK).

If you plan on using the Air 2 for commercial purposes or to make money, you will need to obtain the Part 107 certificate if you live in the USA.

For UK residents, no additional certificates are required other than obtaining the Flyer & Operator ID.

However, if you determine that your commercial operations will be near people, you may need to obtain the General Visual Line Of Sight certificate (GVC). This is an online exam that can be taken from home and is overseen by a CAA recognised assessment entity (RAE), more information can be found on the CAA website.

This is a beautiful looking drone that comes with many of DJI’s innovative features including its foldable architecture, a design feature that has made many of the Mavic drones very popular and widely copied.

The DJI Mavic Air 2 is a little larger and heavier than its predecessor, but not by much, it weighs around 570g and measures 183×253×77 mm in its unfolded form.

Foldable drones like the Air 2 are great to travel around with, they don’t take up much space in your luggage and their weight and design make them easy to carry around.

The Air 2 is powered by a smart lithium polymer battery that has LED lights to indicate its power level.

The battery provides the drone with around 34 minutes of flight time in perfect conditions, however, most people should manage around 30 minutes, which is still very good and on par with DJI’s more expensive drones.

To extend the flight time, it’s best to purchase an additional battery, this will save you the nuisance of having to wait for one battery to fully re-charge before being able to operate the drone.

There are LED lights underneath each rotor arm, these will help to indicate when the drone is in different flight modes and help to identify any issues with the drone.

The Air 2 comes with a more advanced obstacle avoidance system than its predecessor, it has sensors on the front, back and bottom that help the drone navigate around obstacles and provide a safer flying experience.

However, it should be noted that the obstacle avoidance system only works when the drone moves forward and backwards and not when it flies sideways.

There is an LED light on the bottom that will help you navigate the drone in low light conditions.

Like the original Mavic Air, the Air 2 comes with an internal memory capacity of 8GB, it also has a memory card slot that supports memory cards up to 256GB. There is a list of recommended cards in the manual.

One of the differences between this Air 2 and previous Mavic drones is the new controller. It’s a much larger controller, which many people may prefer than the smaller ones that came with older Mavic drones.

There is a smartphone attachment that pulls out from the top, you can attach a large smartphone but not a tablet.

The controller is powered by an internal lithium polymer battery, and it comes with DJI’s OcuSync 2.0 advanced transmission technology, which is another upgrade, this will allow you to view live video footage from a maximum range of 10km.

There is a switch that lets you choose between the 3 flight modes, LED lights to indicate battery power level, buttons for take-off, return to home, videos/photos and a dial on the top to control the gimbal.

Also, unlike previous Mavic models that use the DJI GO App, the Air 2 uses the newer DJI Fly App to view flight data, FPV, access the autonomous flight modes, quickshots and camera settings as well as other features.

The Fly App is easy to use and has some useful tutorials, it’s not as feature rich as the GO App, but for most people, it will be more than enough to use the drone to its fullest capability.

The biggest upgrade is definitely the camera, the drone comes equipped with a 1/2-inch CMOS sensor that uses Quad Bayer technology to enhance video and images quality, especially in a low-light environment.

Image sensor size is a huge factor in the overall quality of the camera output, the drone 1/2-inch senor with Quad Bayer technology allows it to capture 48MP images in both RAW & JPEG formats.

There are multiple photography modes that include panorama, AEB, interval, burst and single shot

The Air 2 comes with an additional photography mode called SmartPhoto, using a combination of scene recognition & hyperlight technology as well as HDR, it automatically optimises images to produce the best results in any type of environment.

The camera is stabilised by a 3-axis gimbal that will reduce image and video distortion and can be tilted in 3-directions for better viewing angles.

The Air 2 camera can record video footage in 4k at 60fps with a maximum recording speed of 120Mbps. This is a huge improvement over the original and with its D-Cinelike 8-bit colour profile, the camera can record over 16 million colours, allowing users to shoot HDR videos.

The camera can record slow motion video footage in 1080p in either120 or 240fps and capture 8k time-lapse videos with its hyperlapse feature.

The hyper-lapse feature can be used via 4 autonomous flight options, they are waypoint, free, circle and course lock.

Overall, this is one the best camera drones in its price range, you can capture some spectacular images and videos that can be used for commercial purposes without having to spend over $1000.

The drone has three flight modes, normal, sports and tripod, there is also altitude hold mode that is activated whenever the GPS signal is weak and/or the vision systems are disabled.

In normal mode, all the features of the drone are accessible, in sports mode the obstacle avoidance system is disabled. Tripod mode is similar to normal mode, however, the speed is limited to 11 mph.

The drone can achieve a maximum speed of 42 mph in sports mode and has a wind resistance of 23 mph.

The Air 2 comes with several autonomous flight modes, this includes the upgraded versions of active track and point of interest.

There is also an intelligent return to home feature, this can be activated manually via the remote controller, or the app and it is activated automatically whenever the drone is low on battery or if the signal is lost between the controller and drone for more than 11 seconds.

As for flight performance, the Air 2 is easy to operate and very fun to fly thanks to its advanced flight features and the intuitive DJI Fly App.

Live video transmission is streamed in 1080p at 30fps thanks to the advanced OcuSync 2.0 technology and with very little latency.

You can easily get around 30 minutes of flight time on a good day and even in windy conditions, the drone holds up well.

The DJI Mavic Air 2 is one of the best drones in its price range and is suitable for drone photography. If you don’t want to spend over $1000 on a drone for photography, the Air 2 is one of the best options. Although I would seriously consider the much newer Mavic Air 2S, it comes with a larger image sensor, has a 10-bit Dlog colour profile, a longer transmission range and a more advanced obstacle avoidance system.