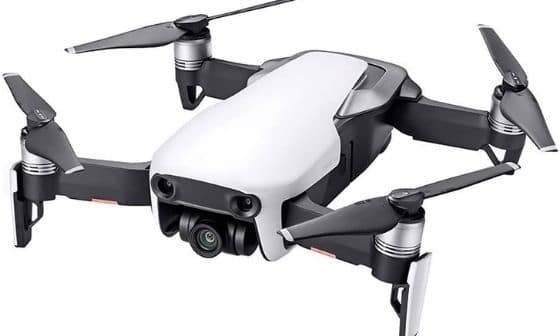 The DJI Mavic Air is small, lightweight drone that comes with many good features and is very easy to operate. Its two main features are the camera that can record 4k video footage and 12MP images in both RAW and JPEG. The other impressive feature is its 3-way obstacle avoidance system that will help reduce the chances of damaging your drone. Other features include intelligent flight modes, QuickShot mode, automatic return to home and 21 minutes of flight time.

The DJI Mavic Air Drone is an old drone but remains very popular thanks to its many impressive features. This drone has been specifically designed for those who want to take their aerial photos and videos to a whole new level. But is it worth buying? Let’s find out.

The DJI Mavic Air is a sleek drone that features a 4K camera, up to 21 minutes of flying time, and a transmission range of 4km. It folds up into a tiny package that makes it perfect for travelling with you anywhere you go. If this sounds like your dream drone, then check out our DJI Mavic Air review for more information on whether or not this is the right product for you.

The DJI Mavic Air is elegantly designed, it’s lightweight but still very durable and even holds up well in slightly windy conditions. The drone comes with a smart battery that can last for up to 21 minutes, although, most people will manage around 18-20 minutes.

Other design features that make the DJI Mavic Air great for travellers include its foldable arms, which allow you to easily pack it away in your backpack.

For travellers who live by the ‘pack light’ philosophy, this is a very big plus point as it allows you to take full advantage of your luggage allowance without making you go overweight.

This foldable body design also allows it to fit into a camera bag or under an aeroplane seat. It’s much smaller than most other high-end drones, however, since it weighs over 250 grams, you will need to register the drone with the FAA or the CAA.

The drone has an internal memory capacity of 8GB, the first DJI drone to come with this feature, there is also a micro SD card slot on the drone that will allow you to expand its memory to a maximum capacity of 128GB.

The Mavic Air controller follows the same design aspects as the drone itself, it’s small and compact, which makes it easy to pack.

It’s comfortable to hold and has a pair of handles that fold out from the bottom, these are also used to attach your smartphone.

It has a transmission range of 4km and is powered by an internal lithium polymer battery. There is a battery level indicator on the front and buttons for capturing images and videos on the top as well as a dial to control the gimbal.

For FPV and to see flight data, you will need to download the DJI GO 4 app, this will give you access to extra features such as intelligent flight modes, camera settings, editing your images & photos as well as viewing live video footage.

The DJI Mavic Air is equipped with a 1/2.3 inch CMOS sensor that can capture 12-megapixel images and record 4k video footage at 30fps.

It can capture images in both RAW & JPEG and produces fantastic quality photos and thanks to its features that allow you to play around with exposure levels, the camera is able to take good images even in low-light environments.

Shooting photos in RAW format will allow users more flexibility in post-processing to enhance the overall quality of the image. This is why professional photographers always advise people to shoot in RAW.

There are multiple photography modes including panorama, timed, burst and AEB, the latter of which will allow you to create images with a higher dynamic range in post-processing.

The camera can also produce 32MP panorama photography by stitching together 25 images in 8 seconds.

The Mavic Air was the first drone of its size and weight to come equipped with a camera capable of recording video footage in 4k.

It can record videos in 4k at 30fps at a recording speed of 100Mbps, this provides smooth crystal clear video footage that is comparable to many higher-end models.

Videos can be captured in D-Cinelike or normal colour profiles, D-Cinelike will provide a higher dynamic range, so it’s best to always use this option.

Overall, the camera on this drone is very good, especially for its current price, although DJI have stopped production of this drone, you can still find some good deals on marketplaces like Amazon and eBay.

The default is the positioning mode, the intelligent flight modes are enabled as is the obstacle avoidance system.

In sports mode, the drone can reach its maximum speed of 28 kph, intelligent flight modes are disabled as is the obstacle avoidance system.

The altitude hold mode will be automatically enabled if the GPS signal if the vision positioning systems are disabled or if there are problems with the drone’s compass.

The Mavic Air was one of the first drones of its size to come equipped with an obstacle avoidance system.

This is a very useful feature that will reduce the chances of crashing your drone and help you fly more safely.

It’s not an omnidirectional obstacle avoidance system, like the ones on the more expensive DJI drones, but the sensors do work, and it will help you minimise the risk of crashing as long as you fly safely.

There are several intelligent flight modes that can be accessed by the DJI GO App, these include Active Track, which has three sub-categories, these allow the drone to follow a subject from behind, parallel or from a stationary positioning by using the camera gimbals rotational feature.

The intelligent flight modes are Tap Fly, which allows users to tap anywhere on the map and the drone automatically flies to that position. There is also a smart flight mode called point of interest, in this mode, the user can choose a position on the app and the drone will orbit that area.

There is a feature called QuickShots, which allows users to create short cinematic videos totally hands-free from different shooting modes.

It’s a bit of a gimmick feature, but it sure is fun to use, especially for taking selfies and short videos with family and friends.

The drone also has an automatic return to home feature, this only works in areas with a strong GPS signal and can be activated automatically via the app or the return to home button on the controller.

The return to home feature is activated automatically if the signal is lost or the battery gets low on power.

Like most DJI drones, thanks to their advanced technology, the Mavic Air is easy to operate. I would advise against flying this drone in windy conditions if you are a complete beginner, especially in sports mode.

The intelligent flight modes are fun to use, especially the QuickShot mode and the images and videos are of very good quality.

In the fast-moving world of drones, the Mavic Air is quite old, despite only being released in 2018, however, its still an excellent drone and well worth its purchase price. It’s a good choice for beginners and people who are looking for a cheap drone for photography.

If you want more choices at a similar price range, click on the button below.