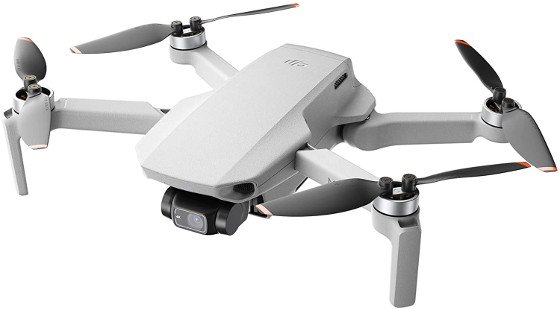 The DJI Mini 2 is a small compact foldable drone that weighs less than 250g and still comes with many of DJI’s innovative technological features. It’s the successor to the Mavic Mini and its upgrades include a 4K camera, a triple GPS module, 5 Quickshots for hands-free cinematic videos and 31 minutes of flight time. The Mini 2 also comes with DJI’s OcuSync 2.0 technology for a longer control range and allows you to view live HD videos in 720p resolution. A very good drone for beginners, photographers, and travellers.

When it comes to high-end consumer drones, DJI are constantly raising the bar and with the DJI Mini 2, they have raised it again. In this review of the DJI Mini 2 drone, you will find out what this drone has to offer and why it is probably the best drone for under $500.

DJI are the leading consumer drone brand, especially drones that used for professional photography. However, until the release of the Mavic Mini, most of their drones were expensive and usually cost around the $1000+ mark.

The DJI Mini 2 is the successor to the hugely popular Mavic Mini and it comes with a couple of upgrades whilst maintaining more or less the same size and weight.

If you are in search of a cheap beginner-friendly drone for photography, the Mini 2 might be the drone for you.

So, when you first take a look at the DJI Mini 2, it looks very similar to the Mavic Mini and you may be mistaken into thinking that there are not any major differences between the two drones. 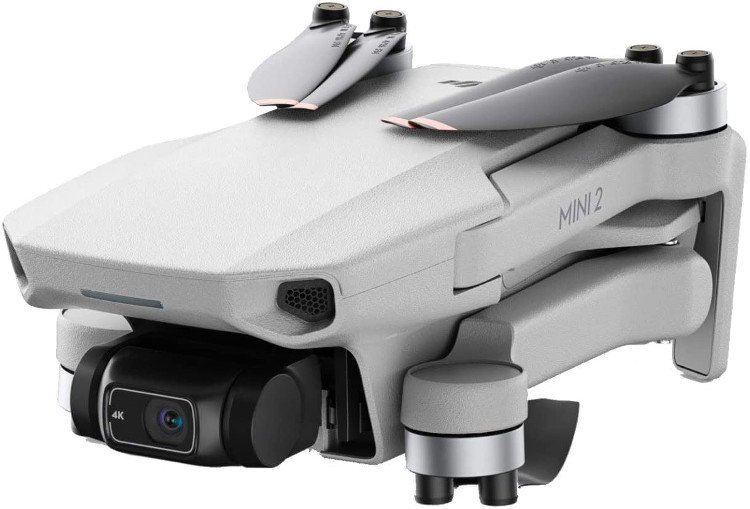 The DJI Mini 2 is a small foldable drone that weighs less than 250g this includes the battery weight. DJI have purposely engineered this drone to weigh less than 250g just like they did with the original Mavic Mini. This is because if you want to just fly for fun, you will not need to register the drone if you live in the UK, Canada or the USA.

The foldable structure also makes the drone very compact and great to travel with, if you are a professional travel photographer and looking for a good drone to expand your services, a small foldable drone like the Mini 2 is an excellent choice.

One of the minor cosmetic difference between the Mini 2 and the original Mavic Mini is the LED light on the front of the Mini 2. This light is customisable via the DJI Fly app which allows you to change the colour of the light.

The drone comes with powerful brushless motors, these motors allow the drone to fly steadily and hover more accurately. Brushless motors are efficient and last longer and they are also easier clean and maintain so that they always perform at optimal levels.

The drone is powered by an intelligent lithium polymer battery, this is the same type of battery that powers most advanced drones nowadays. They have features that minimise the risks of overcharging, short-circuiting, swelling and making sure that the battery always works at optimal conditions. This is a 7.7v 2250mAh battery that provides a flight time of around 31 minutes, which isn’t much different from the Original Mavic Mini, this is still a very good flight time and especially for a drone that costs less than $500.

If you are planning on using this drone to provide professional photography services, it is a good idea to purchase a couple of extra batteries, this will allow you to extend the flight time without having to wait for the battery to fully recharge.

There is a micro SD card slot on the rear end of the drone, it takes memory cards of class 3 or above and it is best to record videos and photos on a memory card instead of your phone to get the best quality.

If you purchase the Mini 2 fly more combo package, you do get a lot of extra accessories and this includes 2 additional batteries and a nice shoulder carry case for the drone.

Another upgrade to the drone is its triple GNSS module, most drones have a combination of GPS+GLONASS, the Mini 2 adds the European satellite network GALILEO, so there is even more global navigation coverage. This results in a more precise drone positioning accuracy on the app and better flight stabilisation.

You can also fly the drone in areas with a weak GPS signal because it has a vision positioning system on its belly that includes an optical flow and infrared sensor.

One other significant change is the drone’s remote controller, this controller looks a lot similar to the Mavic Air 2 controller. It’s a lot larger and is shaped like a box, it uses DJI’s innovative OcuSync 2.0 technology which will allow users to control the drone from a maximum distance of 10km. 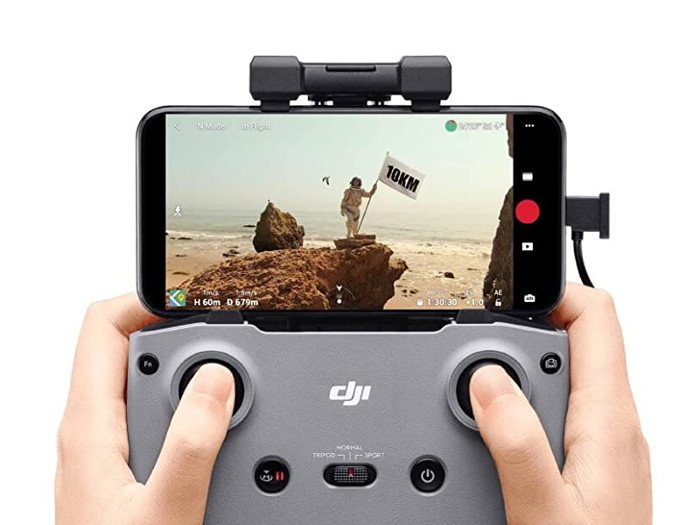 There is a smartphone attachment on the top and it is powered by an internal lithium polymer battery which allows for a few hours of operation before a recharge is needed. It has a switch in the middle that allows you to toggle between its three main flight modes which are normal, sports and cinematic. There is a return to home button and the power button on either side of the flight mode switch and some LED lights that indicate the battery level.

I actually like this controller more than the smaller controller on the Mavic Mini and despite its bigger size, it is relatively comfortable to hold.

Like the original Mavic Mini and the Air 2, the DJI Mini 2 uses the new DJI Fly App that will give you access to its FPV and CineShots feature. This app has been developed for beginners, it’s very easy to use, has some simple tutorials and is updated frequently. It’s compatible with both iOS and Android devices and the interface displays data about the drone’s height, distance, GNSS status, camera settings and a small map of where the drone is positioned. It also has a simple video editing suite with templates you can use to enhance your videos and share them on a select range of social media platforms.

There is no doubt that one of the main reasons for the popularity of drones is their cameras. They allow you to see and experience the world from a unique perspective and see places that you may not have otherwise seen.

With DJI Mini 2, you get access to a professional flying camera that allows you to record video footage in 4k at 30fps with a recording speed of 100Mbps. The camera has a 1/2.3-inch CMOS sensor with an 83° FOV and has an aperture of f/2.8.

Images are captured in 12MP in both JPEG and RAW and it has an auto exposure bracketing feature that will allow you to enhance your photos with a higher dynamic range of colours in post-processing. The camera also allows you to capture three types of panorama photography and you can fit ND filters over the lens to get the exact exposure levels you want.

As the drone comes with DJI’s advanced transmission technology, the live video feed to your smartphone is transmitted in 720p at 30fps.

The camera also comes with a digital zoom feature, this is not as good as having an optical zoom feature, but still a decent feature to have if you want to get closer to a subject matter without moving your drone. It has 2* zoom capability for 4k/2.7k and 4*zoom for 1080p.

Does The DJI Mini 2 Have Obstacle Avoidance?

No, unfortunately, the DJI Mini 2 does not have any kind of obstacle avoidance system, which is disappointing seeing that the newly released Hubsan Zino Mini Pro does come with this feature. This was an upgrade that was expected as the Mavic Mini was also lacking any kind of autonomous flight mode. However, for some reason, DJI decided not to include flight modes like Active track, tap fly and orbit mode. Hopefully, if they release a DJI Mini 3, it will come with an obstacle avoidance system.

No, unfortunately, the DJI Mini 2 does not come with any autonomous flight mode like follow me, waypoint, or orbit mode. It does have an intelligent flight mode called QuickShots, however, these are pre-programmed and you have no control over them.

One of the disappointing aspects of the DJI Mini 2 is that it does not come with intelligent flight modes. However, it does come with the automatic return to home feature that is present in all other DJI drones. This is a safety feature that is activated whenever you lose connection with the drone or whenever the drone battery gets low on charge.

Like most advanced drones, flying the DJI Mini is very easy, it helps that there is a button for one-click take-off/landing which makes it suitable for beginners. Despite its small size and weight the drone even holds up relatively well in mildly windy conditions and it doesn’t affect the overall video or photo quality thanks to the 3-axis gimbal. In its sports mode, the drone can reach a maximum speed of 37 mph, which is pretty fast for a non-racing drone. The FPV feed is clear (as long as you fly in good weather conditions) and the QuickShot mode is fun to use and the return to home function is accurate.

Overall, this is an excellent upgrade to the original Mavic Mini, the DJI Mini 2 drone comes with some excellent features that includes a 4K camera, panorama photography and 31 minutes of flight time. If you are looking to get into drone photography the Mini 2 makes a good starting point. If you want other options at a similar price range, check out my list of the best drones under $500.