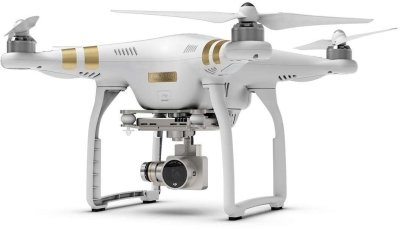 DJI Phantom 3 Pro is a professional drone with a 4k camera, 3 axis gimbal and advanced features. This drone has a flight time of up to 23 minutes and has a transmission range of up to 5km. It also has an advanced autonomous flight mode such as Point of Interest, Follow Me and Waypoints. This is a fairly old drone and DJI stopped production a while back, you can still find used models from online retailers like eBay, however, I would advise that you think about purchasing something more recent, especially if you want to use the drone for photography. Click on the button below for the best drones for photography.

The DJI Phantom 3 Professional is a very old drone and DJI stopped production a few years back, however, you can still find people selling their old models if you are really interested in purchasing one. When it was first released, it was an innovative drone with some very advanced features. It was one of the first consumer drones to come with a 4k camera, 3-axis gimbal and autonomous flight modes.

The DJI Phantom 3 Professional was released in 2016, back then it was one of the best consumer drones on the market, especially for photography.

The drone follows the same design elements as previous phantom drones, it’s a large drone (compared to the Mavic drones) and has an all-white colour scheme with gold accents on its front rotor arms.

The drone weighs just over 1.2kg and measures 35cm diagonally, it will require registration with the FAA or CAA.

Like other Phantom drones, it is well built and has a robust design that holds up well in slightly windy conditions and can withstand the occasional bumps.

It comes with a dual GNSS receiver that will allow pilots to track its position accurately and also provides stability during flight.

The drone is powered by a smart lithium polymer battery that provides it with a flight time of around 23 minutes.

One of the distinctive features of all phantom drones are their landing legs, these help the drone land more safely and protect the gimbal and camera in the process.

The drone has LED lights underneath each arm, these indicate flight status and also help with troubleshooting.

Behind the gimbal, there is a micro SD card slot that can take up to a maximum of 64GB memory card with a rating of class 10 or above.

The drone’s remote controller has a nice ergonomic design, its curved shape makes it comfortable to hold and it comes with DJI’s long-range transmission technology, Lightbridge.

The controller is powered by an internal battery and there is a smartphone holder on the top. There are a few LED lights on the front that indicates the battery charge level and buttons for take-off, automatic return to home, video/photos and a couple of dials on the top for the camera settings and gimbal control.

For FPV and to access the drones other features, you will need to download the DJI GO App, which is available on both Android and iOS devices.

This was one of the first DJI drones that came equipped with a 4k camera that allowed photographers an easy way to capture amazing aerial photography with little hassle.

It can capture 12MP images in both RAW and JPEG formats and has multiple photography modes.

Video footage can be recorded in 4k at 30fps with a maximum recording speed of 60Mbps and encoded in H.264 format.

The camera is stabilised by a 3-axis gimbal that will help reduce distortion and with the drone Lightbridge transmission technology, you will be able to stream live video footage in HD from 5km.

The drone has 3 flight modes, positional, altitude and function, the positional mode is the default mode. This mode works only when there is sufficient GPS signal and the drone’s vision sensors are enabled.

The drone goes into altitude mode when there is no GPS signal, and the vision sensors are disabled. It’s much harder to operate in this mode, especially for beginners but it is a good way to improve your drone piloting skills.

The Phantom 3 Pro also comes with some innovative flight modes that allow pilots to operate the drone completely autonomously. These smart flight modes include course lock, follow me, point of interest and waypoint.

Another intelligent feature of this drone is its automatic return to home function which is activated whenever the drone goes out of range or when the battery gets low on charge.

The drones overall flight performance is impressive, you can get around 20 minutes from a fully charged battery and thanks to its advanced flight controller, it is relatively easy to operate, even for beginners.

When it was first released, this was a very impressive drone, however, it is no longer in production and you can only find used models from third-party sellers. If you would a good drone for photography, there are some brilliant alternatives like the DJI Min 2, Mavic Air and Mavic Air 2. Alternatively, click on the button below for more options.