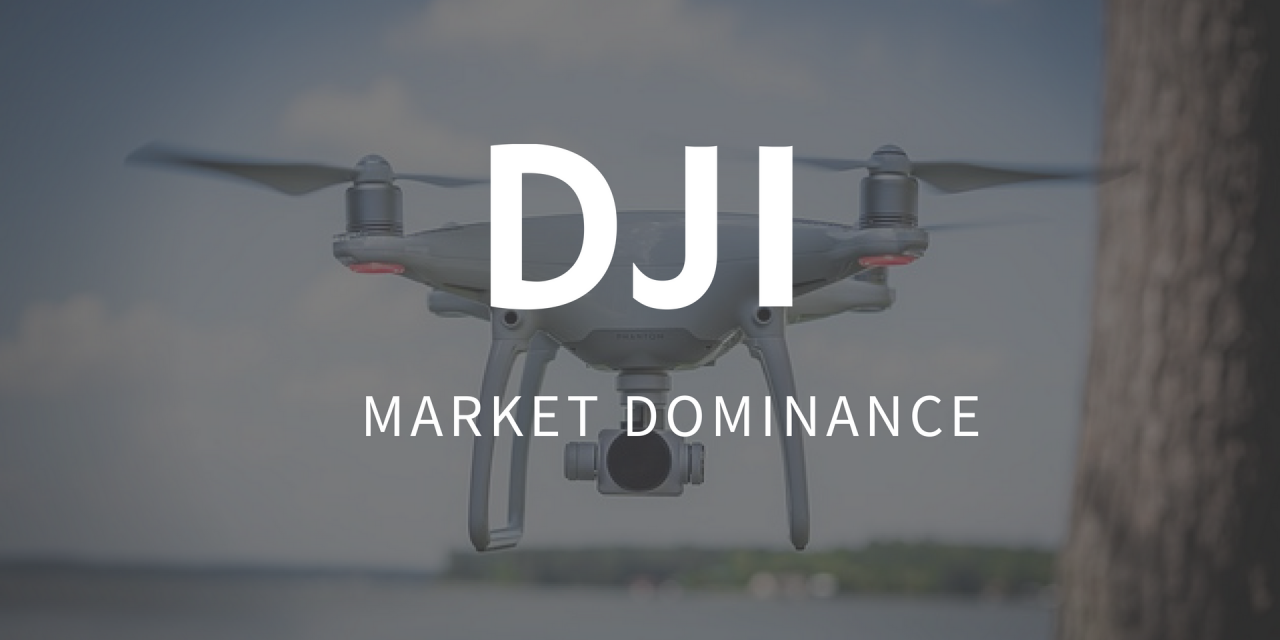 DJI have cornered nearly 70% of the Worldwide consumer drone market, while many of their competitors fall like flies and many having to cut jobs to reduce costs, DJI keeps on churning out brilliant drones. It seems like DJI’s only competitors are DJI themselves.

In the US DJI control 50% of the consumer drone market, that is quite staggering when you take into account how crowded the market has gotten and the rising competition. How have they managed to dominate? Read on and all will be revealed 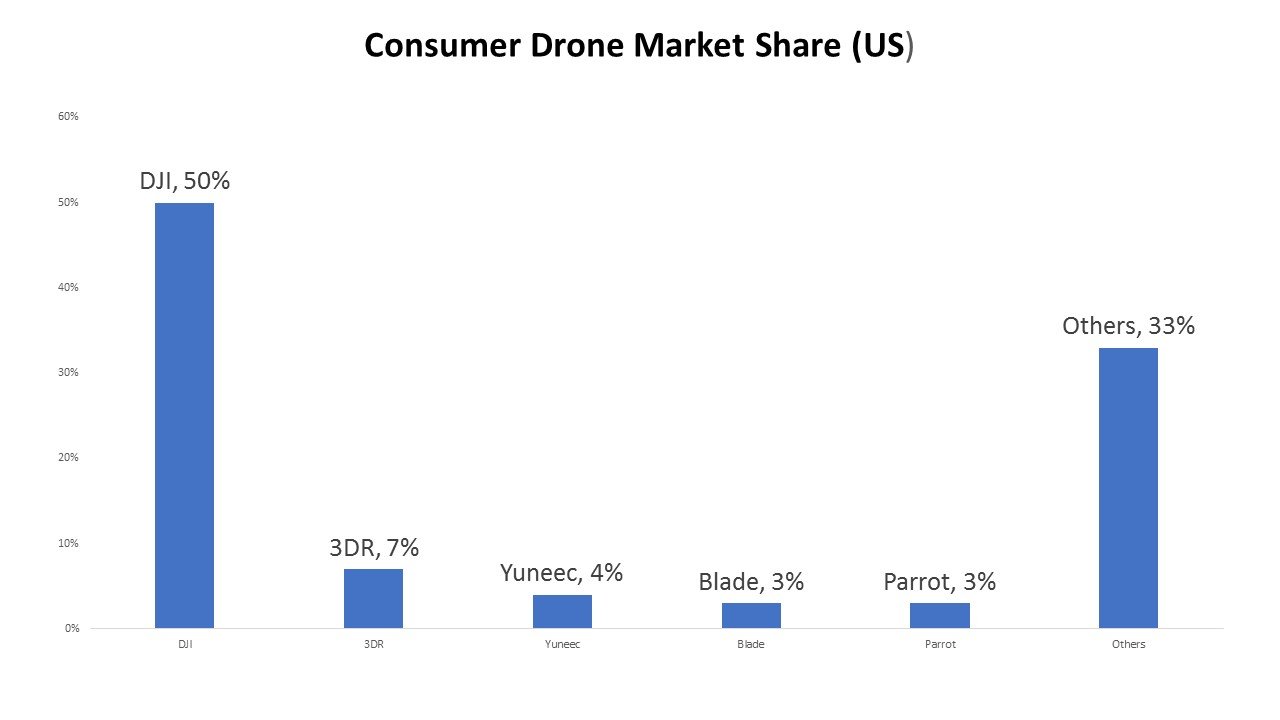 So, how has DJI managed to dominate the consumer drone industry to such an extent that many of its competitors are now looking at the software and commercial side of drone technology?

DJI was founded in 2006 by CEO Frank Wang, originally making flight control systems for helicopters, he and the company moved on to making consumer drones, specifically quadcopters.

Although they had no interest in making consumer drones, it was only through a business contact from New Zealand that he realised the huge potential this industry had to offer.

The competition for consumer drones back then was almost zero, the main player was a German manufacturer, but theses drones didn’t come ready to fly, you had to construct them, download the code and it didn’t have mass appeal, just to tech hobbyists.

DJI took advantage of the situation, produced a multirotor that could be bought off the shelf ready to fly. It was a success and they more or less cornered the consumer drone market overnight.

They released the first iteration of the Phantom range of drones in 2013 and it turned out to be a huge success that it produced 7 more drones just in the Phantom series.

Although they have recently started to discontinue many in the Phantom series, they continue to be some of their most popular drones.

Around 2014 DJI and GoPro were on good terms, GoPro was making awesome action cameras and DJI were encouraging people to attach GoPro cameras to their flagship drone, the Phantom 2.

They were even discussing releasing a drone together, but things took a sour turn when GoPro wanted 2/3 of the profits while DJI wanted 2/1. According to DJI CEO, Frank Wang, he felt GoPro were treating them like an OEM company and felt disrespected.

The discussions ended on a sour note and later GoPro would announce they were going to produce their first drone. At the same time, DJI were starting to make better cameras and none of their latest drones were compatible with GoPro cameras.

As many will know, GoPro announced the release date of their Karma drone and a few days later, DJI released their Mavic Pro (My favourite Drone). Not only was the Mavic similar in design to the Karma but DJI got a head start in the drone wars by releasing earlier than the Karma.

Unfortunately for GoPro, their headaches didn’t stop there, not only did they have to watch the Mavic be a huge success but when GoPro finally did release the Karma, it had a defective design which made the battery fall out in mid-flight.

Like many of their competitors, they have had to make some cuts to their workforce because of slow sales for the Karma and DJI’s continued expansion of their growing arsenal of high-end drones.

GoPro were not the only company feeling DJI’s heat, with their relentless onslaught to near complete market domination, many of DJI’s other competition had to re-think their business model.

3DR stopped producing their solo drones after less than stellar sales and with DJI dropping prices and churning out new drones, 3DR just couldn’t keep up. This despite the fact the solo had very positive reviews and was thought of the first smart drone.

The failure of the solo drone to take off also led to 3DR making some necessary job cuts, however, they were one of the better-funded drone start-ups and so they quickly refocused more on the corporate side of drone technology.

Another company that many thought would challenge DJI’s dominance was Yuneec, they also had to lay off staff. A couple years ago they received $60 million funding from Intel but despite this partnership and producing some very good drones like the Typhoon Q500 and Typhoon H, they too have had to make some changes due to DJI’s success.

Earlier this year, Parrot, the French drone manufacturer had to lay off a third of their drone staff because they failed to meet their sales target. Parrot have been making RC aircraft’s longer than most, despite being in the industry longest, they too are looking more towards the commercial side of the world of drones.

How have DJI managed to corner the market?

In my personal opinion, they do everything brilliantly, from making awesome drones to marketing them and the continued strive to innovate.

They have a 1500 strong team in their research department (which dwarfs their competition)  and they have partnered with Sony to produce their camera components.

They also have their own manufacturing facilities which let their engineers take a drone from design to creation pretty quickly.

Although there is a myriad of reasons why the solo failed (read this Forbes article for more information on 3DR’s failure) Chris Anderson thinks one the reasons the solo failed to take off is because DJI were producing new drones and cutting prices on their year old models. So, while the 3DR was retailing the solo for $1700 the Phantom 3 was going for $1000 and DJI were and still are producing better models.

The only area where they are not dominating yet is drones for beginners and kids but that may change with the release of the Tello drone.

Many make the comparison between how Apple dominated the smartphone market, I like to make another comparison, one that may gibe hope to its rivals.

The smartphone was an evolution from the cell phone and initially, the Swedish mobile phone company, Nokia, dominated the market.

Unfortunately for them, they didn’t adapt fast enough to the smartphone revolution and now are irrelevant.

Technological advancement is moving at an exponential rate, who knows what the drone world will look like in 5-10 years’ time.

Maybe DJI will still be king, may be another company innovates something that catches the industry by surprise and corners the market. For now though, let’s just enjoy the awesome drones that are on the market, especially those from DJI.