The Dragonfly KK13 is a great looking drone that looks very similar to the Parrot Anafi. It has a nice foldable design and on paper comes with some great features like a 2k camera, a GPS module and smart flight modes. However, not all of these features work as they should, which is unfortunate because I really wanted to like this drone. It has a flight time of 28 minutes and a transmission range of around 1.2km.

Hi and welcome to my review of the Dragonfly KK13 HD camera drone.

Someone bought this drone to my attention, I have never heard of the brand before but decided to take a closer look at the drone as it comes with some good specs and has a very nice design.

Drones are very fun to fly, especially ones that come with an HD camera and intelligent flight modes, the Dragon KK13 comes with many advanced features and on paper seems like a really good drone.

However, as you will see from this review, there are some issues with this drone that could prove troublesome and the way it is advertised is quite deceptive.

So, one of the reasons I wanted to review this drone is because I really like the way it is designed. It is a foldable drone which is my favourite type of drone, they are usually noticeably light and easy to carry around.

This makes them the best type of drones to travel with, if you are a frequent traveller the Dragonfly KK13 would have made a good drone to take on your travels if it didn’t have some serious issues.

The Dragonfly KK13 has a unique folding design that I have only seen in one other drone and that is the Parrot Anafi. My guess is that they copied the same design elements as the Anafi is a very popular drone, however, it is quite an expensive drone and so not suitable for everyone.

The Dragonfly KK13, on the other hand, costs less than $200 and so is within the budget of a lot more people. However, the design is where the similarities end because the Parrot Anafi is suitable for professional photographers and comes with a lot of advanced features while the Dragonfly is a simpler drone with some decent features and a good camera.

It is not a huge drone, even when it is fully expanded, it measures 20*20*26 cm and weighs around 400g. So, it’s not a very heavy drone as well, however, as it weighs more than 250g, you will need to register the drone if you love in the UK, Canada or the USA, even if you are just going to be flying for recreational purposes.

For most other countries, there are no weight restrictions if you just want to fly for fun, however, please still check that the rules are wherever you live just to make sure that you comply with the rules.

The drone has a sturdy build and is made from ABS plastic, it’s not a fragile drone but despite what it says on the product page, you cannot fly this in windy conditions.

It’s also one of the reasons this drone has a top speed of around 30 km/h which is quite fast for a non-racing done.

The rotors have some extended points shaped like upside down cones that act as landing legs and the side of them there LED lights that look really cool if you fly the drone at night. These light also another a couple of other purposes like indicating when the drone compass has been fully calibrated and if a certain problem occurs, they will start flashing in different colours.

Something I want to mention, and I may mention again near the end of this review is regarding the micro SD card slot. To record your photos and videos, there is a micro SD card slot on the bottom of the drone, however, there have been many complaints that the card reader is defective with many people saying that it does not record properly.

Hopefully, they rectify this problem in future models but at the moment, you should beware of its issues.

The drone is GPS enabled so you can locate the drone’s position on the app and it also allows the drone to hover more accurately. There is an optical flow sensor on the bottom of the drone that will allow you to fly in areas with a weak GPS signal, so if you live in a large house, you could fly it indoors.

The official flight time for this drone is around 28 minutes, however, this is an estimate for flying in perfect conditions. So, the flight time will be more around the 22-26-minute mark, which is still pretty decent for a drone that costs less than $200.

However, if you want to extend the flight and not wait for the 3 hours it takes to fully recharge the battery before flying again, I highly recommend purchasing a couple of extra batteries.

Speaking of batteries, the drone is powered by a 7.6v 3000 mAh LiPo battery, this is a nice-looking battery that fits on top of the drone and has 4 small LED lights that indicate its power level. 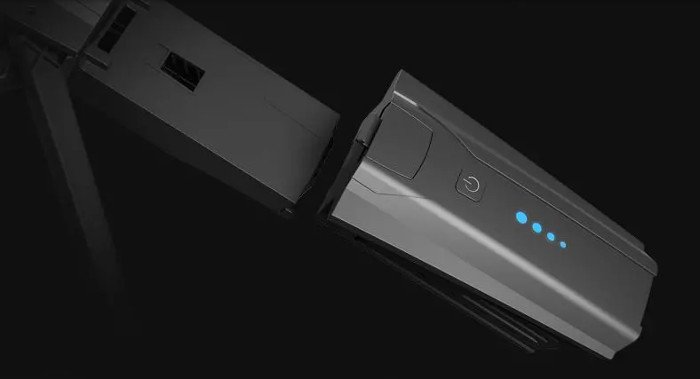 The drones remote controller is similar to may other drone controllers I have reviewed on this site. It has a very minimalistic design and is powered by an in-built 350 mAh LiPo battery which lasts around 5 hours before you have to recharge it.

It has a pair of handles that fold out from the bottom and a smartphone holder that pulls out from the middle. There is a large LCD screen in the middle that will display vital telemetry data about the drone and most of the buttons are easily identified by their icons, so you will know what each one does without having to refer to the manual.

The transmission range is around 1200 meters but only 700 meters if you want to use the FPV features, usually the range is a bit exaggerated so expect something a little less than what is stated.

To make use of the drones FPV features and smart flight modes you will need to download the official app which is called Swift GPS. Its available on both Android and iOs devices, however, another complaint about this drone is regarding the app which seems to crash a lot and the FPV feed isn’t always clear. This is a new drone, so I hope they improve it but at the moment, it’s not looking very good. 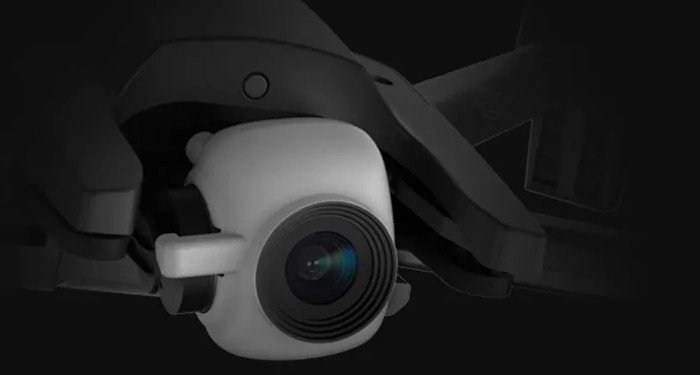 Now, one of the main reasons I love to fly drones is because of their cameras, they allow you to view the world from above and experience places you may not have otherwise been able to see.

I had high hopes for this drone, although it is technically a 4k drone, it cannot record video footage in 4k but only images. So, the advertisement is a bit misleading (which I have seen in other drones as well).

Although it is supposed to be stabilised by a 2-axis gimbal, you still get some jello effect and shakiness, this isn’t really a huge problem as you will not be using it for professional reasons but still a little disappointing, especially when so much is made out of the camera on its product page.

The camera has a wide-angle view that will allow you to capture more detail and it can be remote adjusted 170° for better viewing angles.

It can record video footage in 2.5k at 25fps and stream live video footage in 1080p quality, however, as I mentioned, the micro SD card is defective, so recording is not possible and the app is buggy so the FPV feed is not the best.

If you are looking for some genuinely cheap 4k drones, check my list of the best 4k drones at affordable prices.

Like a lot of these newer drones that seem to be popping up all time, the Dragonfly KK13 comes with three intelligent flight modes. However, as you need the app to be working properly to make use of these flight modes, they are a hit and miss.

Hopefully, they rectify these issues because, on paper, this is a very good drone.

The Dragonfly KK13 comes with the following intelligent flight modes:

Follow me– The drone locks on to you and follows you wherever you go.

Orbit – In this mode, you can lock the drone on a point of interest and the drone will orbit it automatically.

Waypoint – This flight mode allows you to draw a flight path on the app and the drone will fly along the route and come back home automatically.

Some other features include having the ability to take images and videos through the mere gesture of your hand and it is compatible with VR headsets.

It also comes with an automatic return home feature, this can be activated manually via the remote controller or it will be activated automatically if you lose connection or if the battery level gets low on charge.

While drone fly’s well and is easy to control, the main features of drone still need a lot of work. The live video feed crashes and freezes a lot and the smart flight modes do not always work as they should. This has the potential to be a really good drone, but at the moment it’s not a drone I am fully behind.

This a really great looking drone and comes with some great features, unfortunately, many of these features do not work as they should. I had great hopes for this Parrot Anafi lookalike but at this moment I would not advise you to purchase this drone. If you want to learn more about the drone and see its current price click on the button below.