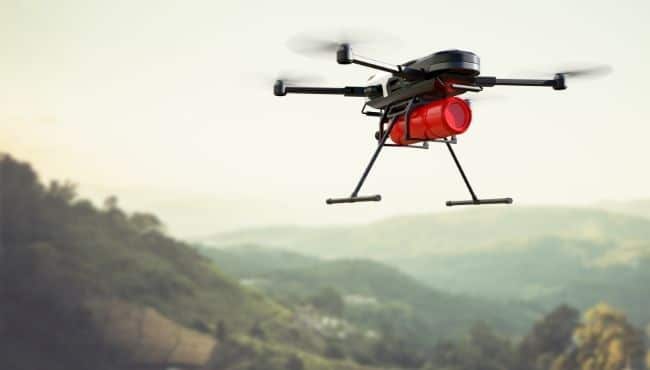 Drones have become incredibly popular for a variety of tasks. They can be used for filming, photography, mapping, and even to deliver packages. It’s no surprise that they’re being used for so many different tasks. Their versatility has made them perfect for many different public safety operations. One area where they are proving to be very effective in helping firefighters. Drones for firefighting are being used in a different number of ways. From allowing firefighters to get a faster and better aerial perspective to using thermal cameras to identify hotspots and find survivors.

In this article, we shall look at the main benefits of using drones for firefighting and the type of drones that are best suited for these types of operations.

Benefits Of Using Drones For Firefighting

Drones are easy to operate and can be deployed very fast, this provides distinct advantages over a manned aircraft, especially when it comes to public safety operations like firefighting.

In the event of a large-scale fire, drones can be immediately deployed, and the affected area can be mapped quickly.

Data about the fire and the area can be acquired immediately and informed decisions can be made by the commander about how to allocate resources and manpower.

Drones can monitor fire conditions by capturing pictures and videos. Drone operators can monitor specific areas to make sure the area is safe for firefighters and other public safety officers to enter. This can help them to stay safe and not get hurt while fighting fires and helping survivors.

Drones can provide a live video feed of the affected area which will allow the commanding officer to relay vital information to those on the ground so that they are aware of any changing situation and make informed decisions as to the situation on the ground changes.

Many drones come with thermal imaging cameras which will aid command central to see through heavy smoke, guide their personnel safely through the affected area and help with identifying hotspots so that they can be extinguished immediately.

Drones for public safety use come equipped with advanced remote sensing equipment, many come with dual camera systems such as a high resolution RGB camera and a thermal imaging camera.

These cameras will help with search and rescue missions in disaster areas, they can fly at low altitudes and fly around areas that are inaccessible by land and impossible for manned aircraft to pass through.

With advanced camera systems like those on the new DJI Matrice 30T, which come with multi-sensor payloads, public safety officers can use high resolution RGB and thermal imaging cameras to find survivors.

Thermal imaging cameras are especially helpful as they can penetrate through smoke filled areas and detect heat signatures to find survivors more effectively.

Another benefit drones have over manned aircraft with regard to search and rescue operations is that they can be deployed much faster which will give drone operators and rescue teams a better chance of finding survivors.

Drones can also be fitted with accessories like speakers and LED lights to reassure survivors that help is coming and they can be modified to carry vital supplies like medicine and food.

After a large fire, whether it occurred in an urban setting or in the wild, it’s important for risk assessment and future reference that firefighters know exactly what happened. Patrolling these areas by land may still be dangerous and very time-consuming.

However, that’s where drones come in, they can help firefighters to assess the post-fire damage through 3D maps. This will reduce health hazards for personnel and can help to figure out what areas need the most attention. The images and videos captured by the drone will also help with understanding the behaviour of the fire and can be used for training materials so that firefighters are better prepared to tackle the next outbreak.

What Type Of Drones Are Used For Firefighting?

The drones used in public safety operations like those used for firefighting are specialist drones that have been built for commercial purposes.

They have a robust build, and some come with an IP rating allowing them to be operated in any type of weather condition.

The most popular type of drones for firefighting are ones that come with multi-sensor payloads, usually ones with a high-resolution RGB and thermal imaging camera.

For example, the London Fire Brigade have invested in types of drone, the DJI Matrice 210 and the DJI Mavic 2 Enterprise.

The Matrice 210 is an industrial-grade drone that has a multi-payload capacity and can be flown in harsh weather conditions. It’s compatible with most of DJI’s Zenmuse cameras which includes the high-resolution X5S, the zoom camera Z30 and both the thermal imaging cameras XT and XT2.

The Mavic 2 Enterprise comes with a powerful dual-camera system that consists of a 48MP RGB camera with 32× digital zoom and a 640 × 512 thermal imaging camera with a 30Hz frame rate.

However, there are a lot more options than the ones I have mentioned, some of these include the following

There are also drones that come equipped with fire extinguishing agents that are especially helpful in putting out fire outbreaks in high-rise buildings. Although there are only a few that have been specifically designed for this purpose, many drones can be modified to spray water, foam and other types of fire extinguishing material.

For example, Ehang is one of the leading passenger drone companies that have made some huge strides with their Ehang 216 eVTOL drone in the area of Urban Air Mobility. They have developed a firefighting drone by modifying the Ehang 216 with 6 projectiles on top that fires ABC dry powder and a high pressure nozzle at the front that sprays fire extinguishing foam.

Another drone that can potentially be used for firefighting purposes is the Volodrone from Volocopter. This is a heavy duty drone that has a large payload capacity, it can be modified to carry large amounts of water, which can then be dropped over wildfires.

A controlled burn is a method that firefighters use to deliberately set small intense fires by burning up dead leaves, dry grass and other types of kindling so that wildfires cannot spread. It is usually carried out manually, which can be dangerous, however, there are solutions that have been developed to light these small intensity fires through the use of drone technology.

Drone Amplified is an American company that has developed a solution for controlled burns through drone technology called IGNIS.

They have developed a type of payload that is compatible with many industrial-grade drones, this payload can carry ignition spheres that are dropped over specific areas to cause small intensity fires. This is a much safer and faster method and keeps personnel out of harm’s way.

Drones are being adopted in many public safety operations like firefighting. Their technology allows them to be used in a number of different ways which will help fire services mitigate the effects of large fires. From monitoring and identifying hotspots to helping find survivors and assessing post-fire damage, adopting drone technology will form a vital part in the fight against large-scale fire outbreaks.