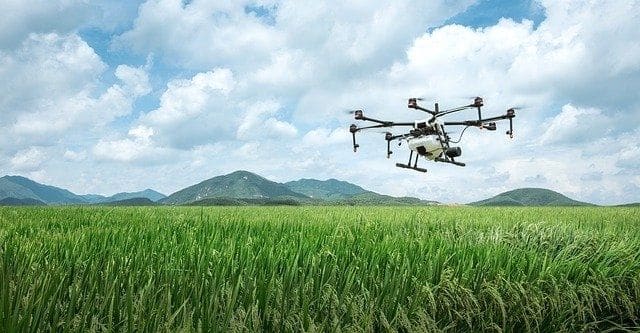 Agriculture is obviously a very important industry, but it faces many challenges, from an exploding world population and urbanization of huge areas of land to labour shortages and inefficient use of resources. The use of precision agricultural practices is helping mitigate many of these issues, but major challenges remain. The application of drones in precision agriculture is expected to help resolve some of these issues and make farming practices more efficient, less time consuming and help with maximising productivity and yield

The use of drones in precision agriculture is growing steadily, although farmers around the world have been slow to adopt this new technology, mainly because of local rules, there is no doubt that where they are being used, they are having a positive effect on the overall productivity of farms as this BBC article shows.

What is precision agriculture?

Precision agriculture is a term that has been around a while now, it refers to farming practices that adopt technology to help improve efficiency, productivity, and yield.

The acquisition of field data via various methods is the backbone of precision agriculture, using high-tech tools, data is collected and analysed much faster which leads to quicker and better informed decision making.

With access to huge amounts of data through technological tools like GPS systems, remote sensors and software applications, farmers will be able to improve the management of their land by understanding what the data is saying and then putting in a plan of action

This will allow farmers to optimise farm operations by allocating resources only where it is needed, this will reduce waste, save costs, and improve efficiency, productivity and maximise crop yield.

In other words, precision agriculture leads to efficient use of things likes fertilisers, pesticides, mulch, and irrigation systems.

However, there is still room for improvements, especially in aerial mapping and spraying and this is where drones are starting to have a positive impact on agricultural operations.

Drone technology has the potential to create significant value for agriculture and provide a solution to many of the challenges facing farmers today.

Drones used for precision agriculture will help improve farm efficiency, increase yields, and reduce costs while reducing risks associated with traditional methods such as pesticide use or heavy machinery.

Drones are being utilised in two areas of precision agriculture, they are mapping and spraying/spreading.

With the aid of drones, mapping huge areas of land can be done much faster than traditional methods.

Not only is it quicker and more cost effective to map with drones, but farmers will also not need to compromise on data accuracy.

This is because all commercial drones come with professional-grade cameras and some form of GPS correctional technology, which will ensure that maps that are developed through drone imagery will have accurate geospatial data embedded in them.

Drones that are equipped with multispectral or thermal cameras will help identify a wide range of issues related to plant and soil health.

They can show early signs of pest infestation, stress and disease which will allow farmers and agronomists to take quick action and mitigate the issue before they become a serious problem.

Another benefit of drones in agriculture is that because they are so easily deployable, farmers will be able to collect data on a more regular basis, giving them up to date insight on the state of their fields and allow them to keep on top of any problems before they escalate.

Drones also offer a safer method to spray crops, especially for farmers who use backpack sprayers and have to navigate large areas of land while in close proximity to harmful chemicals.

With crop spraying drones, most of the operation will be semi-automated, farmers will not even have to pilot the drones as they come with autonomous flight modes.

With the aid of RTK GNSS technology, intelligent flight modes and variable rate prescription maps, farmers will be able to only spray on crops that need it, thus reducing chemical use, improving efficiency, maximising productivity and keep costs down.

Drones are also aiding in the growth of sustainable farming methods, by using resources more efficiently and reducing the use of harmful chemicals and heavy machinery.

What is the best drone for agriculture? There is no simple answer, there are many factors that will determine what type of drone farmers or drone service providers should invest in.

One key factor will be the size of the fields to be mapped, farmers who own small to medium sized farms should probably invest in a multi-copter drone, whilst mapping large fields is more suitable with fixed-wing drones.

Another benefit of multi-copter drones is that they only need a small area to take off and land, whilst fixed-wing drones require a much larger area.

The one major disadvantage with multi-copters is their flight time (when compared to fixed-wing drones), although, this is starting to change with the likes of the DJI Matrice 300 RTK and the multi-copter drones from Micro Drones.

The following are some of the best drones for agricultural use, for a more comprehensive list, click here.

This is one of the most popular commercial drones on the market, the Phantom 4 RTK comes with a 1-inch 20MP camera, RTK GNSS receiver and TimeSync feature which helps provide centimetre level accuracy for maps. The drone has 30 minutes of flight time and can map around 40 acres of land in one hour.

The Phantom 4 Multispectral drone comes with a 6-camera array that consists of an RGB sensor and 5 sensors that cover Blue, Greed, Red, RedEdge and Near-Infrared bands. All cameras provide 2MP image resolution and are stabilised by a 3-axis gimbal. The drone comes with RTK technology and has a spectral sunlight sensor for enhanced accuracy.

An all weather drone that has been engineered to be flown in the harshest of weather conditions. The Matrice 300 RTK is a robust drone that can be used for a wide range of applications thanks to its multiple payload capabilities. Its compatible with DJI Zenmuse P1 full frame camera as well as the Zenmuse L1 LiDAR sensor. Farmers will also be able to attach multispectral cameras from SlantRange and Sentera via the DJI Skyport connector. Other features include an omnidirectional obstacle avoidance system, RTK technology, 55 minutes of flight time, dual control and a 15km control range.

A powerful quadcopter with a robust design that has been built to be operated in all types of weather conditions. The mdMapper 1000DG comes equipped with a Sony RX1R II full-frame camera that is stabilised by a nadir mount. The drone comes installed with an APX-15 single board GNSS-Inertial module that is capable of direct georeferencing without the need for ground control points. The drone has a long flight time and is capable of covering 80 hectares in one flight.

A hybrid drone that has design features of both a fixed-wing and multi-copter drone. The Gen 2 drone from Wingtra is a multipurpose drone that is suitable for large agricultural applications thanks to its long flight time of 59 minutes different payload capacity. The drone has an IP68 rating as well as being MIL-STD-810 certified, making it one of the most robust commercial drones on the market. The drone is compatible with different types of cameras which includes the Oblique Sony a6100, Sony XR1 II and the MicaSense RedEdge/Altum multispectral camera. The drone has an in-built PPK/RTK GNSS receiver for survey-grade centimetre-level accuracy.

The flagship drone from SenseFly, the eBee X is a fixed-wing drone that is lightweight but has been engineered to be flown in all types of weather conditions. It has a maximum flight time of 90 minutes and can map around 500 hectares of land and with its PPK/RTK solution, it can deliver absolute accuracy down to 3cm. The drone is compatible with multiple cameras including the SenseFly S.O.D.A 3D, SenseFly Aeria X 24MP RGB camera, the MicaSense RedEdge and Parrot Sequoia+ multispectral camera.

The eBee Ag is an agricultural mapping drone that comes equipped with a dual camera that consists of the 24MP SenseFly S.O.D.A and the Parrot Sequoia+ multispectral camera. It has a maximum flight time of 55 minutes and can map around 200 ha of lands in that time. The eBee Ag comes with an RTK GNSS receiver that can achieve centimetre-level accuracy and can capture data for multiple types of index maps to analyse plant health.

This is DJI’s most advanced crop spraying drone that can also be attached with its 3.0 spreading system. The T30 comes with a 30 litre tank and an advanced spray system that comes with 16 spray nozzles and a double plunger pump that provides powerful downward spray action for better coverage. The drone can spray 40 acres of land in one hour and has front and back FPV cameras for monitoring purposes. It has a spherical radar system for safer flying and has an IP67 rating making it resistant to water and dust. The spreading tank can be filled with 35kg of material and can be used to spread fertiliser, seeds and mulch.

The T20 crop spraying drone from DJI is similar to the T30, it has a smaller 20L tank and its spraying system comes with 8 nozzles and 4 diaphragm pumps that can spray 6L per minute and has a spraying width of 7 meters. It can also be attached with DJI’s 2.0 spreading system and has an omnidirectional radar system for safer flying. The drone has a robust design and can be folded up which reduces its size by 80%, making it compact and easier to pack away. It has a built-in RTK GNSS receiver that will allow it to precisely fly along any spraying routes and only spray on plants that need to be treated.

A powerful crop spraying drone that uses an innovative spray system to atomise droplets for better coverage and minimises drift. The drone can spray around 18 ha in one hour and uses an advanced radar system to navigate its way safely through a spraying mission. It can detect obstacles from 30 meters away and navigate its way through uneven terrain at a steady altitude. The drone can also be used to spread seeds and fertiliser and comes with RTK technology for precise spray application.

If you are a drone service provider or a farmer, you should definitely consider investing in drone technology. As you have seen, there are plenty of benefits in utilising drone technology for agricultural operations. Using drones will help acquire data faster, identify issues earlier, make better informed decisions and help maximise productivity and yield.