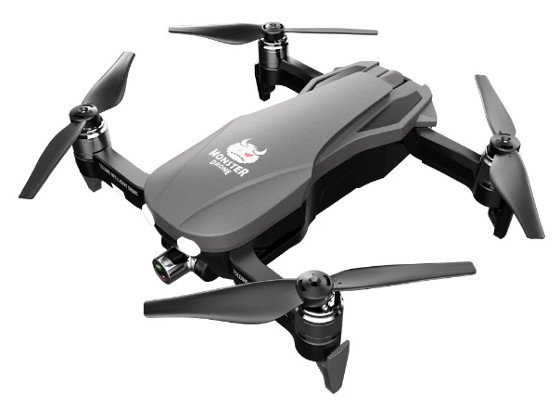 The FQ777 F8 drone is a well-designed foldable drone that looks like a premium drone model and comes with some advanced features but costs no more than $200. It’s a great drone that is suitable for most people, it comes with a decent 2.5k camera that is stabilised by a 2-axis gimbal and can take 4k still images. The drone also comes with GPS, several intelligent flight modes and an automatic return to home feature.

Hi and welcome to my review of the FQ777 F8 drone or the F8 Monster drone as it is also known as. I wonder how they came up with the first part of the name. The F8 Monster drone seems like a reasonable name for a consumer drone but the FQ777 part is more like what it would have been named when it was being manufactured, right?

Anyway, despite my reservation about its name, the FQ777 F8 drone is a relatively new drone that comes with some good features, a decent camera and costs less than $200.

Drones are very popular at the moment and so you have a lot of choices, especially drones that are relatively inexpensive like the FQ777 F8 drone.

So, is the FQ777 F8 drone worth purchasing or are there better choices at similar price points? Carry on reading this review to find out.

So, the first thing I must say about this drone is that it is a good-looking drone, it has a cool foldable design and a nice silver and black colour scheme that gives it a futuristic look. 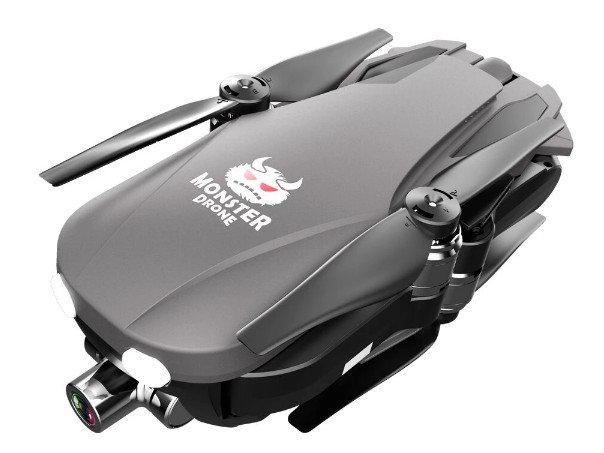 Foldable drones are my favourite type of drones, they look awesome (although I have seen some ugly ones) and are usually lightweight, this makes them easy to carry around and the best type of drones to travel with.

This drone has a solid build, it is made from high-quality ABS plastic and has a premium feel to it despite costing less than $200.

It’s not a very big drone measuring 28*23*5.5 cm, in its folded form it’s very compact and you can probably fit it in a large trouser pocket, although you will not have to because the drone comes with a cool carry case.

It’s a very lightweight drone, the drone alone weighs 230g, which would have been great as it would not have required you to register the drone, hover, the battery ads an extra 170g bringing the total weight to 400g.

This means you will need to register the drone if you live in the UK, Canada or the USA even if you want to just fly for fun. Most other countries do not require any sort of registration for drones that are just going to be flown for recreational purposes, however, I still advise you to check that the rules are just to make sure.

The drone comes with a GPS module that will allow for better flight stability and stable hovering capability. The GPS also allows for the drones autonomous flight modes and automatic return to home feature which is always a nice addition to these types of low-cost drones.

There is also an optical flow sensor on the bottom that will allow you to fly the drone in areas with a weak GPS signal, this also means you can fly it indoors if you live in a large house.

There is a micro SD card slot near the sensor that will allow you to record your videos and images in better quality than the ones recorded on your smartphone. Unfortunately, no micro SD card is included with the package, so you will need to purchase one yourself.

A really useful feature of this drone is its brushless motors, these are powerful and efficient and one of the reasons the drone can reach a top speed of around 39 km/h which is pretty fast for this type of drone. Another advantage of brushless motors over brushed motors is that they last longer and you will not need to maintain them as often, although I still advise you to clean them on a regular basis.

A really nice design feature that gives the drone its premium look are the chrome rings around the rotors, they make the drone stand out and give it a wow factor.

They also help to indicate when the drone compass is fully calibrated, something you will need to do before you fly. They will flash in certain colours when there is something wrong with the drone which makes it easier to troubleshoot and find out what the problem is. 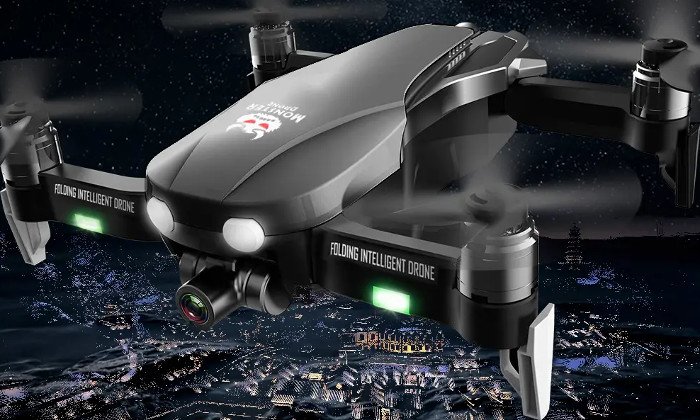 The drone has a flight time of around 27 minutes, which is on the upper end for low-cost consumer drones. However, this is the official flight time and that is usually exaggerated a little bit and is calculated if you fly in perfect conditions. So, expect something more in the range of 22-25 minutes, which is still a good flight time.

The reason for its long flight time is because the drone is powered by an 11.1 2500 mAh LiPo battery, this is one of the more modern modular batteries that keep their charge for longer and thus allow for a longer flight time.

Like I said, the flight time is good, however, if you want to extend the flight time, I advise you to purchase a couple of extra batteries. Fortunately, if you do decide to purchase this drone, you will get the option to add an extra two or three batteries which I highly recommend you take.

One last thing I want to mention is the remote controller, this is a decent looking controller that is powered by an internal LiPo battery so you will not need to purchase any yourself. It’s a simple-looking controller that has a minimalistic design, all of the buttons are clearly identified by their icons and it has a smartphone holder that pulls out from the top.

A cool feature of this controller is the small LCD screen in the middle that will display vital telemetry data about the drone the battery level, height and distance and the number of satellites it has locked onto.

It has a range of around a 1km, which is pretty good, although most people will not fly it that far out and its FPV range is slightly less at 500 meters.

To makes use of the FPV and its smart flight modes, you will need to download the VS GPS app, this app is compatible with both Android and iOS devices and it has a pretty good rating on the Google Play Store.

It’s relatively easy to use the app and its interface is easy to navigate, overall most of the functions work but sometimes the smart flight modes can be a bit hit and miss, this is why its best to use these features when you have strong GPS signal. Like a lot of these drone apps that have been developed by smaller companies, it has not been updated for a while, so this could be a reason why its smart flight modes do not always work.

However, overall, it works and is a lot better than many of the other drone apps on the market. 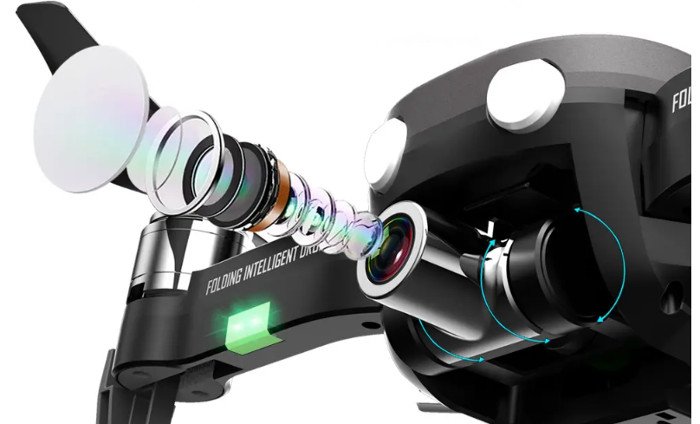 Now, before I go any further, I must say that the FQ777 F8 does cannot record videos in 4k, it is advertised as having a 4k camera, although this is a bit misleading. It can take photos in 4k which good quality for still images, but people may get the impression from the product page that it can record in 4k, which it cannot.

Having said that, it is a good overall camera that is stabilised by a 2-axis gimbal, now this isn’t the most advanced gimbal, so you will notice some distortion like jello effect and shakiness but on the overall, the video and image quality is very good. Not good enough for professional use but then again, this drone is not for professional photographers.

It has a 120° wide-angle lens and can be remote adjusted 60° for better viewing angles, it can record videos in 2.5k at 25fps and stream live video footage in 1080p, although to get this quality, you will have to stay well within the FPV range and fly in very good conditions.

For its price, this is a very good camera and you will be able to take good quality videos and photos, however, if you are looking for a high-quality camera drone, check out this list of the best drones with a camera.

The smart flight modes that come with this drone are the following:

Waypoint – In this mode, you can draw a flight path on the app and the drone will fly along it and come back home.

Orbit mode – With this mode, you can choose a point of interest on the drone app and the drone will orbit it automatically.

Follow me mode – Pretty self-explanatory, the drone will lock onto your phone and follow you from behind.

Another cool feature it comes with is automatic return home, this feature can be activated both manually and automatically. You can press the return to home button on the controller or app to activate this feature and it will be automatically activated if the drone battery gets low on charge or if you lose connection.

This is a very easy drone to fly, it hovers accurately, and the overall flight is stable. It has a three-speed mode, the fastest of which is around 39 km/h, only fly at this speed if you are an experienced pilot. The drone fly’s well in slightly windy conditions although if you are a beginner, I would not recommend you fly in any kind of bad weather. The smart flight modes work but sometimes can be a bit iffy if the GPS signal is weak or if the app starts playing up.

This is a very good drone, it comes with some good features including a decent 2.5k camera and intelligent flight modes. It’s easy to fly and is suitable for most people, don’t believe the hype on the product page regarding the camera, it’s not made for professional use and hence why it costs less than $200. Overall, this is a good drone for people looking to fly for fun and take some decent videos and photos. Click on the button below to find out more and check its current price.