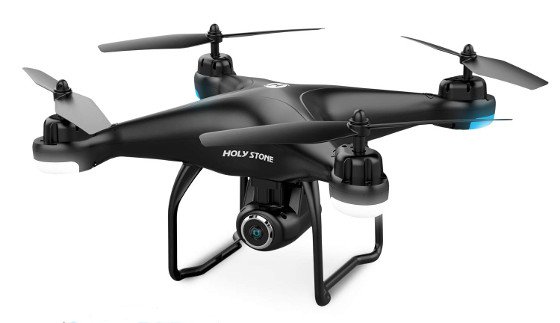 The Holy Stone HS120D is a decent HD camera drone that comes with some useful features like one-button take-off and landing. It has an automatic return home function that is automatically activated if it fly’s out of control range or if the battery gets too low. It has a flight time of around 15 minutes and an official FPV range of 300 meters. An overall decent drone but there are cheaper and better options.

Hi there and welcome to my review of the Holy Stone HS120D HD camera drone.

Holy Stone are a well-established name in the low-cost consumer drone market, I have reviewed several of their impressive drones on this blog.

A few years back, HD camera drones were few in number and very expensive, however, nowadays you are almost spoilt for choice.

The Holy Stone HS120D was released earlier this year and has proven to be a very popular drone, it has over 600 reviews on Amazon and has a 4.5-star rating.

If you are looking for a low-cost drone with some quality features and a decent HD camera, the Holy Stone HS120D is a good choice, however, as you will see from this review, not all its features work as they should and you should consider these flaws before you decide to purchase the drone.

The Holy Stone HS120D looks similar in design to the DJI Phantom range of drones, although it’s not as large and doesn’t come with as many advanced features, hence why it costs less than $200. It has an all-black colour scheme, which I actually prefer to the all-white of the DII Phantom drones.

It’s a very light drone, weighing in at just over 221g, any drones under the weight of 249g will not need to be registered with the local authorities if you are living in the UK, USA or Canada. So, you can freely fly this drone without having to worry about if it’s illegal or not.

Its also a very small drone, not as a compact as a foldable drone but small and light enough that it wouldn’t be a burden to travel around with. The HD camera is mounted on the belly of the drone and there are a pair of landing legs that will help protect the camera when the drones comes to land.

The drone is powered by a 7.4v 1200 mAh lipo battery, this one of the modern modular batteries that keeps the charge for longer and provides a decent flight time. In the case of the Holy Stone HS120D, it has an official flight time of 18 minutes, although test flights have shown that it has a lower flight time, somewhere around 15-16 minutes.

That is still a pretty good flight time for a drone that costs less than $200, however, I would definitely recommend that you purchase an extra battery or two so that you will be able to fly for longer without having to wait a few hours while your battery re-charges before you are able to fly again.

Underneath each rotor, there are some big LED lights that will help you fly the drone at night and they also help to indicate when the drone’s compass is fully calibrated.

The drone remote controller looks similar to that of the DJI Mavic controller, which I like, its small and has a minimalistic design and has two handles that fold out from the bottom. There is a smartphone holder that pulls out from the middle, it can hold a big smartphone but not a tablet. 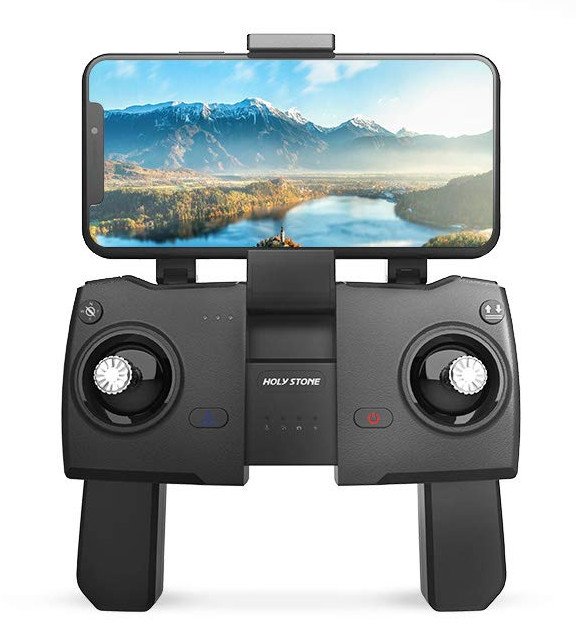 The controller has buttons for automatic home return, emergency landing, one-button take-off and landing and also has two dials at the back that controls the camera angle and speed mode.

The official FPV range for the drone is 300 meters but users have noticed it is way less than this, this shouldn’t really matter, as the Holy Stone HS120D is a toy-grade drone and you wouldn’t want to fly it that far out anyway.

To use the FPV feature, you will need to download the official Holy Stone app which is called the HS GPS Pro and is compatible with both iOS and Android, it’s a pretty decent app, although buggy at times but it is updated regularly and if you follow the instructions on the manual, it should work as expected.

One of the best reasons to purchase a drone is because of their cameras, it allows you to observe the world from above which is always an exciting experience. The Holy Stone HS120D comes with a decent 2k camera that has a 120° field of view, and it can stream live video footage in 720p

There is a micro SD card slot on the back of the camera, it supports memory cards with up to 32GB of storage space and you do get a 16GB card with the actual package. Although you cannot stream 2k video footage, you can record it on the card and then play it back.

However, there have been reports that the quality isn’t always noticeably any different and sometimes it doesn’t even record properly. This may be because the card has not been formatted properly, which should be done before any recording can take place, and also faster cards (class 10 or above) are usually the better option

The camera can take 2MP images which are pretty good, however, one of the main issues with this drone is that it doesn’t come with any kind of gimbal or image stabilisation software, so to take decent quality images, the drone has to be in GPS mode and be hovering if you want the picture to have minimal distortion.

Overall, the camera is decent, you are not going to win any aerial photography awards with this camera, but you can still take some quality videos and images with it.

Headless Mode – This is great for beginners as it makes flying the drone much easier, the drone will always move in the same direction of the controls, so you will not need to differentiate where the head and tail is.

Follow Me Mode – This is an intelligent flight mode that only works with the app. The drone will lock onto your smartphone and follow you wherever you go. This feature is hit and miss, you will need strong GPS signal to make it work and even then the features doesn’t work all the time.

The drone description also says it has tap-fly feature, this is where you draw a path on the app and the drone automatically follows it the route and comes back home.

The drone is pretty easy to fly, especially in headless mode, the one-button take-off and landing feature work well as does the automatic return home feature. The FPV can be a problem sometimes as the app is known to crash and you can lose the FPV feed and I wouldn’t advise new drone pilots to fly without the GPS mode.

Holy Stone have released some good drones over the years and although the HS120D is a decent drone, I personally think there are better options for you, especially if you are a beginner. It’s a low-cost drone and it comes with a good camera and some decent features, click on the button below for further details. However, if you want a better drone at a cheaper price, I highly recommend the DJI Tello, which costs under $150, comes with more features and a better camera, plus it’s made by DJI which means fantastic support and a superior drone app, click here for more information about the DJI Tello Drone