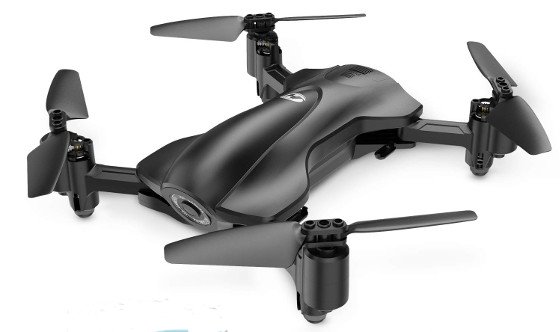 The Holy Stone HS165 is a really good foldable drone that costs less than $200, if you are looking for a compact lightweight drone with some great features and a very good HD camera, this drone ticks all those boxes. It’s easy to fly and with its FPV feature and intelligent flight modes, you can take some great video footage and aerial images. If you are a frequent traveller, this is a great drone to take around with you and capture your travelling adventure.

Hi there and welcome to my review of the Holy Stone HS165 HD camera drone, the latest foldable drone from budget-friendly drone manufacturers, Holy Stone.

Now, I have reviewed a number of Holy Stone drones on my blog and most of them have been very impressive. With the high-end drone market being completely dominated by DJI, Holy Stone have focused on building drones that are cheap but also come with some advanced features that will make flying drones easy and more enjoyable.

The Holy Stone HS165 is a fairly advanced drone that costs less than $200, its lightweight and easy to carry. It’s a foldable drone which makes it very compact and is a great drone to travel around with. 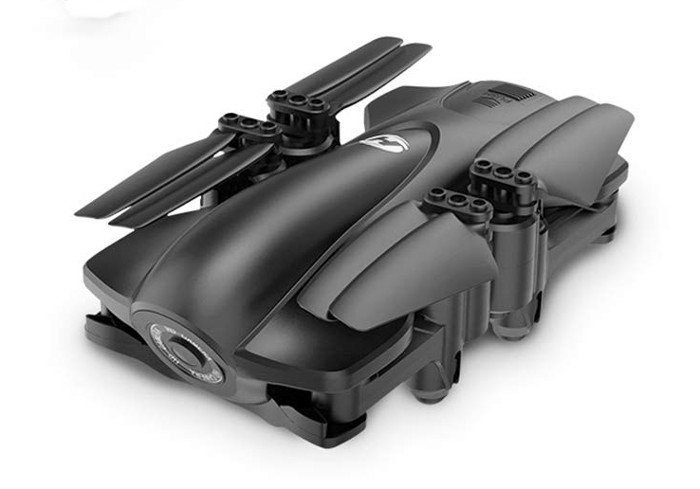 It’s a small drone, it measures just 26*18*5 when the arms are fully extended and weighs just over 170g. In its folded form it even smaller and can be carried around without any problem, its built from high-quality plastic and so if you do crash the drone ( and you most likely will if you are a beginner) there will not be any serious damage.

I really do like the overall design of this drone, it looks futuristic and comes in two colours, all black or white. The 1080p HD camera is mounted on the nose of the drone and is tilted a few degrees downward, I’ll talk more about the camera later on because it is my favourite feature.

Its GPS enabled, so flying the drone is easier and this feature also minimises the risk of losing your drone. Underneath its rotor arms, there are some cool LED lights, these lights help to indicate when your drone compass is fully calibrated and also they look cool and are useful if you ever want to fly during twilight hours.

The drone is powered by an 880 mAh 7.4V lipo battery, this is one of the new range of modular batteries that keep the charge for longer and thus allow for longer flight time. In the case of the Holy Stone HS165, flight time is an estimated 15 minutes, which is pretty good for a drone at its price range.

However, I always advise people to purchase extra batteries, because even though 15 minutes is a good flight time for a drone that costs less than $200, it’s still not enough time to fully enjoy flying a drone.

It’s ergonomically designed and so it feels comfortable in your hands, it actually looks like a modern video games controller and the people who design those things know a thing or two about controllers and comfort!! 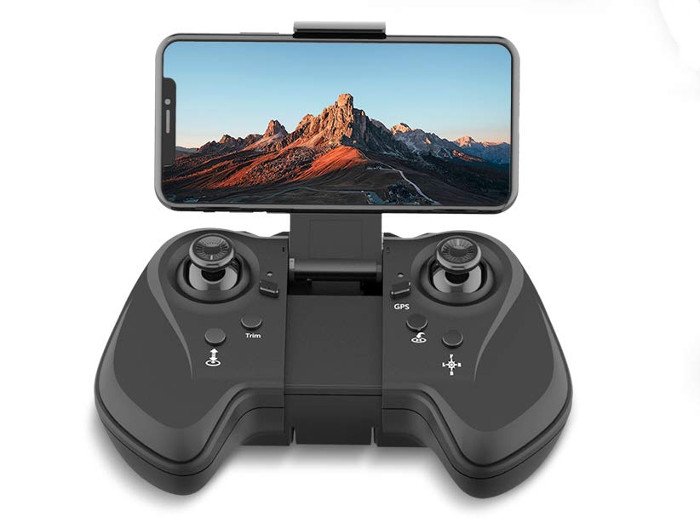 All the controls are easy to reach and have icons on what they each do, so it’s not hard to figure out. There is a smartphone attachment that springs out from the middle, its large enough for a big smartphone but cannot hold a tablet. It’s powered by a 3.7V 300 mAh lipo battery which comes preinstalled and is non-removable. 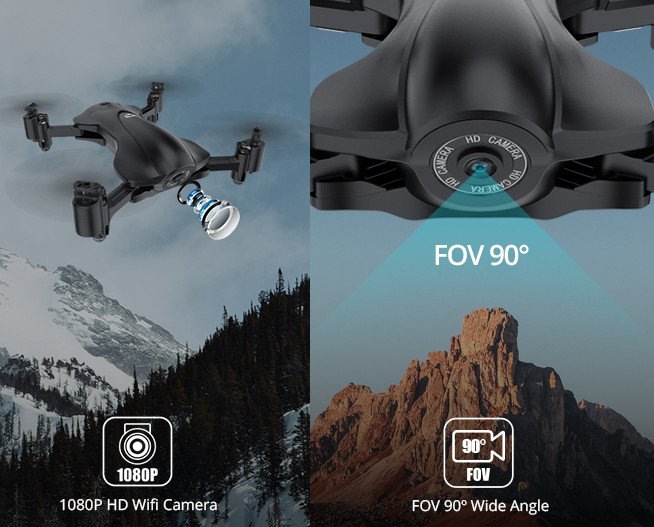 The drone has a 90° FOV which will allow you to capture more details in your images and video footage. You can stream live HD video footage straight to your smartphone via the drone’s WiFi from a maximum distance of around 250 meters. However, that figure is only if you fly in optimal conditions, so expect the range to be a little less than what is officially stated.

There is no gimbal or software for image stabilisation, but the drone does come with a 6 axis gyroscope that will minimise any kind of distortion in your videos and images. The camera will not win you any photography awards and sometimes you the video feed can be a bit grainy but on the whole, it’s a very good camera, especially for the price you will be paying for it.

Another cool aspect of this drone is that you can share your videos and pictures straight to your social media accounts via the drone app.

The HS165 has four intelligent flight modes, they are:

Tap Fly – Draw a custom path on the app and the drone will follow that route on autopilot and come back to its original starting point.

Orbit Mode – This mode will allow the drone to orbit a point of interest from a height and distance of your choosing. This is a really cool way to take selfies and impress your family and friends.

Follow Me – In this mode, the drone will lock on to your smartphone and follow you wherever you go. A great way to record yourself when going for a hike o when travelling around different places and capturing your adventure.

Automatic Return Home – As the drone is GPS enabled it comes with one button return home feature, this minimises the risk of losing your drone. The feature is automatically activated if you lose your connection to the drone or if your battery is low on charge.

The overall flight performance from the Holy Stone HS165 is very good. It holds up well and with its GPS feature, the drones hovering capability is pretty good, you will notice some jello effect on your videos, this is because it does not come with any kind of dedicated video and image stabilisation feature. However, it doesn’t ruin the overall video or image quality and it’s not like you will be using the drone for professional services. It has two-speed modes, the fast mode should only be used if you are an experienced drone pilot because it is

The Holy Stone HS165 is a really good HD camera drone that comes at an affordable price. For less than $200 you get a drone that comes with GPS, intelligent flight modes, a quality HD camera and is relatively easy to fly so it is suitable for both beginners and more experienced pilots. It’s a fun drone to fly and will make a great gift idea for this coming holiday season. Just a quick note that this is a 5G WiFi enabled drone, so it is only compatible with smartphones that have 5G technology.