The Holy Stone HS175 is a small foldable and lightweight drone that comes with some good features and costs less than $200. The drone comes with an HD camera that has a 110° FOV and can record video footage in 2k and capture 4k images. Although it has no gimbal or EIS, the video and image quality is good for its relatively cheap price. This is a GPS enabled drone and also had an optical flow sensor for better flight stability. Other features include smart flight modes, automatic return home and 20 minutes of flight time.

Hi and welcome to this review of the Holy Stone HS175 drone that comes with an HD camera and dual GPS.

Holy Stone are one of the most popular low-cost drone brands, most of their drones are easy to fly and suitable for beginners.

If you are in search of a good drone for under $200 with some advanced features, the Holy Stone HS175 might be what you are looking for.

This is one of their newer models and has proven to be popular with consumers, it currently has a 4+ rating on Amazon and it would make a great gift idea for anyone who enjoys playing with RC toys.

So, one of the first things you may notice is that it is a small foldable drone that looks similar to the DJI Mavic Mini. This isn’t a surprise, since the DJI Mavic Mini is a very popular drone but is quite expensive if you are just wanting to have some fun flying a drone and not use it for commercial reasons.

Foldable drones are my favourite type of drones, they are light and compact, especially in their folded form which makes them easier to carry around and a great choice for a drone to travel with. Another aspect of its design that will please people is that it weighs just over 200g, this is significant because it means you will not have to register the drone if you live in the UK, Canada or the USA.

Drones that weigh over 250g, have to be registered in the countries I just mentioned, however, if the drone weighs less than 250g and you are just going to be flying it for recreational purposes, there is no need for registration.

However, I would like to mention that drone laws are kind of fluid, so please do check what the rules and regulations are for flying drones wherever you live just to make sure that you are complying with the law.

The Holy Stone HS175 drone comes with brushed motors, which was a little disappointing since there are quite a few drones at a similar price range that come with the more superior brushless motors. Still, it’s not as noisy as many other brushed motor drones and it does not affect the overall flight performance of the drone. However, with brushed motors, you will have to clean them on a regular basis to keep them in optimal conditions.

The drone comes with a dual GPS module and has an optical flow sensor on the bottom. Both of these features will allow the drone to fly more smoothly and hover accurately. With the optical flow sensor, you will be able to fly the drones where there is a weak GPS signal, so you could fly it indoors if the place is big enough.

The drone is powered by a lithium-polymer battery that provides it with a flight time of around 20 minutes, which is very good for a drone that costs less than $200.

An added bonus is that you will get an extra battery with the drone package, so you will be able to extend the flight time without having to wait for the battery to fully recharge.

The drone’s remote controller has similar aesthetics as the drone, it’s small and is powered by an internal battery. There is a smartphone holder that pulls out from the middle on which you can attach a large smartphone, but I don’t think it will hold a tablet. There are buttons for take-off/landing. Compass calibration and automatic return home. On the top, you have buttons for taking videos/photos and controlling the camera angle. It’s a nice controller with a minimalistic look and has a range of around 300 meters on a good day. 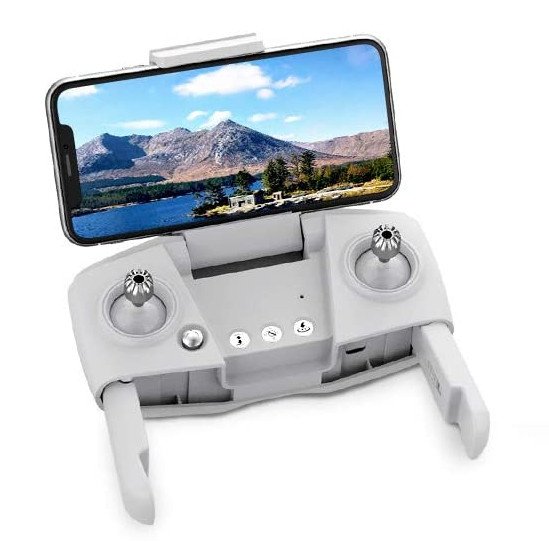 To use the drones FPV and smart flight modes, you will need to download the Holy Stone GPS app, the app is compatible with both Android and iOS devices and has a pretty good rating on both app stores. It has a simple easy to use interface and some basic tutorials, it is one of the better drones apps from a smaller company.

One thing I must note is that the video feed is transmitted over 5G WiFi, so its best that you have a 5G compatible smartphone to use all the features the app provides. 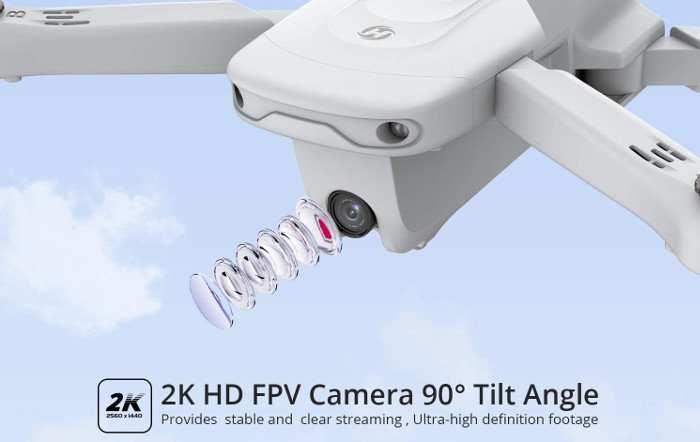 The best feature of this drone (or any drone for that matter) is its HD camera.

The Holy Stone HS175 comes with a fixed wide-angle camera that can be adjusted remotely to get better viewing angles. It is one of the better cameras on a low-cost mini drone and can record video footage in 2k and capture 8MP still images.

As there is no gimbal or electronic image stabilisation on the camera, you will notice distortion but for a cheap drone, that is to be expected and it’s not like you will be using it in any professional capacity, so a little shakiness in the video footage or blurred images will not really matter.

For the best results in both video and image quality, it is best that you record them locally on a memory card, instead of over WiFi on your smartphone.

Overall, the camera on this drone is good, especially for this price, the video quality is excellent and the images are also good. However, if you want more options, check out my list of the best drones under $200, there a couple of drones on the list that actually record in 4k.

The drone comes with 2 intelligent flight modes that will only work in areas with a strong GPS signal. They don’t always work, especially if you have an older smartphone, but when they do work, it is fun to play around with.

In both of these flight modes, you will have control over the camera and allow you to capture images and videos.

Another fun feature is its gesture control mode that will allow you to take images and videos simply by hand gesture. This is a fun way to take selfies and impress family and friends.

The drone also comes with a safety feature called automatic return home, this can be activated by the return home button on the controller. The feature is also activated if the battery on the drone gets too low or if you lose connection, please note that the feature will only work in areas with a strong GPS signal.

The Holy Stone HS175 is an easy drone to fly, it hovers pretty well and overall it fly’s steadily in windless conditions. The package comes with some propeller guards which I advise you to install if you are a beginner as it will help protect the drone from getting seriously damaged should you manage to crash it. As it is a small drone and very light, I would not advise you to fly in any kind of windy conditions, however, if you do, it’s best to use the faster speed mode, so that it doesn’t drift away too easily and make sure to use the propeller guards. The range is around 300 meters, although if you want to use the live video feed, the range is a lot shorter.

Holy Stone are a good drone brand and in the HS175, they have produced another decent low-cost drone. It’s a great little drone that is suitable for beginners and is very fun to fly and comes with a good HD camera. Click on the button below to find out more details and see its current price.