Holy Stone HS220 Review – A Fun Foldable Drone For Everyone 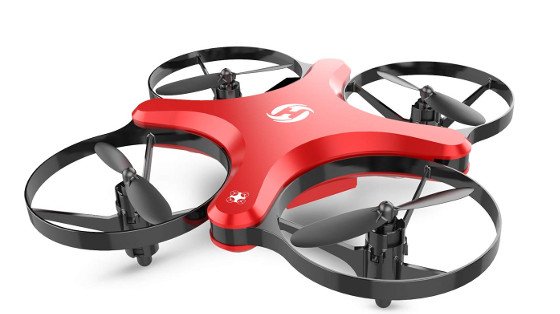 The Holy Stone HS220 is a foldable drone that comes with an unique design, it can be flown in both its folded and unfolded forms and comes with several fun features like an HD camera with FPV capability, one smart flight mode, emergency landing button and it can do 3D flips. The drone has a flight time of around 7 minutes and will make a cool gift for kids and even adults.

Welcome to my review of the Holy Stone HS220, one of the most uniquely designed drones I have come across.

Holy Stone are a well-established brand in the fast-growing world of consumer drones. I have reviewed many of their drones on my blog, most of them are relatively cheap and overall good drones.

They have released a few drones that cost less than $100 and the Holy Stone HS220 is one of them.

If you are looking for a cheap, fun drone with some cool features, carry on reading this review of the Holy Stone HS220, as I may interest you.

Like I stated earlier in this review, the Holy Stone HS220 has a unique design that I haven’t come across in any other drone. When I first saw it, it actually reminded me of a fidget spinner (remember them??), although, a fidget spinner has three ends while the HS220 has four and hence why its called a quadcopter!! 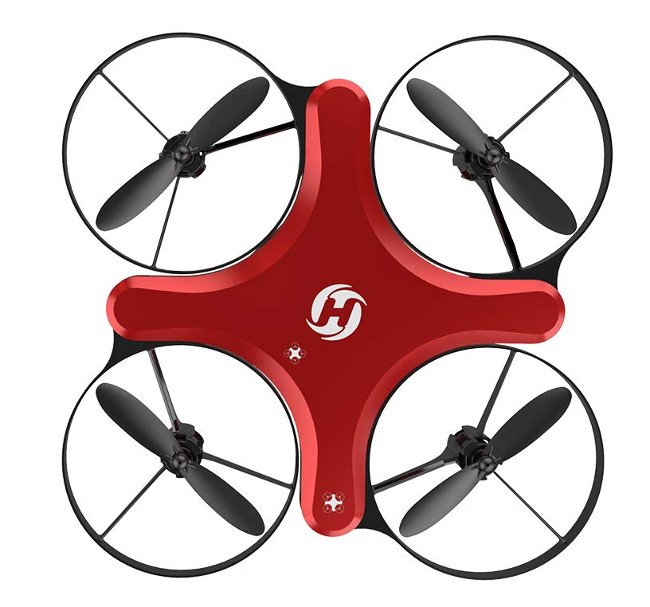 Its made of durable plastic and as you will see from the video further below, it can withstand bumps without being damaged.

In its folded form, the drone has the shape of a square with curved edges, it measures 5.7*5.7*1.57 inches when it is folded up and in its expanded form it measures 7.67*7.67*1.57 inches. So, it’s a relatively small drone but takes up a lot more space when its propeller arms are expanded. 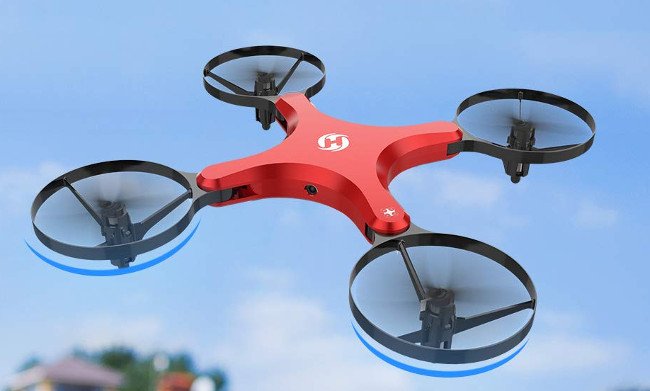 The propellers are encased in a plastic ring that protects the blades and the main body of the drone when it crashes against anything.

As well as being not very big, the drone is super lightweight, weighing around 80g, which means if you live in the UK, Canada or the USA, there is no need to register the drone. You will only need to register any drone if it weighs over 250g, this is only for the countries I just mentioned. Most other countries do not require you to register the drone if you are flying for recreational purposes. However, I still advise people to check their local aviation rules and regulations just to make sure that you know what the rules are and do not break them unintentionally.

Underneath each of the rotor arms, there are small rubber legs for safer landing and an HD camera is fixed on the front of the drone.

Like most drones, the HS220 has some cool LED lights underneath each rotor which look spectacular, especially if you fly the drone at night. The LED lights will also help to indicate when the controller and the drone are paired and when the gyroscope is fully calibrated. 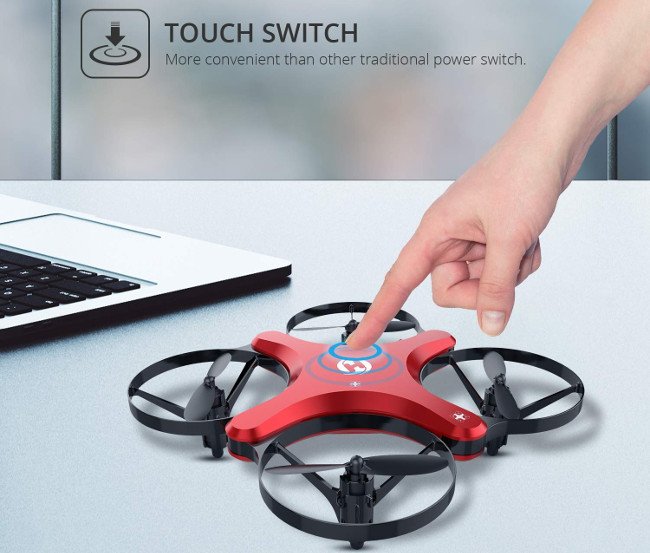 The drone is powered by a 3.7v 750 mAh lipo battery which provides it with around 7 minutes of flight time. This is standard for a toy drone that costs less than $100, although it’s still will not be enough time to enjoy flying the drone. You do get two batteries but the remote controller is also powered by the same battery, so to extend the flight time, it’s always a good idea to purchase at least a couple of extra batteries so you will not have to wait for it to re-charge before flying it again.

One of my favourite things about this drone is it’s remote controller, some controllers are not well-designed and kind of look ugly. Not that it matters but I don’t controllers that are big and bulky, fortunately, the controller for the HS220 is nice and comfortable to hold.

It looks how a modern drone controller should look, the buttons all have icons that indicate what they do and there is a smartphone holder that pulls out from the middle.

It takes the same battery as the drone but doesn’t consume power as quickly, so when the drone battery gets low on charge, you can take out the one from the controller and power up the drone while the other gets re-charged.

You may ask “so how will I fly the drone”, well, fortunately, you don’t require the controller, you can fly the drone via the official app for this drone which is called HS Cross and is compatible with both Android and iOS smartphones.

It’s very easy to use the app and the user interface is well laid out, it is one of the best drone apps on the app marketplace, having a rating of 4 stars on both the Apple App Store and Google Play. 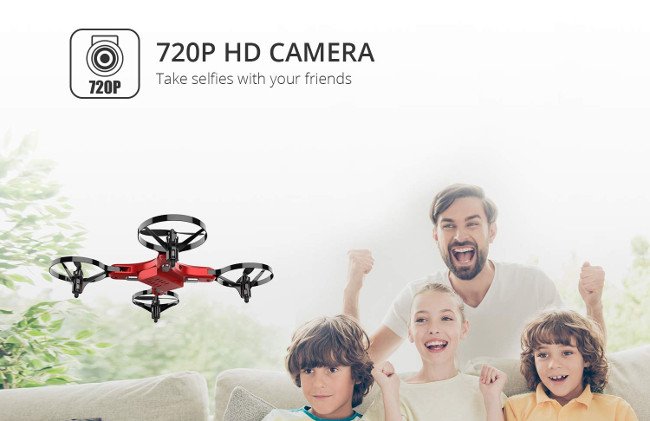 One of the main features of this toy drone is its 720p HD camera, yes even toy drones have cameras now!! It’s not the most amazing camera but then again, you were not expecting a professional-grade drone camera for less than $100. What the camera will let you do is take decent images and videos which are surprisingly good quality when you think about how cheap the drone is. The live video streaming is decent as well, although the app is known to freeze now and again and the transmission range for FPV is around 40 meters.

The drone comes with several advanced features which surprised since it is a cheap drone. These features include the following;

Gravity Sensor Mode – This will allow you to control the drone by moving your smartphone around instead of using the controls.

3D Mode – The app has a mode that will let you view the FPV feed via a virtual reality headset, this will give you a more immersive flying experience.

Custom Flight Path – I was surprised by this feature, it’s a smart flight mode that will allow you to draw a flight route on the app and the drone will fly along the path and come back home.

3D Flips – Does 360 flips at the push of a button, this will impress kids and even adults.

4 Speed Modes – The done has 4-speed modes that will test your flying skills, each mode gets faster, so be careful that you fly in a wide-open area if you want to test out its full speed mode.

As you would expect from a Holy product, the drone performs very well and is easy to operate, all its main features work as they should including the one-key return and 360° flips. Although, please be aware that it is harder to control as the speed gets much faster, so if you are a complete beginner, fly in the default speed mode until you are confident enough to switch to higher gears.

This is a very fun drone to fly, if you are looking for a cheap HD camera drone, the Holy Stone HS220 will not disappoint you. Click on the button below for more information and its current price.