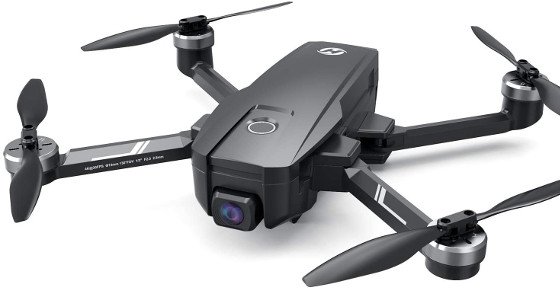 The Holy Stone HS720E 4K EIS is one of Holy Stone’s more expensive drones and it comes with some impressive features. These include features like GPS, optical flow sensor, automatic return home and intelligent flight modes. The drone also comes with an electronic image stabilisation feature, a Sony image sensor and records video footage in 4K. It has a flight time of 22 minutes and a transmission range of around 900 meters.

Hi and welcome to this review of the Holy Stone HS720E, a new budget drone that actually comes with a 4K camera.

The Holy Stone HS720E (also known as the EIS 4K drone) is an upgrade to the original HS720. That drone was also advertised as having a 4K camera, but it could only capture images in 4K and not video footage.

Holy Stone is one of the best brands for low-cost drones, despite some exaggerated claims, most of their drones do what they say and are fun to fly.

The HS720E 4K EIS drone is their most advanced drone if you are in the hunt for a cheap 4K camera drone, the HS720E may be what you are looking for.

First thing I want to mention is the design of the drone doesn’t deviate much from the original, it does look a bit slimmer but overall, its look exactly like its predecessor. 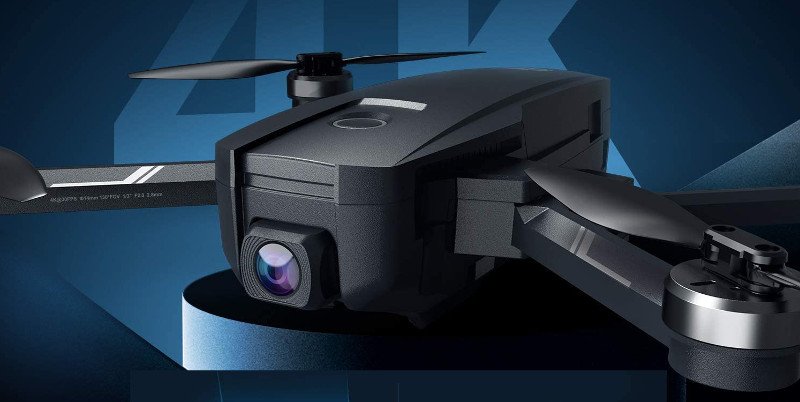 The Holy Stone HS720E is a very nice looking drone, it is made from high-quality plastic and has a premium feel to it. It very much looks like how a modern consumer drone should look, it has an elegant foldable structure and I like its all-black colour scheme as it makes it look more futuristic.

It’s not a very heavy drone but it does weigh just under 500g, which means you will need to register the drone if you live in the UK, Canada or the USA. It’s also not a very big drone, in its unfolded form it measures 13.3*9.5*2.3 inches and comes with a pretty cool carry case which also has a very premium feel to it.

As it is a foldable drone, the Holy Stone HS720E is a suitable drone to travel around with, its compact design makes it easy to carry around.

It is a GPS enabled drone, this provides it with a lot more features including the ability to track it accurately on the drone app which will minimise the risks of losing the drone and the GPS system also allows you to fly the drone autonomously through its smart (or intelligent) flight modes.

The drone also has an optical flow sensor on its belly that will allow you to operate it in areas where the GPS signal may not be very strong. So, you can fly this drone indoors, although, as it is a medium-sized drone, the area would have to be quite large and spacious for you to fly it properly. 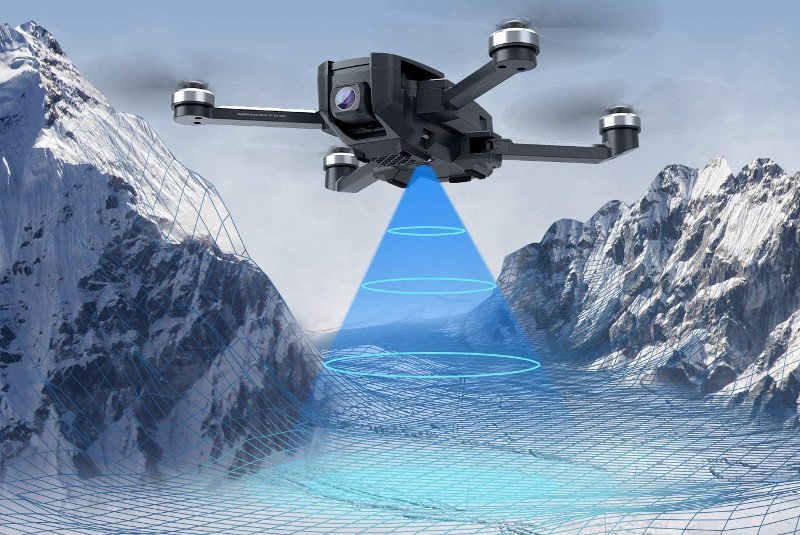 Like most Holy Stone drones, the hs720E has some cool LED lights underneath each rotor arm, these make for nice spectacle if you fly the drone at night. However, they also serve a couple of other purposes and that is to help you troubleshoot any problems that may occur and also indicate when the drone compass has been fully calibrated.

The drone is powered by a 7.4v 2800 mAh lithium polymer intelligent battery which provides it with a flight time of 23 minutes (officially), which is decent for a drone of its price range. As an added bonus you get an extra battery with the drone package which will extend your flight time without having to wait for the battery to fully recharge.

The drone also comes with brushless motors which are more powerful and efficient than brushed motors. Brushless motors allow the drone to fly more smoothly and provide the drone with more speed, they also last longer and require less maintenance. Although I would advise you to clean them on a regular basis to keep them in optimal conditions.

The controller remains the same, it’s powered by two AA batteries, these are not provided with the drone package, so you will need to purchase a few separately. It’s got buttons for automatic take-off/landing, photo and video buttons are on the top and there also a dial that will allow you to adjust the camera angle.

One of the best features of this controller is the LCD screen in the middle that displays telemetry details about the drone. To make use of the drones FPV feature, you will need to download the Ophelia app which is available for both iOS and Android devices. This a decent app, it has a nice user interface and is easy to navigate and use, however, please be aware to make use of the apps FPV feature, you will need to have a smartphone that has 5G WiFi technology, otherwise, you may not be able to record or stream live video footage.

Now, as many of you may be aware, the main reason I like drones is because of the cameras they come with. They allow you to view the world from above and see places you may not have otherwise seen.

The HS720E drone comes with a good camera, especially for its price, however, let me just say that it is not a camera that is suitable for professional drone photography.

The camera can record 4K video footage at 25fps and the quality is pretty good, although you may notice some distortion especially around the edges. It is a fixed camera, however, the angle can be adjusted 90° via the remote controller and although it has no gimbal, it does have an electronic image system that will reduce shakiness and jello effect.

The drone comes with a Sony image sensor, which is a first for a Holy Stone drone and shows how ambitious they are going forward. The camera can capture 4K images and they are of very high-quality.

There is a micro SD card slot near the camera, if you want to record video footage in 4K resolution, you will have to record it on a memory card. You can install a memory card of class 10 or above and with a maximum capacity of 128gb. If you don’t have a memory card, the footage will be recorded on your phone at 1080p HD resolution.

It’s a good camera but if you want a better option, check out the DJI Mavic Mini.

As I mentioned earlier, the drone comes with a few intelligent flight modes, these are fun to play around with and they will help you take better videos and photos.

The drone comes with the following intelligent flight modes:

Follow me – In this flight mode, the drone will lock onto your smartphone and follow you from behind.

Orbit mode – Lock the drone on a target and it will orbit that position automatically.

Waypoint (or trajectory) – This is probably one of the most enjoyable flight modes to play around with. You draw a flight path on the drone app and the drone fly’s along that route on autopilot and comes back home.

In addition to the above flight modes, the drone also comes with an automatic return to home feature. This feature is activated if you lose connection with the drone or if the drone gets low on battery charge. This is a useful feature that will minimise the risks of losing the drone in mid-flight.

As you would expect from a Holy Stone drone, the HS720E EIS 4K drone fly’s very well, it hovers pretty well and is relatively easy to operate. The drone comes with multiple speed modes, so you can test out your flying skills as you get more experienced and it can stream live video footage in HD. Use However, as I mentioned earlier, to use the FPV feature, you will need a smartphone that comes with 5G WiFi technology.

I am impressed by this drone especially the fact that it does actually record video footage in 4K. It comes with some cool features, it has a good flight time, GPS automatic return home and electronic image stabilisation feature. However, I personally prefer the DJI Mavic Mini, which is around the same price range but comes with superior flight time, a better quality camera and better overall flight performance.