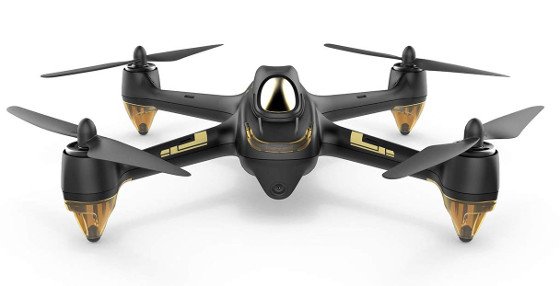 The Hubsan H501S is a fantastic drone that looks awesome and comes with some stunning features including an HD camera and a remote controller with an integrated 4.3 inch LCD screen. This means you will not have to use your smartphone to make use of its FPV features which is something I wish many other drones had. It comes with dual GPS modules for more precise positioning and a couple of autonomous flight modes. It has a flight time of around 20 minutes and despite being a few years old, it’s still one of the most popular drones on the market and a good choice for anyone looking for a budget-friendly HD camera drone.

Hubsan are one of my favourite drone brands, they have released some amazing drones over the past few years and one of their most popular is the Hubsan H501s. I have been meaning to review the Hubsan H501S for a long time now but with the constant release of new drones, I totally forgot about it.

When it comes to budget-friendly drones, Hubsan are one of the leaders, I have reviewed many of their drones on my blog, most of them are very popular, even the ones that were released years ago.

It’s been at least four years since the Hubsan H501S first came out, despite the many drones Hubsan have released since then, the H501S still remains a very popular drone and that is because it comes with advanced features that were not very common in drones back then.

So, if you are looking for an advanced drone that costs less than $300, keep reading this review of the Hubsan H501S because it may be of interest to you.

One of the first things that you will notice about the Hubsan H501S is that it looks and feels like a premium drone. It has a solid structure and is very well-designed, although it is not a foldable drone, I am impressed by its overall build. 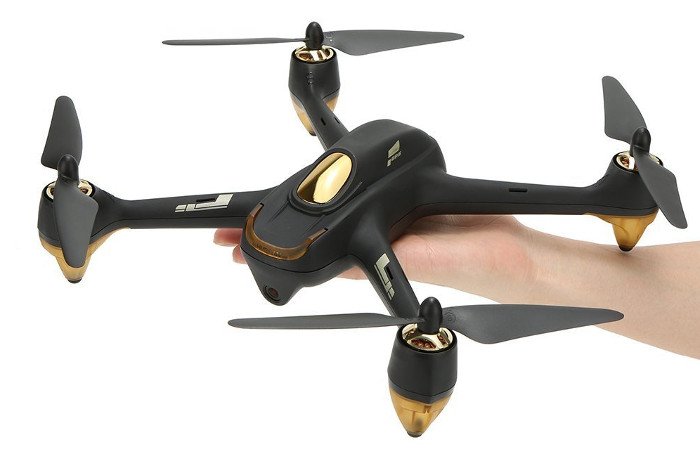 It’s not a drone that will easily breakdown if you do manage to crash it lightly, it is not a very heavy drone, weighing in at around 450g. So it will not be much of a burden if you want to travel around with it, although if you want a travel drone, I highly advise you to get a foldable drone, they are more compact and usually lighter.

One thing I must note before I carry on is that because it weighs more than 250g, this means that you will need to register this drone if you live in the UK, Canada or the USA. If you live anywhere else, please do check what the rules and regulations are in your area.

The Hubsan H501S was one of the first Hubsan drones to be fitted with brushless motors. Brushless motors are much more powerful, more efficient and last for longer. These motors give the drone a lot of thrust during take-off and also make them a lot faster than drones with brushed motors.

Underneath each rotor are some big LED lights that not only look cool when you fly the drone, but they also help to indicate when your drone compass is fully calibrated. If you an experienced drone pilot the LED lights will help you fly during the night, although I do advise you to not fly it too far out and keep well within your eyesight.

The rotor arms also have small rubber landing legs, a useful feature added to this drone to help protect the camera when you land.

It has a small micro SD card slot on the side where you can record your video and images, it supports 4G TF cards that have a memory capacity between 8-32 GB.

The drone is powered by a 7.4v 2700 mAh lipo battery, it’s a powerful battery that gives the drone flight time of around 20 minutes, this is an especially impressive flight time considering that the drone is a few years old and back then budget-friendly drones didn’t have 20 minutes of flight time.

The battery is placed in the back of the drone and unlike most new drone batteries, this one comes with an EC2 connector, so you will need to connect both cables before closing the battery compartment.

Another thing to note is that although 20 minutes is above the average for most consumer drones, I believe it’s not nearly enough time to fully enjoy flying this drone. This is why I always advise people to purchase extra batteries, it will extend your flying time and you will not have to wait around a couple of hours for the battery to get charged before you can fly again.

One last thing I want to mention before I get to the HD camera (which I believe is the best feature of this drone) is it’s awesome remote controller. 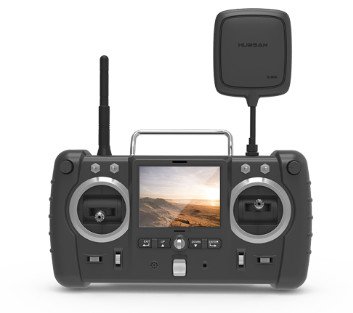 Now, this controller is big and its like a throwback to the old remote controllers of the ’90s. Many may not like its design, but it looks cool to me and despite being big, it is comfortable in your hands.

One of the things I like about this controller is the fact that it comes with an integrated 4.3-inch LCD screen. This means you will not have to use your smartphone or tablet to stream live video feed which is way more convenient. I wish there were more drone controllers that came with this feature.

The LCD screen is covered by a sunshade, you can take it off if there is no need for it, but if you are flying in sunny conditions, it will be hard to read the screen so the sunshade will come in handy.

All the controls are identified by their icons, so you will have no trouble working put what each one does, and the control sticks are easy to manoeuvre. The antennas on the top are actual real antennas a not fake ones like you see on cheap toy drones and the one that is used for FPV is for some reason shaped like a paddle!!

The transmission range is 400 meters in optimal conditions, which is pretty good and the controller is powered by 8 AA batteries which are not included with the package.

The camera is my favourite feature of any drone, they allow you to experience the world around you from the air which is always amazing.

Although the Hubsan H501S is a few years old, the camera that comes with it is still pretty good, even when you compare it to more recent drone cameras.

It’s an HD 1080p camera with a wide-angle lens that will let you capture really good aerial images and videos.

Although the camera does not have any kind of stabilisation feature such as a gimbal, the images and videos are clear with little distortion. You may see some jello effect in the videos but it’s not something that will spoil the overall quality and you will not be using it in a professional capacity so a little distortion here and there will not matter all that much.

I was especially impressed with the video streaming quality, there is a little lag but hardly any interference (as long as you fly on a clear day), although the streaming quality is not HD, I think its standard 480p. However, if you decide to record as well (which you should do) that version will be in high definition.

One other feature I want to mention regarding the camera is that you can connect a VR headset to the controller and get the live video feed into the headset for a more immersive flying experience. 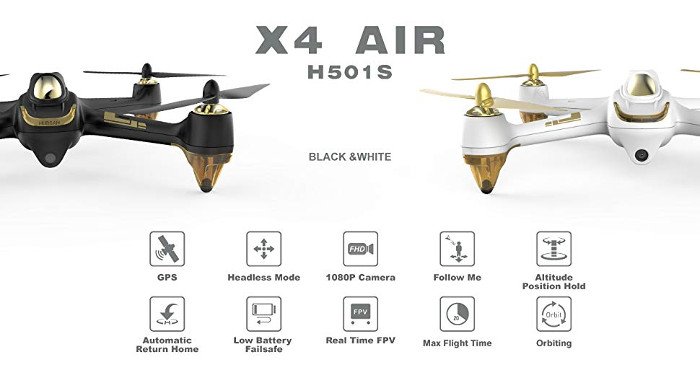 The HD camera is the main feature of this drone (in my opinion) but it comes with lots of other features that will enhance your overall flying experience and also help you have more fun with the drone.

Dual GPS – The drone can lock on to both GPS and GLONASS satellite systems for more accurate positioning and also allowing the drone to fly autonomously.

Altitude Hold – In areas where there is a weak GPS signal, this feature will allow the drone to maintain a steady altitude and still hover with little drift.

Orbit Mode – One of the smart flight modes that will allow you to lock the drone on a point of interest and it will orbit that position from a distance and height of your choosing.

Follow Me – Another intelligent flight mode, the drone will lock on to you and follow you, this is a cool way to video yourself when you go for a long walk or a bike ride. Do remember that all smart flight modes will need strong GPS signal to operate properly.

Automatic Return Home – This is a safety feature that will minimise the risks of losing the drone, you can activate it manually by pressing the return home button on the controller. The feature will also be activated automatically if you lose connection with the drone or when the battery gets too low.

Although a lot of new drones come with these features, the Hubsan H501S was really ahead of its time when it was released and the reason it still remains a very popular drone.

As you would expect of a drone from Hubsan, the drone performs very well, it flies steadily and all of its main features operate as they should. It’s relatively easy to handle and the live video streaming quality is surprising of very good quality, the flight time is around what is officially stated, you may get a few minutes less depending on the weather and how much power you consume through the use of the camera and the autonomous flight modes.

I really like this Hubsan H501S drone, it was one of the first budget-friendly drones that came with dual GPS and smart flight modes. It’s a good drone and not hard to handle, its suitable for everyone and a good choice for anyone looking for a drone with a high-quality camera and advanced features.