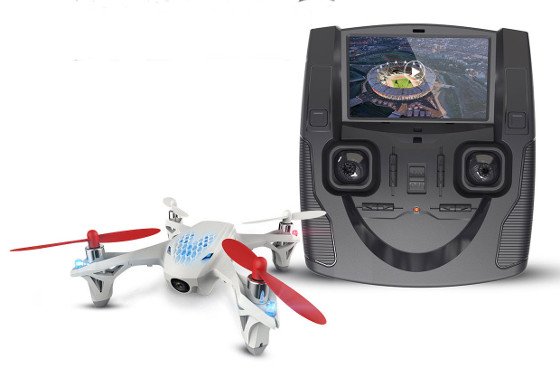 The Hubsan X4 H107D is a great drone for beginners,it remains one of the most popular toy drones on the market and this is because it has some good features like a decent HD camera and a 4.3-inch screen on the controller for fpv. It can do some flips with the push of a button and can stay in the air for 8 minutes. If you are in the market for a toy drone,the Hubsan X4 H107D will do just fine.

Today I will review the ever popular Hubsan X4 H107D,it’s a toy grade drone that has been popular with drone hobbyist since its release a few years back.

Hubsan have been making toy drones for a while now and the Hubsan X4 fpv is one of their best quadcopters currently in the market. If you’re looking for looking for a cheap drone with fpv capabilities then X4 H107D will no doubt do the job.

The Hubsan X4 H107D is a great drone for beginners and those-those looking to acquire their first drone but are on a limited budget. It’s a great drone considering it comes with a decent camera and fpv controller without having to pay a huge sum for it.

The drone is small, lightweight and easy to use, this quadcopter will give you a good first introduction into the fast moving world of drones. As with most cheap drones, they do take some practice to get used to but nothing that beginners cannot handle. This review will explore what this miniature drone has to offer and what its capabilities are. 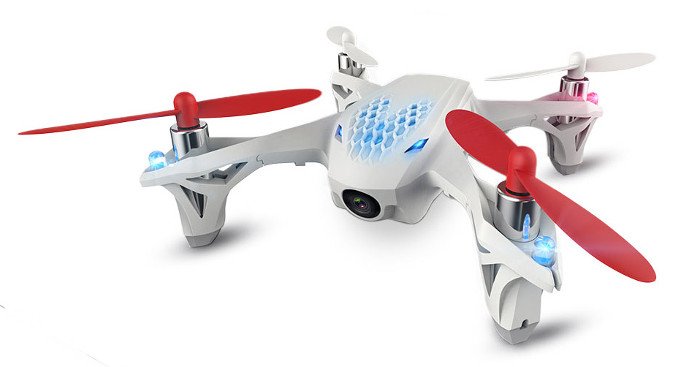 It comes almost ready to fly, it requires a few adjustments as is the case with all ARF drones. The protective ring that prevents the propellers from breaking up when it crashes, will need to be installed before you start flying. Other than that, there isn’t much else to put together and you are literally ready to fly this tiny but immensely fun drone.

Inside the box you will get the following items:

The drone features a full four-channel 2.4Ghz remote control, full-power coreless motors, and a high capacity lithium polymer battery with stunt mode and a 4.3 inch LCD screen. It comes equipped with a camera and is an FPV (First person view) drone, which means you get to see exactly what the drone camera see’s in real time.

A drone with FPV  feature is probably one of the main attractions of this drone, I mean nearly everyone wants to know what it feels like flying and other than parachuting or putting on a wingsuit and jumping off a mountain,  an fpv camera drone is probably the next best option.

The 2-megapixel camera isn’t anything to shout about, but considering the price and the fact you are not really looking for Hollywood style footage, it is good enough.

You can record video footage by installing a micro sd card in the controller but depending where you are flying there may be regular interferences in the video feed which also get recorded so keep that in mind.

Video is recorded in 720*240 pixels, which isn’t HD quality but still is decent enough to enjoy on your controller.

It should be noted that the video is recorded in AVI format, so to watch it on your tablet, PC or smartphone, you will have to use a video converter that makes it watchable on these platforms.

There are various video converters on the net, however, I do use this website whenever I want to convert one video format to another

The drone is very durable with a one-piece main frame that can take the occasional hits and bumps. Although it comes with a six-axis stabilising system, because of its lightweight it is advised not to fly outside in strong winds as you may lose control of it.

Those of you who may be more used to drones with GPS capability, may find controlling this drone quite difficult at first and making it hover will be hard. However, once you get the hang of it, the flying does get easier and enjoyabale. 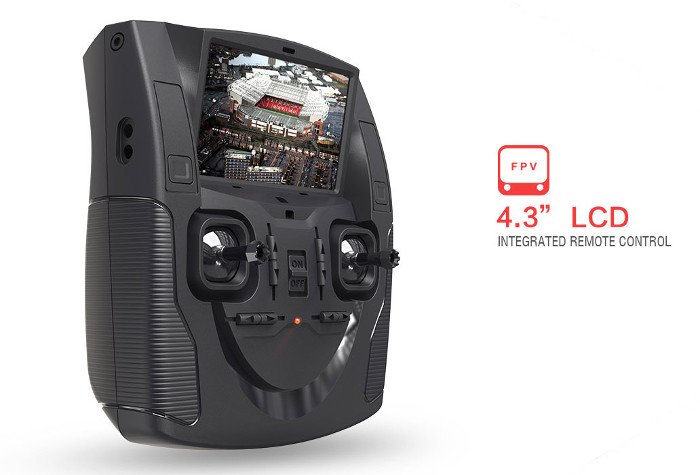 The controller has two modes, mode 2 is for beginners, the controls in this mode are not so sensitive so flying is made easier.

To do the cool flips and manoeuvres you will have to use the expert mode, this will let you configure the controls to your liking and flying is much more fun.

The controller has a range of around 100 meters which is in range with most drones in its class, however, should you use the fpv feature it will drain your batteries much faster.

Its 4.3-inch screen gives you decent footage but expect a lot of interference as this is still a toy grade quadcopter. You can also attach fpv goggles to the controller for a more immersive experience, if you do buy fpv goggles, do make sure they are compatible with the drone video signal.

This also makes the drone a decent choice for drone racing, you probably won’t win many races but if you are looking to race drones for the first time, Hubsan X4 H107D is a good choice.

The drone has a flight time of around 7-10 minutes, with a range of 100 meters or so. The battery takes around 30-45 minutes to charge, it is always a good idea to have spare batteries because 7-10 minutes definitely isn’t enough time to fly a drone.

Budget quadcopters like the Hubsan X4 H107D cannot hover because they do not have the necessary technology for this feature, so you should be extra careful when flying outdoors. Although should you damage the drone in any way there are spare parts available from many online retailers like dronesdirect, Amazon, and Buzzflyer.

This drone, which is perfect for beginners, is quite different than other low budget quadcopters one being it comes fully equipped with a camera. The camera feed can be live streamed the 4.3 inch LCD screen on the remote controller and you have the option to record the footage, although you will need a micro SD card for this.

In summary, this little quadcopter with its FPV and camera is a brilliant purchase for those beginning to fly drones. The camera feed can be streamed live to the controller and can also be recorded. You can also do some impressive manoeuvres with this drone once the controls have been mastered. It also comes at a very reasonable price for a drone with pretty some very good features. The battery gives you a flight time of around 7-10 minutes which is one of the downsides and if you use the fpv feature, the battery will be drained a lot faster. However, for a beginner or someone looking for some fun, this drone is perfect.