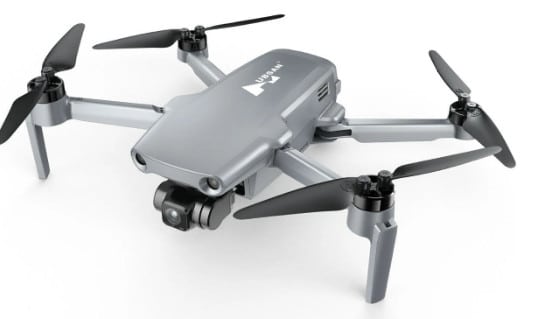 The Hubsan Zino Mini Pro is a lightweight drone that weighs less than 250 grams and comes with some amazing features. It has an HD camera capable of recording in 4k and capturing 48MP images. The drone also comes with a front and back obstacle avoidance system and has an official flight time of 40 minutes Other features include intelligent flight mode, optical flow sensor, dual GNSS receiver and cinematic flight mode.

Hi and welcome to this review of the new Hubsan Zino Mini Pro drone, is this a legitimate alternative to the DJI Mini 2 or the Mavic Mini? Find out in this detailed review.

Hubsan are a well-known drone brand and mainly sell low cost drones and they are very popular with beginner drone pilots. Their Zino range of drones are a little more expensive because they come with more advanced technological features such as dual GNSS receivers, 4K camera, autonomous flight modes and a longer flight time.

The Hubsan Zino Mini Pro is their latest drone and from the initial reviews, it looks like Hubsan have another winner.

As you shall see from its design and features, the Hubsan Zino Mini Pro is a direct competitor to the DJI Mini series of drones, specifically the newer Mini 2 and in many ways, the Zino Mini actually comes out on top when you compare some of their features.

So, does the Zino Mini Pro live up to its hype and can it challenge DJI in the Mini drone market? Read the full review and find out.

So, one of the first things you will notice with regards to its design is that the Zino Mini Pro looks a lot like the Mavic Mini drones. However, I personally prefer the metallic grey colour scheme of the Zino Mini Pro, it really gives it a premium look, which is what Hubsan are going for with their Zino drones.

This is a very compact drone and as the name says, it is small and can fit in the palm of your hands when it is in its folded form. It weighs less than 250g, which means that if you live in the USA and will only be using this drone for recreational purposes, you will not need to register it. As for the UK, there was a similar law but that has recently changed, you will now need to register a drone if it has a camera, even though it may weigh less than 250g.

The Zino Mini Pro is a good looking drone and despite weighing under 250g, it comes with many impressive features.

One feature that really stands out, especially against its competition, is the front and back obstacle avoidance sensors.

No other mini drones have this technology, and this includes drones from DJI and Fimi, many people will simply purchase this drone for this feature alone.

The sensors have around a 10 meters detection range and the drone will stop when it detects an obstacle within this range.

However, it must be noted, the obstacle avoidance isn’t as intelligent as the ones found in the likes of the DJI and Autel Evo drones.

What this means is that unlike in the obstacle avoidance systems in more advanced drones like the DJI Air 2S or the Autel Evo Pro 2, where the drone will avoid the obstacle and continue on its course, the Hubsan Zino Mini Pro will just stop, and the pilot will have to manually fly it around the obstacle or bring it back home.

The drone has a couple of infrared sensors and an optical flow sensor on its belly, these help with flight stabilisation when the GPS signal is weak.

There is also a searchlight on its belly that is useful for night time flying and may also be useful for search and rescue missions.

Something that may disappoint some people is that the Zino Mini Pro does not have a micro SD card slot. However, it does come with a decent internal storage capacity of 64GB and they are also planning on releasing a version with 128GB storage.

The drone is powered by a 3000 mAh lithium battery that provides it with an official flight time of 40 minutes. However, don’t expect to fly for 40 minutes in the real world, drone companies are known to exaggerate the flight performance of their drones.

Hubsan probably did manage to get 40 minutes of hover time under perfect laboratory conditions, but tests from customers have shown that flight time is in the range of 30-35 minutes.

This is still very good, especially for a mini drone and puts it on par with the likes of the DJI Mini 2 and Fimi X8 Mini drone.

The controller has a nice LCD screen that displays telemetry data about the drone and it is powered by an internal battery.

To use the drone’s FPV feature and intelligent flight modes, you will need to download the X-Hubsan 2.0 app. This app is compatible with devices running on iOS 10.0 or higher and Android 6.0 or higher.

Using enhanced Wi-fi technology, the drone can be controlled from a maximum range of 10km, although, this is only possible in perfect conditions and in most countries, the law requires you to keep the drone in your line of sight.

The drone can capture images in 48MP and although the specs say that it only captures in JPEG, in the app, there is an option for people to capture in RAW images as well. However, there have been reported issues with RAW image files not being readable with post-processing software, although recent firmware updates have tried to resolve this, issues still remain.

The camera is stabilised by a 3-axis gimbal which helps in reducing distortion like shakiness and motion blur.

The live video feed is transmitted in HD at 20fps, and it uses Hubsans Syncleas 3.0 enhanced WiFi technology to minimise lag.

The drone comes with 3 speed modes, one is called the movie mode, which is the slowest mode and allows you to shoot cinematic video footage.

The others are normal mode and sports mode, these will allow you to fly at speeds of 36 km/h and 56 km/h respectively.

It should be noted that the obstacle avoidance system is turned off by default and is not supported when the drone is in sports mode.

The Hubsan Zino comes with a few intelligent flight modes, and this includes the new and improved active track mode.

With the GPS follow, the drone will follow you from behind or parallel to your position. There is also an orbit or point of interest mode, in this mode, you can set the transmitter or the drone’s position as the point of interest, and it will automatically circle that area.

Another intelligent flight mode is the waypoint mode, this allows you to draw a flight path on the app and the drone will automatically fly along that route.

There is a feature that will allow you to capture short creative videos from different angles completely hands-free.

If you are familiar with the DJI Mavic Mini’s Quickshot feature, this is very similar, there are 4 different creative videos you can record, they are Rocket, Dronie, 360° and Comet.

The drone also comes with an automatic return to home feature, this is activated whenever the drone battery is low on charge, or you lose connection.

As for the drone’s flight performance, when it was initially released, there were a lot of complaints with regards to stabilisation, video quality and obstacle avoidance, however, they have since fixed a lot of these issues and, although, there are still minor problems, on the whole, the Hubsan Zino Mini works as advertised.

Obviously, the Zino Mini Pro is an alternative to the popular DJI Mini 2, it comes with a lot of similar features, but the Hubsan Zino Mini Pro does come with a few features that are found in the DJI Mini 2.

The main ones being the obstacle avoidance system and the intelligent flight modes, the camera specs for the Zino Mini Pro are also a little better, coming with a larger lens and able to capture images in 48MP. However, the output from the DJI Mini 2 look much better and more stable.

It also has a longer flight time, but it does cost more than the DJI Mini 2, for a more in-depth comparison, read my Hubsan Zino Mini Pro vs DJI Mini 2 article.

The Zino Mini Pro is a good mid-tier drone that is easy to fly and suitable for both beginners and people who want a good drone for photography but do not want to spend $1000+ for one. If you want some alternatives, check out this article for the best drones under 250 grams.