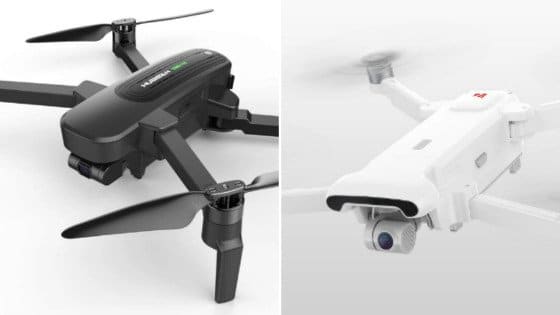 Hi, in this article I will compare two popular mid-range drones and see which one comes out on top in the Hubsan Zino Pro vs Fimi X8 SE drone battle.

These mid-range drones are great for professional photography and they cost less than $500, which is a very reasonable price when compared to the more expensive drones from DJI and Autel Robotics.

Both the Hubsan Zino Pro and Fimi X8 SE have been on the market a few years now, there were released around the same time and are very good alternatives to drones from DJI and Autel.

So, which is the better drone? I personally feel they are very similar when it comes to the main features. However, as you shall see from the comparison below, the Fimi X8 SE has the edge in a few areas.

The main feature of these drones is their camera, both the Hubsan Zino Pro and Fimi X8 SE come with real 4K cameras that are suitable for professional use.

The Hubsan Zino Pro uses an Ambarella A12S image chip that enables the camera to record video footage in UHD 4K at 30fps. It has a 1/3 Sony image sensor that can capture 13 MP images and the camera is stabilised by a 3-axis gimbal that will eliminate any distortion from your videos and images. The camera is also compatible with ND filters that will come in handy for professional photographers. However, you can only capture images in JPEG, so you don’t have much control when it comes to image enhancement as you would do with an image captured in RAW format.

The Fimi X8 SE has a superior camera, it has a larger lens which allows for more light to enter and capturing more image details resulting in overall better quality videos and photos. The camera is supported by an advanced 3-axis mechanical gimbal for image and video stabilisation and it comes with HDR support which will enhance the overall colour quality of your videos and photos. The camera can shoot in both JPEG and RAW format so you will have more control over image quality in post-production. You can shoot amazing panoramic videos and photos and record hyperlapse videos. The camera can record 4k videos at 30fps and 2.7k videos at 60fps and has a recording speed of 100Mbps.

Also, as many of you will most likely use these drones for professional photography services you will need to get a proper drone license as well.

Both drones are well built, they are medium-sized drones and as they both weigh over 250g, you will need the drones if you live in the UK, Canada or the USA. They are foldable drones, which are my favourite type of drones are this makes them very compact and easy to carry around. So, if you are looking to travel a lot and want a drone for professional photography, these drones are perfect to travel with.

In terms of aesthetics, the Hubsan Zino Pro has my vote, this is a well-designed drone and I like its all-black colour scheme along with the green logo on the top. It comes with brushless motors which allow it to fly smoothly and has a top speed of 37 mph. It has some cool LED lights underneath each rotor arm which makes it suitable for night-time flying. The drone is powered by a 3s lithium polymer battery that provides an overall flight time of around 23 minutes. The controller for the Hubsan Zino Pro is probably one of the best-looking controllers I have come across, it has a minimalist design, there are not a huge number of buttons and it is powered by an internal lithium polymer battery. It has a range of around 4km in perfect conditions and has a smartphone holder that pulls out from the bottom.

The Fimi X8 SE is another beautifully designed drone, it has a streamlined aerodynamic design and looks much flatter than the Hubsan Zino Pro, which some people may prefer. It weighs around 760g, which is a little heavier and it is powered by an 11.4v 4500 mAh intelligent battery that provides it with 35 minutes of flight time which is on par with the more expensive Autel Evo and DJI Mavic 2 Pro. It has an optical flow and ultra-sonic sensor on its belly for better flight stability and comes with a dual GPS system. The remote controller has a unique design in that the smartphone is inserted into the middle, it has buttons for take-off and automatic landing and has a couple of dials on the top that will control the gimbal angle and exposure value and ISO of the camera. Although I do prefer the look of the Hubsan controller, this is a nice controller and comfortable to hold.

Both drones fly very well, they are easy to operate and with both coming with dual GPS systems, you can track their position on your smartphone and reduce the risks of losing your drone.

Both drones include the following intelligent flight modes:

Image tracking – You can lock the drone onto any moving subject and the drone will follow from behind. The Fimi X8 SE can also follow from a parallel perspective and track any movement from a stationary position.

Orbit mode – You can lock the drone onto a point of interest, and it will orbit that position automatically.

Flight plan – In this mode, you can draw a flight path on the drone app and the drone will fly along the route and come back home.

Both drones come with an automatic return to home feature, this is activated whenever the drone gets low on battery or when it loses connection with the controller.

The Fimi X8 SE also has a feature called Cineshots, you can choose from 4 pre-programmed flight modes that will take quick videos and photos from different flying angles.

The control range for the Zino Pro is 4km while the Fimi X8 SE comes with a control range of 8km and both drones transmit real-time video feed at 720p HD resolution.

The Fimi X8 SE has an optical flow and ultra-sonic sensor on the bottom, which will allow you to fly the drone in areas with a weak GPS signal. However, the Zino Pro does not come with any kind of sensors, so this is another area where the Fimi X8 SE comes out on top.

Both the Hubsan Zino Pro and Fimi X8 SE are exceptional 4K drones that can be used for professional drone photography. The Fimi X8 SE has a slight edge in its camera quality, flight time, control range and a few other features. They both cost less than $500 and are a good alternative to the more expensive drones like the Mavic Pro and Autel Evo. If you want more options for drones under $500, click on the button below.