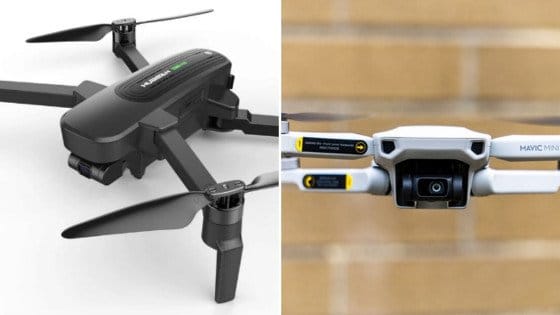 So, which drone is better in the battle between the Hubsan Zino Pro vs Mavic Mini? Well, as you shall see from this article, there is no clear winner, both are fantastic drones that come with some amazing features and are suitable for professional drone photography.

The DJI Mavic Mini is the more recent drone put of the two, it is DJI’s first and only drone that costs less than $500 (if you ignore the Tello drone which was jointly made with RyzeTech). The drone is incredibly light and this is one of its main selling points.

The Hubsan Zino Pro has been out a bit longer, it’s a legitimate alternative to the more expensive 4K camera drones on the market and is one of the best drones in its price range.

I always like to start these comparisons with what believe is the main feature of any drone and that is the camera.

The DJI Mavic Mini comes with a good camera, it has a 1/2.3” CMOS sensor that is capable of capturing images in 12MP. However, it only captures images in JPEG, so you will not have much control over image enhancement in post-production. The camera has an 83° FOV and it can be remotely adjusted to get better viewing angles. It can record video footage in 2.7k at 30fps or 1080p at 30fps at a speed of 40Mbps. Despite being a small lightweight drone, DJI have managed to install an advanced 3-axis gimbal for image and video stabilisation. The DJI Mavic Mini has a micro SD card slot that can take memory cards of UHS-1 speed class 3 or above and has a maximum capacity of 256GB.

The Hubsan Zino Pro comes with a superior camera, which is kind of weird to say when you are comparing it against a DJI drone. However, this is a much better camera, it comes with an Ambarella A12S image chip which allows the camera to record in 4K at 30fps at a speed of 60Mbps and has some HDR support. It comes with image sensor from Sony that has a smaller lens than the Mavic Mini but still captures images in 13MP and like the Mavic Mini, it can only shoot in JPEG. It comes with a 3-axis gimbal for image and video stabilisation, the Ambarella A12S chip also provides additional electronic stabilisation. The Zino Pro has a micro SD card slot that takes memory card of class 10 or above with a maximum capacity of 128GB.

Both cameras stream video footage in 720p and have a transmission range of around 4km.

I like the look and design of both drones, they are both foldable and very compact, so if you are looking for a suitable drone to travel with, these are great for this purpose.

The DJI Mavic Mini lives up to its name, this is probably the most advanced mini drone on the market. When it is folded up, it can fit on the palm of your hands and its total weight is just 249g, this makes it even more incredible with the number of features that DJI have managed to install in this tiny drone. Its weight also means that if you are just planning on flying for fun then you do not need to register the drone if you live in the UK, Canada or the USA. It comes with brushless motors, has a dual GPS system and has an optical flow and infrared sensor on its belly. The last two features will help the drone hover more accurately and will allow you to fly the drone in areas with a weak GPS signal. The Mavic Mini is powered by an advanced lithium polymer battery that provides it with a flight time of around 30 minutes, which makes it one of the best drones with the longest flight times.

The remote controller for the Mavic Mini is actually larger than the drone itself, it has a simple design, which I like and is powered by an internal lithium polymer battery. It has a range of around 4km and uses enhanced WiFi technology for video transmission.

The Hubsan Zino Pro is a lot bigger, as it weighs around 750g, you will need to register the drone, even if you want to fly it just for fun. It is a very nice looking drone with its all-black colour scheme and green logo on the top. The drone has a dual GPS system but unlike the Mavic Mini, it does not have an optical flow sensor, so you will not be able to fly this drone in areas with a weak GPS signal. However, as it is a medium-sized drone and weighs over 700g, you can fly it in mildly windy conditions without struggling to control it. The drone uses an 11.4v 3000 mAh intelligent battery which gives it a flight time of around 23 minutes, which is much less than that of the DJI Mavic Mini.

The Hubsan Zino also comes with a nice looking controller, it has a similar design to that of the Mavic Mini controller. It has a smartphone holder that pulls out from the middle and is powered by an internal battery. It uses Hubsans LEAS transmission technology which allows it to control the drone from a maximum distance of 4km.

Both these drones are easy to operate and because of the flight technology they come with, both these drones fly very well. They both have multiple speed settings that will allow you to test your flying skills and both come with dual GPS systems so you can track them more accurately.

The Mavic Mini also comes with a superior app, the DJI Fly app was specifically developed for the Mini and it comes with a lot of features that include allowing you to edit your videos and images and sharing them on social media.

The Hubsan Zino Pro comes with similar features, you also shoot shot cinematic videos and take amazing Panoramic photography (you can also do this with the Mavic Mini). The drone also comes with 3 intelligent flight modes that include the drone automatically following you from behind, flying along a pre-drawn flight path or orbiting a point of interest.

I personally like both these drones, however, if I had to choose one it would be the DJI Mavic Mini, mainly because it’s from DJI and they are my favourite drone brand. It’s very lightweight and is terrific for travel photographers, however, the Hubsan Zino Pro does come with the superior camera and intelligent flight modes, so if you had to choose one based on its camera quality, it would be the Zino Pro. However, if you would like more options for drones at a similar price point, click on the button below for the best drones under $500.