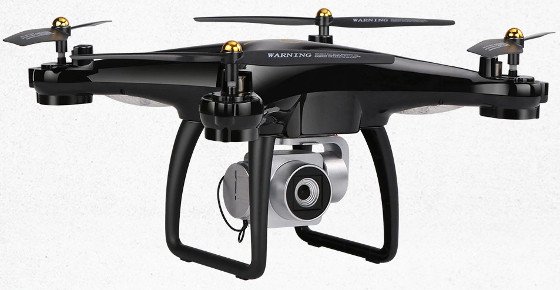 The JJRC H68G a beginner-friendly drone that comes with an HD camera and a few smart flight modes. Its super lightweight and not very big, which makes it easier to travel with. It has a flight time of around 10-15 minutes and has a GPS module that will provide a more stable flying experience. The official drone app has some issues which I explain in the full review and why I recommend a better alternative. Although for under $100, it’s still a decent drone.

JJRC are a well-known company for making high-quality radio-controlled toys this includes budget-friendly drones, many of which I have reviewed on this blog. In this post, I will review the JJRC H68G, which is one of their HD camera drones that cost less than $100

One of the many benefits of the growing demand for consumer drones is that you are spoiled for choice because there are a lot of high-quality drones at low prices from different drone companies.

JJRC is one of these companies that have started to focus more consumer drone and have released some fantastic drones like the JJRC X12 and X11.

The drone comes in two colours, all back or all white, I personally prefer the black version as it has a stealthy look about it. Although it doesn’t really matter what colour you get since they both have the same features.

The JJRC H68G is not a foldable drone, which is a shame because they are my favourite types of drones. Foldable drones are so much easier to carry around and travel with since most of them are very compact and lightweight.

Despite not being a foldable drone, I do like its overall look, it looks similar in design to the DJI Phantom range of drones, which are still very popular. The JJRC H68G is not as big or as advanced as any of the Phantom drones but it does not need to be because it is targeted for beginners and if you are a beginner, purchasing an advanced drone is not necessary.

Having said that, as you shall see later on in this review, the JJRC H68G does come with some advanced features that will make it more enjoyable to fly.

When you first hold the drone you will notice how lightweight it is, it weighs around 200g, so even though it is not a compact drone, its weight will not be much of an issue if you decide to travel around with it.

Its weight is also significant because it weighs less than 250g and this means if you reside in countries like the USA, Canada or the UK, you will not need to register the drone to fly it.

Most other countries do not have a weight limit as far as I am aware but please do check out the rules and regulations where you live just to be safe.

Just like the Phantom drones, the H68G comes with a pair of landing legs that will protect the camera when you land the drone. The camera is a 1080p HD and is an improvement over the 720p camera the H68 came with. The JJRC H68G is an upgraded version of the H68 and the upgrades are the camera and GPS.

Like most cheap drones, the H68G comes with brushed motors which are not as efficient or powerful as brushless motors but as you will see from the video further below, its overall flight performance is good. Brushed motors will require more maintenance, so please do remember that if you eve purchase a drone with brushed motors such as the JJRC H68G.

The drone comes with LED lights underneath each rotor arm, these are nice and big lights which makes the drone suitable for night time flying. Most drones come with LED lights now and this for a couple of reasons, they look fantastic and the lights also indicate when the drone compass is fully calibrated. 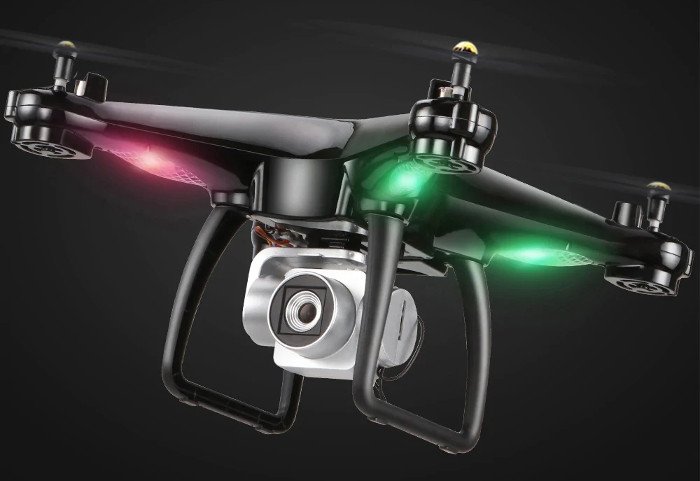 The drone is powered by a 7.4v 850 mAh lipo battery which gives it a flight time of around 10-15 minutes. The official time is 15 minutes but usually, it’s slightly less and so purchasing a couple of extra batteries is always recommended.

The drone remote controller is pretty cool, its well-designed with curved edges and is comfortable to hold. The controls are easily identified and there is a separate smartphone holder that you can attach to the back of the controller. The official stated transmission distance is 300 meters but if you are going to be using the FPV features (which you most likely well) the transmission range will be shorter.

It’s powered by 4 AA batteries which are not included with the package.

You can also control the drone via its app which is called the JJRC TST app and is compatible with both Android and iOS devices. However, I have to add that the reviews for the app are not so good, it is updated on a regular basis but it does seem to crash a lot, which is unfortunate because everything else about the drone is good. 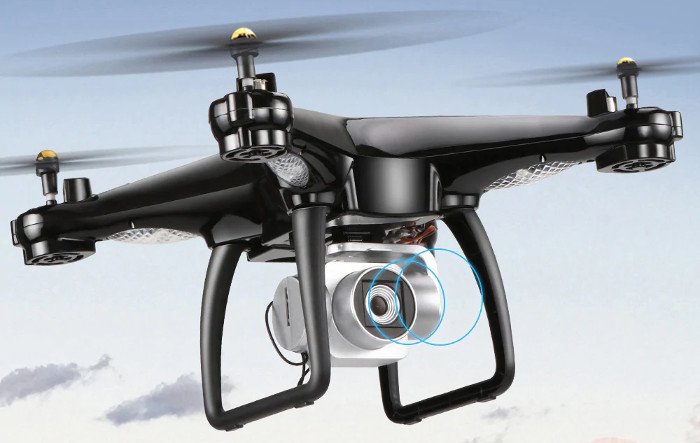 Now, one of the reasons I love drones so much is because of the cameras they come with. To see the world from above and see it from a perspective you may not have otherwise is an exhilarating experience.

The JJRC H68G camera is not a professional camera, so don’t expect to win any kind of awards for the videos and images it takes. However, it is still an HD camera that is capable of taking cool aerial videos and images.

The camera lens has a wide-angle so you can capture greater details and it can be remotely tilted 90° to get better viewing angles.

Being A drone that costs less than $100, the camera does not come with any kind of image stabilisation feature like a gimbal, but its overall quality is decent it has a micro SD card slot where you can record 1080p quality videos.

The one thing they can improve is the app which you need to use the drones FPV feature and its smart flight modes. When it works, the streaming quality is good, but it sometimes crashes, and your video feed is cut-off. I hope they update it on a more regular basis.

Despite being a very cheap drone, it does come with a couple smart flight modes that will help you fly the drone more easily and this will allow you to take better images and videos.

WayPoint – In this mode, you can draw a flight path on the app and the drone will fly along the path it automatically.

Follow Me – As the name suggests, the drone will lock onto you and follow you wherever you go.

Orbit Mode – The drone will circle around you from a height and distance that you can set within the app.

Automatic Return Home – This feature can be manually activated via the remote controller or the app. It will also be automatically activated if you lose connection

Like I stated earlier, these flight modes only work if the app is functioning properly and from what I have seen, the app does not always work as it should which is very unfortunate because everything else about the drone is good.

This is a good drone, its lightweight and looks great, its suitable for beginners and is easy to fly. It doesn’t have a great flight time but then again, it is an inexpensive drone, if you do decide to purchase the drone, buy a couple of extra batteries to extend the flight times. However, if you want a better drone that costs less than $100, I highly recommend the DJI Tello drone, it comes with a better camera, a superior app and has some cool flight modes that make it really fun to fly, check it out here. Or click on the button below for more information on the JJRC H68G and its current price.