The JJRC H71 is a small foldable drone that comes with an HD camera and has FPV capability. It’s a lightweight drone that is well-designed (looks like the DJI Mavic Air) and fly’s surprising well. The camera quality is decent, and it has a flight time of around 10 minutes. I would have given it a higher rating, but the drone app is somewhat unreliable.

Hi there and welcome to my review of the JJRC H71 drone.

You know as a drone enthusiast, one of the best things about the continued demand for consumer drones is that you are spoiled for choice when it comes to cheap beginner-friendly drones. I have reviewed a lot of quality drones that cost less than $100 and come with high-quality features and you can add the JJRC H71 to that list.

If you are new to drones and are looking for a cheap drone with a decent camera and some useful features, the JJRC H71 may be the drone for you.

One of the best things about this drone is that it comes in a really nice black carry case. The case is zipped and has a nice JJRC logo on the bottom, a very useful accessory if you travel a lot.

The JJRC H71 can be classed as pocket drone because it is so flat and small that it can fit into a medium-sized trouser pocket. It’s the perfect kind of drone to travel around with, its super lightweight so it will be easy to carry around plus it’s a foldable drone which makes really compact. 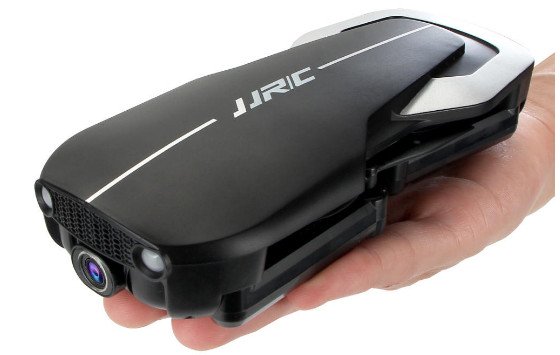 The drone measures just 22*23.5*3.5 cm when the arms are folded out and I am impressed with the overall design of the drone. It looks modern with its slim body and has some cool LED lights at the front and back which come in useful if you want to fly the drone in twilight hours.

The HD camera is fixed on the nose of the drone and has a wide-angle lens and it can also be manually tilted 90° to get a better viewing angles.

It comes with small brushed motors which are places inside of the rotor arms and small propeller blades.

On the bottom there is an optical flow sensor, this will provide the drone with better flight stability especially when it hovers. This is a nice addition since it’s a cheap drone and does not come with GPS. 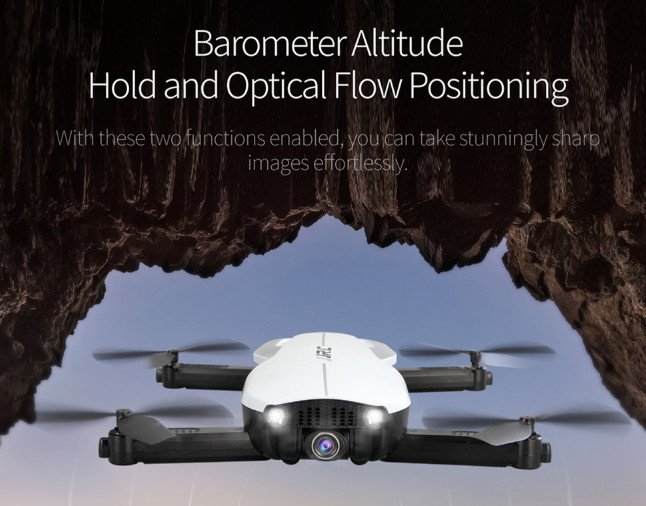 The drone is powered by 3.7v 1000 mAh lipo battery, this is a slim modular battery that is placed on the belly of the drone. The battery provides a flight time of around 10 minutes, which is on par with most other drones that cost less than $100.

It does take a couple of hours to fully re-charge, so if you want to extend the flight time without having to wait for the battery to charge, its best to purchase a couple of extra batteries, which is what I always advise people, regardless of what kind of drone they purchase.

Fortunately, you do get the option to buy the drone with two or three extra batteries which is the best option instead of having to purchase some later-on, which will cost you extra.

The drones remote controller looks like a video games controller, it’s not as aesthetically pleasing as some of the other drone controllers but its also not as ugly as some I have come across. 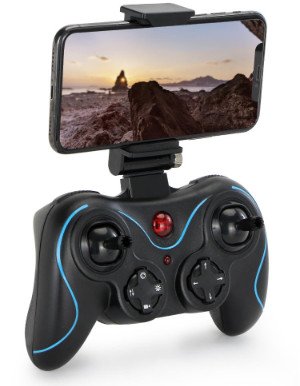 The controls are easily identified and there is a separate smartphone holder that you can attach to the back. It takes 4 AA batteries which are not included, so if you do decide to purchase this drone, remember to buy some batteries for the controller.

To make use of the FPV feature of this drone, you will need to download the official JJRC TST app which is available of both Google Play and Apple App store.

Now, I have to warn you about this app, its one of the strikes against the drone because it is buggy and seems to crash a lot and hence why it has a poor rating. Now, saying that, when it does work, the quality of the FPV feed is decent although there is some noticeable lag. If they do manage to sort out the issues with the app, I would have given this drone a much higher rating.

It’s amazing how far drone technology has come in a few short years, a few years ago, there were hardly any cheap drones with HD cameras and now we are spoiled for choice.

The JJRC H71 does not the most amazing drone camera and I have seen better cameras on similar priced drones. However, it’s still a decent camera and the overall quality of the videos and image is good, especially when you consider how cheap the drone is.

This isn’t a camera that will take breathtaking images and videos and it never was meant to, but if you find yourself in a party or are on holiday, you can take it out and take some impressive selfies with it and impress your family and friends. 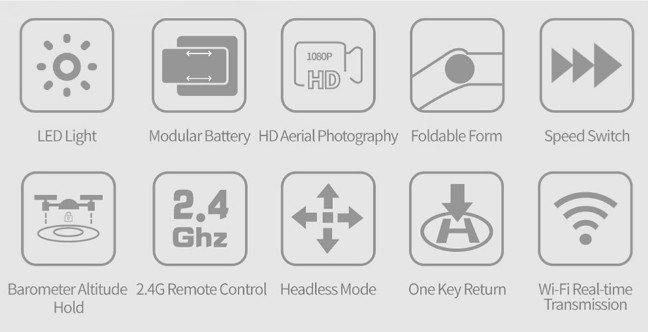 Despite being a very cheap drone, it does come with some cool features like the following;

Altitude Hold – With its internal barometer and optical flow sensor, the drone maintains a very stable altitude during flight and can hover with minimum drift.

Headless Mode – Great for beginners as controlling the drone is straight forward and you will not need to know where the head or tail is.

One-Key-Return – A useful feature that will minimise the risks of losing the drone.

I was impressed by the drones overall flight performance especially how it maintains a steady altitude and manages to hover accurately. The transmission distance is only around 80-100 meters in good weather. If you use the FPV feature, it’s around 50 meters, but this is only if the app is working properly. I would never advise anyone to fly a lightweight drone like this even in slightly windy conditions, especially if you are a beginner.

If you are looking for a cheap beginner-friendly drone, the JJRC H71 is a good choice. It comes with a decent camera and is easy to operate. The only issue is the unreliable app which I hope they improve, otherwise, it is a good drone for less than $100. Click on the button below for more information and its current price. However, if you do want a better option, check out the DJI Tello drone, which is priced similarly but comes with better features and a superior app.