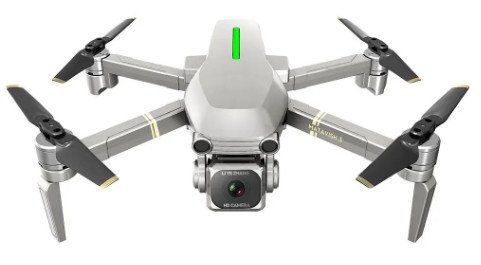 The L109 drone is a decent low-cost HD camera drone that comes with some cool features. It’s a drone is suitable for most people and is easy t fly. It has a 1080p camera with a wide-angle lens and comes with FPV capability. The claims about the camera are exaggerated but it is still a decent overall drone that comes with a flight time of 20-23 minutes and costs less than $200.

Hi and welcome to my review of the L109 drone which is also known as the Matavish 3.

I was excited about reviewing the L109 drone when I saw its design and read about its features. However, as you shall find out, you shouldn’t believe everything you read on a drone’s sales page, especially ones that are not very well-known.

I love drones and hence why I write about them, with the rise in their popularity, there have been a plethora of consumer drones being released into the market. While DJI remains king when it comes to high-end drones and may even have the best drone in the lower-end market with its release of the DJI Mavic Mini, there are a lot of very good low-cost consumer drones that come with really good cameras and advanced features.

However, there are a few that mislead consumers with their sales page like the L109 drone. On the whole, this is a decent drone that costs less than $200 but it has its issues especially the camera (which is the main selling point of the drone) as you shall see from this review.

One of the first things that drew me to this drone was its design, like a lot of drones that are released now, it is a foldable drone that looks similar to that of the DJI Mavic series of drones. 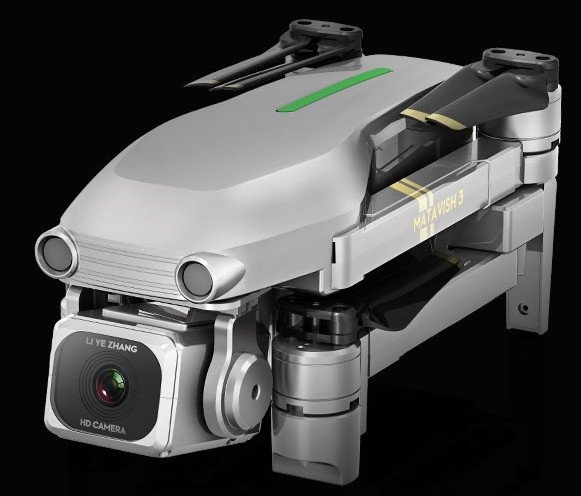 Foldable drones are my favourite type, they are usually lightweight and very compact making them easy to carry around and the perfect travel companion to record your journey.

The L109 drone measures 24.5*23.5*7.5 cm when it is fully expanded so it’s not a very big drone and is lightweight, weighing around 320g. This number is significant if you live in the USA, Canada or the UK, because the drone laws in those countries state that you need to register any drone that weighs over 250g. For most other countries, there is no specific weight limit to fly drones for recreational purposes, however, please still check your local rules and regulations just to be safe.

One of the cools things about this drone is that it comes with a nice grey carry case, so if you are planning in travelling around with it, you don’t have to worry about finding some extra space in your luggage for the drone.

The L109 comes with powerful brushless motors, these are better than brushed motors as they are more efficient and last longer. Plus they do not require as much maintenance and they provide the drone with more speed, in this case, the L109 drone has a maximum speed of around 40 km/h, which is very fast for a non-racing drone.

The drone is equipped with dual GPS modules for precise flight positioning on the app and also allows for the smart flight modes the drone comes with ( although they don’t always work as they should). There is also an optical flow sensor on the belly of the drone that will allow you to fly the drone in areas where there is a low GPS signal.

The drone is powered by an 11.1v 1600 mAh lipo battery, this is one those modern modular batteries that provide a longer flight time, for the L109 drone this means a flight time of around 20-23 minutes which is very good for a relatively inexpensive drone. Although this is a pretty good flight time, I would highly recommend that you purchase some extra batteries to extend your flight time. It takes a few hours to fully recharge a battery and you don’t want to wait that long to fly the drone again. Fortunately, you do get the option to purchase a couple of extra batteries along with the drone which I highly recommend you do. 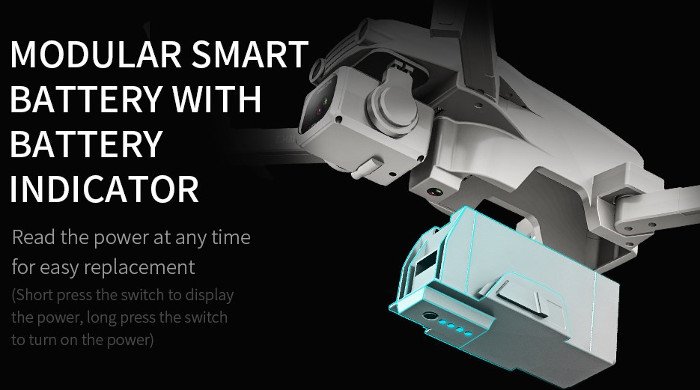 One of the best features of this drone is its remote controller which I am a huge fan of, there are a lot of controllers that look ugly but not the L109 controller which is aesthetically pleasing and very lightweight. It has a similar colour scheme to the drone and has an OLED screen in the middle that will display telemetry data about the drone. There is a smartphone holder that pulls out from the bottom and the buttons are easily identified. There are a pair of fake antennas which seem to be the norm for low-cost drones, I personally think, it would look much better without them. You should be aware that the controller takes 3 AA batteries which are not included with the drone. 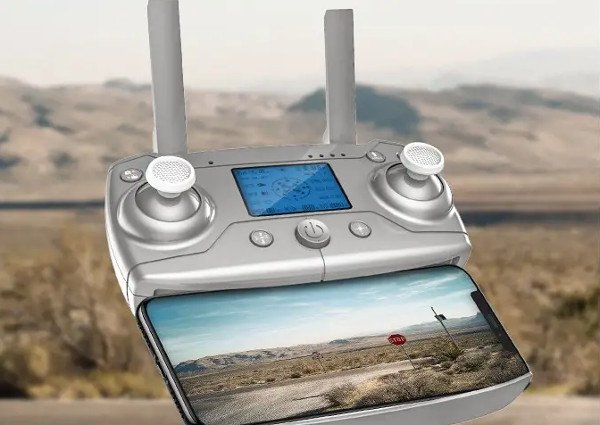 To make use of the FPV feature and smart flight modes, you will need to download the official app which is called LYZ RC GPS and is available on both Google Play and the Apple App Store. It’s a nice looking app with a friendly user interface and you can work out most of the functions of the app by yourself, although there is a very helpful handbook just for the app. 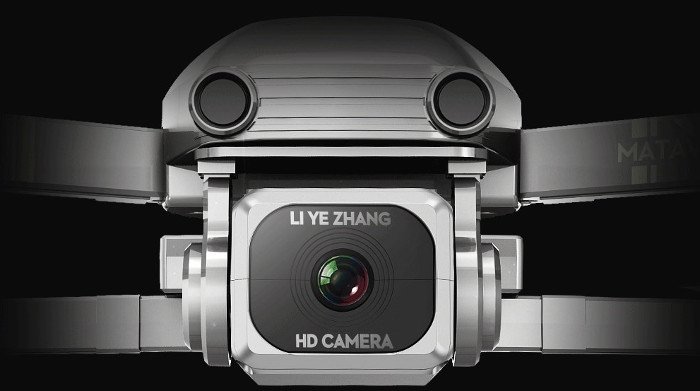 Now we come to my favourite feature of this drone although I will have a couple of harsh words to say about the dodgy advertising. The drone is advertised as having a 4K camera which is not true, not even the images look 4K, I really don’t understand why they would advertise in such a way because a 1080p camera (which it actually is) is still a good resolution at its price point.

The sales page also says that the drone comes with anti-shake and an electronic stabilisation feature, the camera is supported by a one-axis gimbal, so the first part is true. However, the app has no stabilisation icon, so the second part is a bit misleading unless they are planning on adding this feature to the app in the near future.

Let’s get something straight, this is a low-cost HD camera drone, you will not be winning any prizes for the images and videos it takes and everyone knows that, so I don’t understand why they exaggerate.

The drone has a 120° field of view and the angle can be remote adjusted 90° to get better viewing angles. It has a 50* digital zoom feature, which is pretty cool but the more you zoom in the grainier the image gets so don’t zoom in too much. The drone live streams in 720p, it’s decent quality but nothing amazing, there is also a lot of jello effect, which doesn’t really bother me because it’s a low-cost drone and I know what to expect from them.

As there is no micro SD card on the drone, you will need to record your images and videos files on your smartphone so do make sure that you have enough memory for this. The video resolution in the recorded footage will be in 1080p which is much better quality with less distortion.

Overall, it’s a decent camera but a little disappointing because of the exaggerated claims

Like most modern drones that are released now, the L109 comes with some impressive features for a low-cost drone. These include the following;

Optical Flow Sensor – Allows the drone to maintain a steady altitude in areas with no GPS signal, so if can fly this indoors.

Follow Me Mode – One of the drone smart flight modes, it will lock onto your smartphone and follow you from close proximity.

Orbit Mode – In this mode the drone will circle around you automatically.

WayPoint – Allows you to draw a flight path on the app and the drone automatically flies along the route and comes back home. A cool feature but doesn’t always work.

Gesture Mode – Take videos and images with the mere gesture of your hands, a cool way to impress family and friends.

Automatic Return Home – A feature that can be activated via the remote control or the app, once activated, the drone will return home automatically.

These are cool features to have, unfortunately, the app seems a little buggy at the moment and so they do not work all the time.

Despite my criticism of its camera, the drone flies pretty well, it can hover accurately and maintains a steady altitude during flight. It’s easy to control and its top speed is very fast, although I would advise beginners to only fly in its default speed mode so that there is less risk of crashing and damaging the drone. The live streaming could be better because of inconsistency with the app, however, overall it has a good flight operation.

This is a decent drone that operates well and is suitable for everyone if you can get past its exaggerated claims about the camera, you will enjoy flying it. Click on the button below for more information and its current price. If you want a better alternative, I highly recommend you check out my review of the Eachine E520S, a similar drone with better features.