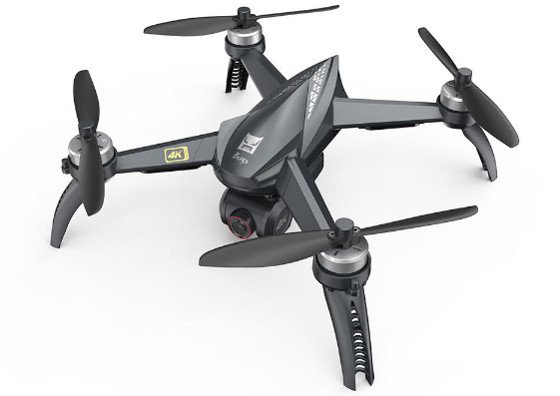 The MJX Bugs 5W 4K drone is one of the latest budget-friendly drones that come with a 4K camera stabilised by a 1-axis gimbal. The camera can both record and take high-quality images and videos in stunning 4K resolution. It also comes with GPS for precise flight positioning and intelligent flight modes that make it easier to operate this drone. It also comes with a flight time of 20 minutes which is good for a drone that costs less than $200.

Hi and welcome to my review of the MJX Bugs 5W drone.

This drone is an upgrade to the original MJX Bugs 5W which came with an HD 1080p camera, now it comes with a 2K camera supported by a 1-axis gimbal for stabilised images and videos.

MJX are pretty well-known in the world of low-cost consumer drones, may of their drones are very popular especially among people who like to modify their drone.

I have reviewed one other MJX drone, specifically the Bugs 4W which comes with a 2K camera but I wasn’t a huge fan of its overall design (a bit too bulky for my liking), although it’s still an awesome drone.

If you are looking for a cheap drone with a HD camera with some cool features, the MJX Bugs 5W is a drone worth considering, carry on reading this review to find out more.

Now, I want to nore before I start the full review, that on the product page it says that this drone is a 4K drone, while tecnically correct, it only shoots images in 4K but records videos in 2K.

The MJX Bugs 5W is a good-looking drone, it has a robust build and looks very futuristic. It has an all-black colour scheme and has some nice company branding around the body of the drone. I still don’t understand why they call it a ‘Bugs’ drone, maybe it’s supposed to resemble some kind of bug? The two LED lights at the front do resemble eyes and gives it sort of a cool mean look.

I am a fan of its overall design, if it were a foldable drone, it would have been much better. It’s not a massive drone measuring 33*33*10 cm, however, if you are going to be travelling with this drone, you will need a drone carry case as it is not a compact drone that you can easily store away in your rucksack. This is one of the reasons I prefer foldable drones, they are easier to carry around and I wish the MJX Bugs 5W was foldable because it is a good overall drone.

One the end of each rotor arm there are landing legs that will help protect the camera when you land the drone. There are also some cool LED lights underneath each rotor arm, I like LED lights on drones, not only do they make the drone look more futuristic, but they also allow you to fly the drone in twilight hours.

These LED lights also serve another purpose, when you are calibrating the drone compass, they will display a set of colours to indicate when it is ready to fly.

The 2K camera is attached on the front of the drone and is supported by a 1-axis servo and dampeners on the top. It’s a nice-looking camera with a big lens and a cool logo on the side, there is also a micro SD card slot on the back on which you will be able to record your videos and images on.

It has no optical flow or ultrasonic seniors so you will not be able to fly this drone in areas where there is a low GPS signal, which is a shame because most modern HD camera drones have these features now.

One of the best features of this drone is its brushless motors, these are powerful motors with 1500kv rating. Brushless motors are more efficient and powerful than brushed motors and they also last longer and require less maintenance. They provide the drone with more thrust during take-off and the drone can go faster, in the case of the MJX Bugs 5W, it has a top speed of 32 km/h which is fast for a non-racing drone.

The drone has a flight time of around 20 minutes, which is good for drones at its price range. 20 minutes is above average, one of the reasons for its above-average flight time is because the drone is powered by a 7.6v 2320 mAh lipo battery. This is a small modular battery that has been engineered to keep its charge for longer and hence the longer flight time.

One last thing I want to mention before I get to the main features of this drone is regarding its remote controller which I am a fan of. There are drone controllers that look really ugly but not the Bugs 5W controller which has a minimalist design and looks very similar to that of the DJI Mavic Pro controller. 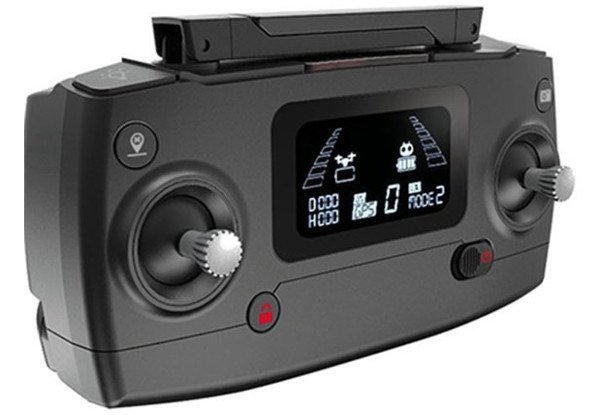 It’s a medium-sized controller that feels comfortable in your hands, it has a smartphone holder that pulls out from the back and two handles that fold out from the bottom. I don’t see the need for these handles, but some people say it provides a better grip on the controller.

One of the coolest features of this controller is its OLED screen where it will display important telemetry readings about the drone. With a quick glance you can see the GPS status of the drone, how far away it is and the battery level for both the drone and charger.

It has a transmission range of around 600 meters but this is only in optimal conditions, expect somewhere between 400-600 meters, which is still pretty good. The charger is powered by two AA batteries which unfortunately are not included with the drone package. 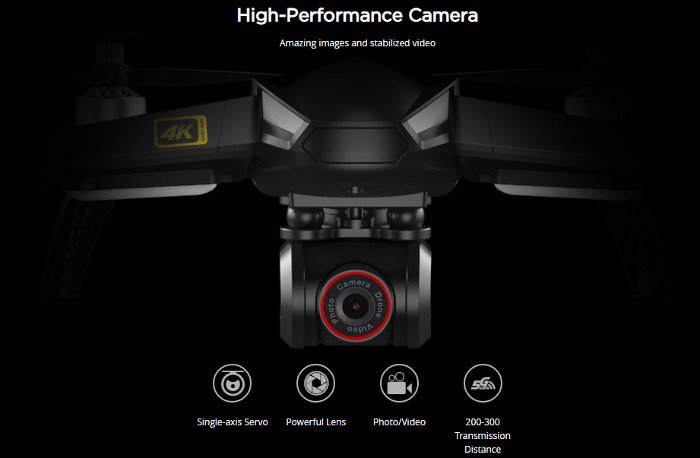 The main feature of this drone is its 2K camera which is an upgrade to the 1080p camera it used to come with.

The camera is supported by a 1-axis gimbal that will help to stabilise your videos and images so that they have little to no distortion or jello effect.

It has a wide-angle lens and a 1.2.7” CMOS sensor that produces image resolution in 4K, the quality of the images is really good. Videos can be recorded in 2K at 20fps.

The live video streaming quality is in 720p and overall its pretty good, you may get some lag if you test the limits of the transmission range but other than that the quality is impressive.

This is a good overall HD camera, like I stated earlier, it is not a true 4K camera and so the quality of the videos will reflect that. You can take good images and videos with this drone, you may sometimes notice shakiness or jello effect but its nothing to make an issue as you will only be using for recreational purposes.

However, if you do want a true 4K camera drone at an affordable price and not have to pay $1000+ for the likes of a DJI drone, then I recommend you check out my list of the best drones under $500, most of the drones on that list come with 4K cameras.

Like most new drones, the MJX Bugs 5W comes with a few smart flight modes that will make it easy for anyone to operate this drone. Smart flight modes can only be accessed via the official MJX app which is called the M RC Pro and is compatible with both Android and iOS devices.

Tapfly – This mode allows you to draw a path on the app and the drone will automatically fly along the route and come back home.

Orbit – As the name suggests, when this mode is activated you can choose a point of interest on the app and the drone will orbit that position.

Follow Me – In this mode, the drone will lock onto you and follow wherever you go, this is a good mode to use if you go for long walks.

Automatic Return Home– Another really useful feature that will minimise the risks of losing the drone or damaging it. You can activate this mode manually via the return home button on the controller or app and it will be switched on automatically if you lose connection with the drone or it gets low on battery.

One of the best things about these smart flight modes is that you can record videos or take aerial images without having to worry about controlling the drone. Smart or intelligent flight modes are not unique to a few drones anymore (like they were a few years back) which is a good thing because they are one of the easiest ways to enjoy flying if you are a beginner.

As you would expect from MJX, this drone operates very well, it has a stable flight thanks to its GPS and internal barometer. It holds up well even in slightly windy conditions but I would advise people to avoid flying in any bad weather if they are complete beginners. Check out the video below for more information.

The MJX Bugs 5W is a good drone that is suitable for everyone, its upgraded 2K camera is the best feature and will provide you will high-quality images and videos, it’s not a foldable drone which is unfortunate, but overall a very sold drone and worth the money. Click on the button below for more details and its current price.