The MJX X103W is a medium-sized drone that comes with a 2K camera and is capable of taking photos in 8MP. It’s a nice looking drone (although the body is a bit bulky for my liking) and comes with several advanced features like GPS and a few smart flight modes. The drone is very lightweight and is great to travel around with. It has a flight time between 12-14 minutes and costs less than $100.

Hi and welcome to my review of the MJX X103W 2K camera drone.

One of the main reasons I love drones is because the majority of them now come with HD cameras. Not just decent cameras but good ones that will allow you to take high-quality videos and images and this is what you will get with the MJX X103W drone.

MJX have released some very popular drones over the years, their Bugs series of drones, a couple of which I have reviewed on my blog, are very popular amongst drone enthusiasts.

The MJX X103W is one of their more recent drones and has proved to be quite popular as well. If you are searching for a high-quality camera drone for under $100, keep reading this review as it may be the drone you are looking for.

When you first set eyes on MJX X103W you will notice that it looks very similar to another MJX drone called the Bugs 4W, which is a more of an advanced version of this one. 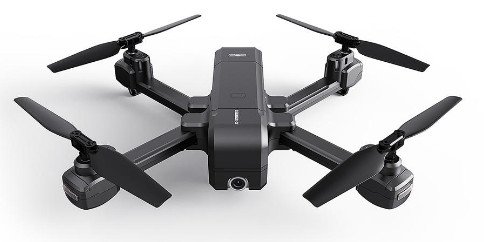 Although I personally prefer this one because it’s smaller and not as bulky as the Bugs 4W. It is a foldable drone, which are my favourite type mainly because they are easier to carry around plus, they are the perfect travel drones because they don’t take up too much space in your luggage.

The MJX X103W is not a large drone, although the main body is a little bulky, it measures 34.5*34.5*6 cm when fully unfolded and weighs just 248g, which is very light for an MJX drone, probably the lightest in their range.

Its weight is important if you live in Canada, the UK or the USA as it is less than 250g which means you will not need to register the drone if all you want to do is fly it for recreational purposes.

Most other countries will not require you to register the drone no matter what its weight is if you are just flying for fun. However, since drone laws are kind of fluid, please to check the rules and regulation of drone flight where you live.

One of the downsides of this drone is that it comes with brushed motors instead of brushless motors like most other MJX drones. Brushed motors are less efficient and not as powerful as their brushless counterparts and they also require a lot more maintenance. However, they are one reason why the drone is cheap (costs under $100), so overall it doesn’t really matter because it’s a drone you just want to have some fun with and not fly it for commercial reasons.

One the side of the rotor there are some cool LED lights, these allow you to fly the drone at night time (if you are experienced enough) and they do look really good when flown at night. The LED lights also serve another purpose and that is they indicate when the drone compass is fully calibrated which you must do before you fly.

The camera is fixed on the nose of the drone and has a wide-angle lens, it’s not the most amazing camera but for under $100, it’s pretty decent.

It’s powered by a 7.6v 1000 mAh lipo battery which is placed on top of the drone and forms part of its main body. It has several LED lights on the top to show its power level and takes a couple of hours to fully recharge.

The battery provides the drone with around 12-14 minutes of flight time depending on if you use the FPV features and weather conditions. The flight time is a little disappointing but not unusual for a drone that costs less than $100, if you want to extend the flight time of the drone, I highly recommend that you purchase a couple of extra batteries.

One of the best features of this drone is its remote controller, it reminds me of the Mavic Pro controller which has been well received by drone enthusiasts. The controller has a minimalist look which I like, and the buttons have icons, so you know what they do. It has a pair of fake antennas and a smartphone holder that pulls out from the back. One of the coolest features of this controller is the OLED screen in the middle that will display important details about the drone, like its height, distance, GPS status and battery level.

The controller requires 2 AA batteries to power it, unfortunately, they are not included with the package. So, if you decide to purchase this drone, please keep this in mind.

To use the FPV and its more advanced features, you will need to download the official MJX app, which is available for both Android and iOS devices. It’s a decent drone app and one of the better ones on the app marketplace but still has its issues, especially when it comes to live video streaming. 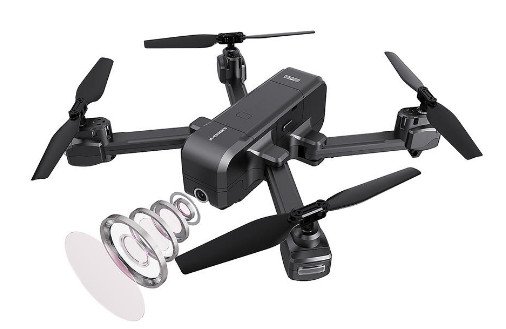 Now, we come to the main feature of this drone which is the HD camera.

This is a fairly decent camera, it has a 110° FOV and can be remotely adjusted 90° for better viewing angles. As it is a fixed camera, there is no gimbal for stabilisation purposes, so the video feed will have some jello effect and not be crystal clear. This shouldn’t really matter because this isn’t a drone you will be using for professional purposes.

The live streaming is pretty good, although the further you go out the more interference there is and its transmission range for FPV is only 300 meters, so it is best to keep well within this range for the best quality. There is a micro SD card that will allow you to record 2K video footage (live streaming is only in 720p) and for images, there is 2MP sensor which produces some good photos.

It’s a good camera especially for the price the drone is selling for but if you want a really high-quality camera drone at a low price, I highly suggest you check out the Hubsan Zino 4K drone which costs less than $300 (one of the cheapest 4K camera drones on the market)

Like a lot of modern low-cost HD camera drones, the MJX X103W comes with some advanced features that will help you fly the drone more easily and also have more fun with it. These features include the following:

GPS – Better hovering and precise positioning on the app. Also allows for the smart flight feature the drone comes with.

Follow Me– With the aid of the GPS system, the drone will lock onto your smartphone and follow you from close proximity.

Orbit Mode- The drone will lock onto you and circle your position from a height and distance of your choosing.

WayPoint – This mode will allow you to draw a path on the app and the drone will fly along that route and come back home automatically.

There is also a one-button take-off and landing feature and it has a pair of LED lights on its belly that look like searchlights when in use.

I must add that the smart flight modes I mentioned only work in areas with strong GPS signal and sometimes even then, it can be a hit and miss with these features. However, when they do work, they are cool to play around with.

As you would expect from a MJX drone, the X103W fly’s very well, it hovers accurately and maintains a steady altitude during flight. Its transmission range if you re not using the FPV feature is around 800 meters in optimal conditions, however, expect something in the region of 600-700 meters, which is still decent for a drone that costs less than $100.

There are a lot of good beginner-friendly drones for less than $100 and the MJX X103W is one of them. It comes with a good camera that is capable of taking decent videos and images, it will give a lot of enjoyment for those looking for a cheap drone with some advanced features.