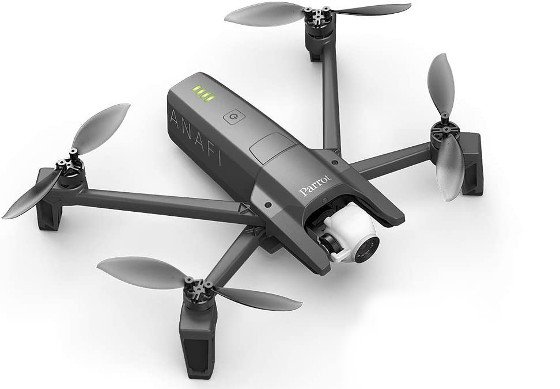 Welcome to this review of the Parrot Anafi FPV 4K camera drone.

Parrot were once the leading manufacturer for consumer drones and then DJI came along and everything in the world of drones completely changed. Parrot like other drone companies started playing catch up and while they have more or less abandoned the consumer drone market, the Parrot Anafi remains a popular drone, not quite as popular as the DJI Mavic (the drone it was supposed to challenge) but popular enough that Parrot still provides support for it.

The Parrot Anafi has been on the market a few years now, it does not cost as much as when it was first released, and you can probably find one for under $700. This is a reasonable price for an advanced drone and definitely one of the best camera drones in this price range.

The Anafi drone comes in two versions, one comes with the 4K camera and the other includes a thermal imaging camera. The version with the thermal imaging sensor is for industrial use and not targeted towards consumers.

The Parrot Anafi is a beautifully engineered drone, its frame is made from carbon fibre and the body is built with high-quality plastic. It has a unique folding mechanism that gives it an elongated look, it’s a very compact drone which makes it great to travel with. The drone package comes with a neat carry case, although, all you can fit in the case is the drone and nothing else. 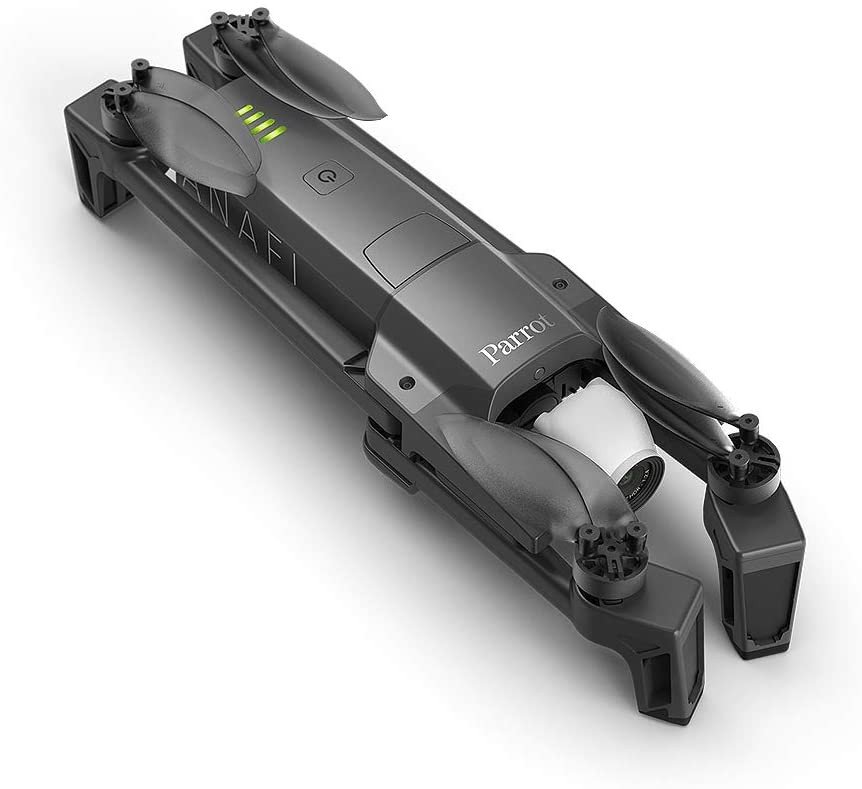 One thing I was really surprised about this drone is how lightweight it is, before the release of the DJI Mini 2 drone, the Parrot Anafi was the lightest drone that came with a 4K camera. It weighs just over 300g which means you will still need to register the drone, even if you have no plans to use it for commercial reasons.

This is because in countries like the USA, Canada and the UK, any drones that weigh at or above 250g, will need to be registered with the local aviation authority. On a side note, as drone technology advances, the rules and regulations regarding flying drones may change, this is why it’s good to keep up to date with this information so that you know what to do to comply with the law.

It comes with brushless motors which allows the drone to fly smoothly even in windy conditions and they help the drone to maintain a steady altitude when it is hovering.

The brushless motors are also one of the reasons the drone can reach a top speed of 55 km/h, which is pretty fast for a non-racing drone.

Other features include dual GPS module for pinpoint tracking on your smartphone and for autonomous flight modes. There is an optical flow sensor on its belly that helps with flight stabilisation, especially if you fly in areas with a weak GPS signal. 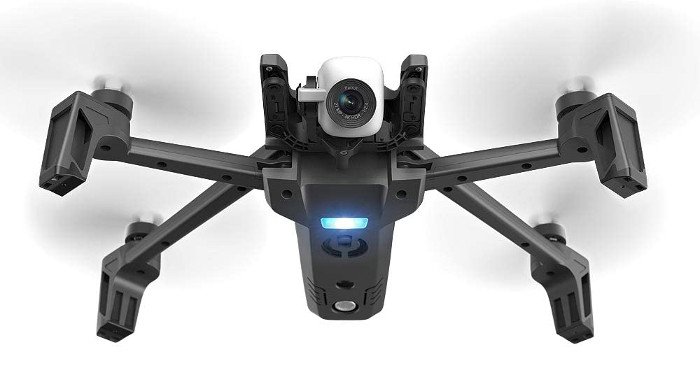 The Parrot Anafi has a flight time of around 25 minutes, this was impressive when it was first released and is still impressive now. Not many drones in this price range have a good flight time like this and the main reason is that the drone is powered by an intelligent lithium polymer battery.

The battery has an 8v 2700mAh capacity and has smart features that allows it to maintain its charge for longer, even when it is inactive. It even charges relatively quickly when compared to other drone batteries and has LED lights to indicate its level of charge.

Although 25 minutes if a pretty good flight time, if you want to use this for professional purposes, it’s a good idea to purchase at least one or two extra batteries to extend the flight time without having to wait for one battery to fully recharge.

The Parrot Anafi is controlled via the Skycontroller 3 and the FreeFlight 6 app. The controller is quite big, but it has an ergonomic design and is comfortable to hold. There is a smartphone attachment that pulls out from the middle. It has a powerful WiFi antenna that allows you to control the drone from a maximum range of around 4km (in goo weather conditions) and it is powered by an internal battery.

The FreeFlight 6 app gives you access to most of the advanced features of this drone, its compatible with both Android and iOs devices and is free to download. It has a very easy to navigate user interface and the learning curve isn’t that steep. For photographers, you get access to the cameras advanced features that will allow you to capture better videos and photos and you can fly the drone autonomously via its intelligent flight modes.

The app displays vital data about the drone’s status during flight, you can see its height, distance, speed, battery level, no. of satellites as well as easy access to all the drone’s other features.

Something that disappointed me is that to access a couple of the drone’s intelligent flight modes, you will have to pay a small one-time fee. It’s disappointing because competitors like DJI and Autel give access to similar flight modes for free on their apps.

There are also a number of commercial apps used for mapping, surveillance, 3D modelling that are compatible with the Parrot Anafi.

These apps are used in a number of different industries such as construction, agriculture, law enforcement and many others. Parrot has some informative case studies on their website on how their drone has been used in many of these industries. So, if you are a professional drone pilot or thinking of becoming one, there are more ways than just photography to make use of a drone for commercial reasons. 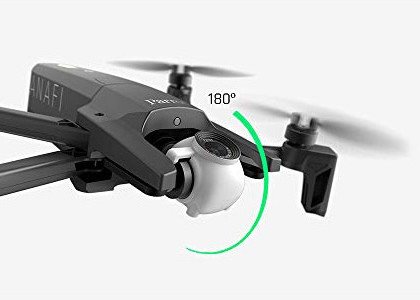 The camera is one of the best features of this drone, it’s a unique camera because you can tilt it 180° thanks to the gimbal that stabilises it. This allows you to look straight down or up, giving you a unique perspective on your drone flight and allowing you to capture videos and photos from a variety of angles.

The camera uses a mechanical and electronic gimbal for stabilisation, and this helps reduce distortion like shakiness and jello effect. The camera can record video footage in 4k at 30fps, 2.7k at 30fps and 1080p at 60fps at a speed of 100Mbps.

It has a CMOS sensor from Sony with an F2.4 lens and captures 21MP still images in both RAW and JPEG. It comes with HDR support that will allow the camera to capture more colours for clearer and vivid photos and comes with lossless zoom technology allowing you to get closer to the subject matter without moving the drone.

You can capture different types of panorama photography and record hyperlapse and slow-motion videos in FHD.

Overall, this is one of the best drone cameras on the market and as the drone is compatible with apps that specialise in things like mapping and surveillance, it is more than just a good drone for photography.

Like a lot of high-end drones with advanced technological features, the drone comes with autonomous flight modes.

Autonomous or intelligent flight modes allow you to operate the drone completely hands-free, this allows you to concentrate on capturing better videos and photos and they also make flying easier as the drone is on autopilot.

One thing you must not though is that unlike its competitors like the DJI Mavic Pro and Autel Evo, the Parrot Anafi does not come with an obstacle avoidance system, so when using these flight modes make sure the drone is higher than anything else in your surrounding or fly it in an area with little to no obstacles.

There is a flight mode called cameraman, it’s not technically a smart flight mode because you will have to control the drone’s movement. The cameraman mode allows you to lock the camera on any subject matter and camera will remain fixed on it no matter where you fly the drone.

The drone has a flight mode called point of interest that will allow you to orbit a position from a height and distance of your choosing. There is also touch and fly mode which basically lets you control the drones flight path by touching positions on the app.

It also has a feature called smartdronies, it will allow you to record short videos or photos via 4 pre-programmed flight paths called boomerang, parabola, orbit and dolly zoom.

Another smart feature is its automatic return to home capability, this is activated whenever the drone goes out of range or the drone battery gets low on charge. This is a feature that many GPS enabled drones have and it minimises the risks of losing the drone in mid-flight.

There are a couple of flight modes that can be accessed via in-app purchases, one is called follow me mode and the other is called flight plan mode. It’s disappointing that two of the more popular flight modes are behind paywalls as other drone apps provide them for free.

Overall, the Parrot Anafi does what it says, the drone is easy to operate, even beginners will find this drone easy to fly. Thanks to its advanced flight features, the drone fly’s well and can hover with little to no drift. Despite being a lightweight drone, it even fly’s well in mildly windy conditions. The live video feed is pretty decent and as long as you fly in good weather, there is hardly any frameskip. Flight time is fairly good and, you can easily get around 22 minutes (the official time is 25 minutes), the camera is amazing and versatile, you can do more than just professional photography with, especially if you buy the one with the thermal imaging camera.

So, is the Parrot Anafi suitable for you? If you are looking for a high-end camera drone that is suitable for professional-photography and doesn’t cost over $1000, then yes, this is a good choice for a drone. It comes with some fantastic specs and is a very versatile drone, it can be used in many industries and is suitable for everyone. If you want some more options, then check out my list of the best drones for photography, otherwise click on the button below to purchase this drone from Amazon.