The Parrot AR Drone Elite is a beginner friendly drone that will provide a fun flying experience for everyone. It comes with an HD camera with fpv capability. It has a durable design and can take the occasional bumps,it is also easy to fly and is controlled via a smartphone or tablet. The flight time is 12 minutes and it is compatible with VR headsets for a more immersive experience.

Welcome to my review of the Parrot AR drone 2.0 elite edition, as you can tell by its title, it’s in its second update and has some awesome features that would make it a good choice for any level of drone flyers.

I have carried out a few reviews of drones that are good recommendations for beginners and whilst most of them are good some of these drones have cameras that are less than satisfactory. The parrot elite 2.0 is definitely one of the better fpv drones for beginners and its main camera is HD quality, not good enough for professionals but better than most in its price range.

Parrot have been making RC toy aircraft’s long before the big players that now dominate the drone market. The Parrot Elite 2.0 is a great drone for beginners as it has some really cool features that make it easier to fly this drone.

The elite 2.0 has another variation called the power edition, the main difference between this and the elite is the battery life in the power edition is much longer and the drone is a bit more expensive.

Let’s take a look at its features and spec. Here is what to expect with one of the best toy drones in the market. 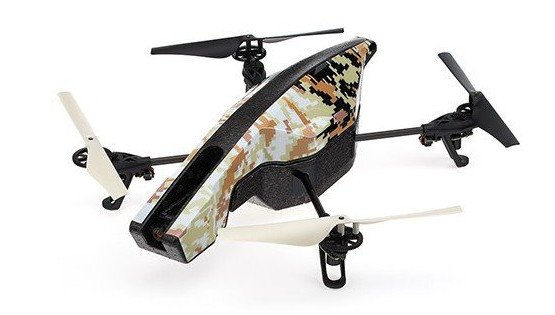 The second gen model descendant of the Parrot line, this quadcopter is an improvement from the previous model and showcases the hard work put in by the Parrot line over the last decade. One of these improvements is the battery life, it comes with 1000mAh lithium polymer battery which provides you with up to 12 minutes of flight time.

Although, if you shop around you can find a compatible 2000mAh battery to double that amount.

I would definitely suggest purchasing more batteries as flying this drone for just 12 minutes will not fulfill your flying needs. If however, you buy the power edition you can expect a flight time of around 30 minutes.

The Parrot 2.0 is one of the best Wi-Fi controlled quadcopters in its class that is currently available on the market. The fact that you can control it via a tablet or a smartphone is one of its great perks.

This mid-tier flying machine is incredibly versatile – you can perform stunts and tricks or even throw a bad-ass barrel roll at the push of a button.

To top it all off, the integrated 720p HD camera which can work for both Android and iOS allows you to capture all the fun and send the footage directly to the connected device. Additionally, via the AR FreeFlight app, you can upload your videos directly to YouTube.

As I stated this is one of the better drones for beginners, with advanced features that Parrot have patented like absolute control mode which lets beginners control their drone more easily.

First and foremost, the power Edition of this quadcopter has been redesigned to look more stealthy and futuristic. The only contradicting colour comes from the coloured rotors. Which are furnished in red, blue, orange and yes, of course, black.

Hence if you are a fan of the dark side, the all black Parrot AR drone is for you. The elite 2.0 comes in three camouflage styles: Sand, jungle, and snow. I personally love the colour scheme of the power edition, its very pleasing on the eyes.

This Parrot quadcopter is made to ensure, first, the build and quality of this drone are in a high tier compared to other beginner lever drones. The frame is made of carbon and nylon material and it comes with brushless motors which are assuredly more reliable and durable than the cheaper brushed motors in the market. The drone comes with 2 Styrofoam bodies one for indoors and one for outdoors. They are easily slipped on around the frame of the drone for better protection.

I can’t continue with this Parrot AR.Drone 2.0 Elite Edition Quadcopter review without talking about this drones best feature the awesome HD 720P camera. If you are looking take decent-quality aerial film footage but do not want to pay the price of a DJI phantom model, look no further than this quadcopter. The onboard 720p HD camera has a 93-degree field of view and records video at 30 FPS and directly sends the footage to a connected HD device.

If you are looking take decent-quality aerial film footage but do not want to pay the price of a DJI phantom model, look no further than this quadcopter. The onboard 720p HD camera has a 93-degree field of view and records video at 30 FPS and directly sends the footage to a connected HD device.

You also have two options to record aerial footage,one is to stick a USB drive in the device or you can buy parrots own flight recorder which comes with GPS but it is rather expensive.

As stated, the drone is controlled via your tablet or smartphone although if you are technically minded you can purchase a remote controller and link it up with the drone.

The AR FreeFlight App,which is parrots official drone app, allows you to pilot this device quite easily the app also comes with a myriad of advanced controls such as limiting the drones speed and attitude.

You can also take off, hover and flip with the single touch of your screen, tweak and perform great maneuvers as you like.

The quadcopter comes with a 1000mAH rechargeable lithium polymer battery that offers about 12 flying minutes. This isn’t nearly enough time to enjoy flying a drone, I always suggest to buy extra batteries for any drone you purchase. Although if you want a longer time flying this drone on a single charge you can either buy the power edition or purchase a longer lasting battery.

Overall the  Parrot AR.Drone 2.0 Elite Edition Quadcopter is definitely worth comsidering, everything in this drone’s suite of features will please 99.9% of the those beginning their drone journey. The power edition lets you fly for longer although it is more expensive. It is a good drone for beginners but it also has features that experienced pilots will like. If you are looking for a fun drone that will not break the bank and takes some quality photos and video footage, then this drone will be one to consider.

However, it is an old drone and there are better options at similar price points, click on the button below for my list of the best drones for beginners.