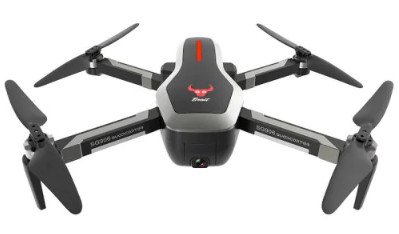 The SG906 drone is a well-designed foldable drone that comes with an HD camera, dual GPS modules and intelligent flight modes. The camera can shoot images in 4K and record videos in 2K, it does not have a gimbal but there is a stabilisation feature within the drone app which does a decent job of reducing distortion in the videos and images. It has several intelligent flight modes which are fun to use (when they work) and a flight time of around 20 minutes. This is a decent drone overall and suitable for everyone.

The consumer drone market is huge, it seems like there is a new drone coming out every month. In this article, I will review the SG906 drone, a relatively new drone that boasts a host of advanced features including a 4K camera (although that last bit is a bit misleading as you shall see).

In this age of drones, we are really spoiled for choice, especially when it comes to advanced drones at affordable prices.

The SG906 drone is one such drone that comes with some stunning features and costs less than $200!!

If you are in search of a high-quality drone with an HD camera and several advanced features, the SG906 drone is worth considering. Keep reading this review and see what this relatively new drone has to offer.

First of all, I have to say that the SG906 is one of the most beautiful drones I have come across. It’s a foldable drone which is awesome because they are my favourite type of drone and I really like its overall design. 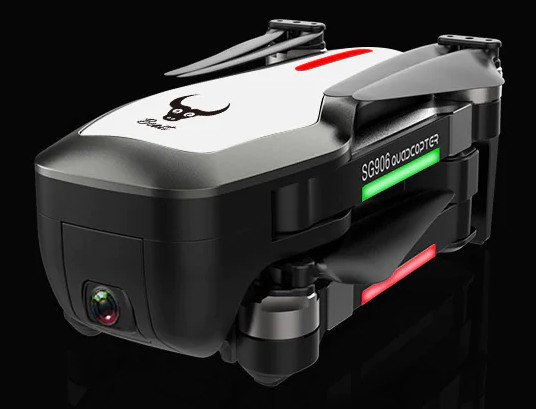 It comes in two colours all black or white with black propeller arms, I personally prefer the black version, it just looks more futuristic and stealthier. One the top there is a cool logo of a bull with the word’s beast beneath it, I suppose that’s why the drone is also known as the SG906 Beast.

The drone is built from plastic, but it doesn’t feel cheap, it can withstand a bump or two and not get damaged seriously. It does look gorgeous when it is folded up and measures only 17.4*8.4*7 cm, this makes it very compact and easy to carry around. Plus, you also get a cool carry case, so if you travel frequently, you will not need extra luggage space for the drone.

The drone weighs just over 500g, it’s not that heavy but because it weighs over 250g, you will need to register the drone if you live in the UK, Canada or the USA. Most other countries do not require you to register a drone regardless of weight if you are using purely for recreational purposes. However, since drone laws are kind of fluid, please do check what the rules and regulations are wherever you live just to be safe.

Like most drones nowadays, the SG906 has some cool LED lights on its arms, however, they are not underneath the arms but on the side and they look quite spectacular if you fly the drone during the night.

The SG906 drone is equipped with powerful brushless motors, these motors are the reason the drone has a strong take-off and a top speed of 25 km/h which is fast for a non-racing drone. The other advantage of having brushless motors is that they are more efficient, last for longer and require less maintenance.

It has an official flight time of 25 minutes, although, its usually a bit less, so expect something around the 20-minute mark, which is still pretty decent for a drone that costs less than $200. You can probably extend the flight time a little bit more if you decide not to use the drone’s camera which is highly unlikely, so its best to purchase a couple of extra batteries. Fortunately, you do get the option to buy the drone with two or three batteries which I highly recommend instead of having to purchase some later on.

Speaking of batteries, the SG906 drone is powered by a 7.4v 2800 mAh lipo battery, this is a modern modular battery that maintains battery charge for longer. Its longer than most drone batteries I have seen and fits in the back of the drone. To fully recharge the battery takes around 6 hours and this is the other reason I always recommend people purchase extra batteries, you really do not want to wait that long just to fly the drone for around 20 minutes.

One of my favourite parts of this drone is its remote controller, it’s `well-designed controller that has a minimalist look and is comfortable to hold. The buttons are all easily identified by their icons and there are four LED lights in the middle to indicate the battery power level. 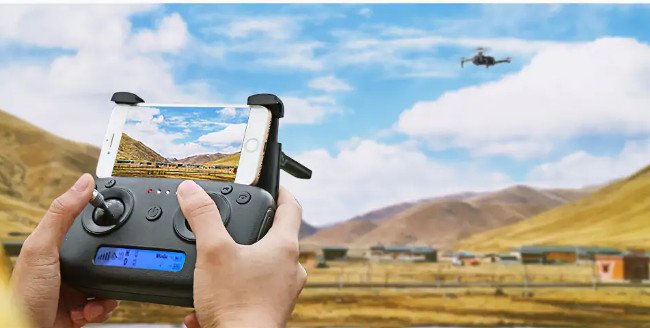 There is a nice smartphone holder that folds out from the back, as far as I can tell, it can only hold smartphones and not any kind of tablet. A really useful feature of this controller is the LCD screen on the bottom that has a blue backlight. With a quick glance, you can how strong the GPS signal is, the height and distance of the drone, what mode you are flying in and the battery level for both the drone and controller.

I also have to note that the controller takes four 1.5v AA batteries, however, they are not included with the packages. So, if you do decide to purchase this drone, keep this in mind.

Now, to make use of the drones FPV feature and smart flight modes, you will need to download its official app which is called HFun+ and is available on both the Google Play Store and Apple App Store. It’s a decent app with a nice user interface and is easy to navigate and figure out al the options. Like a lot of drone apps that have not been developed by the likes of DJI, Yuneec or Parrot, it has its issues, especially when it comes to the smart flight modes, but on the whole, it works and they do update it regularly.

One of the main reasons I love drones is because of their cameras, they let you see and experience the world from a different perspective and see places you may not have otherwise.

The SG906 drone comes with an excellent HD camera, it has a 120° wide-angle lens and the camera can be remotely adjusted 60° to get better viewing angles.

Now before I go any further, I just want to clarify something. This drone is advertised as being 4K, which is technically true, however, it only takes images in 4K and does not record videos in that resolution. This is kind of misleading and I have seen it with other drones as well, if a drone has 4K in its title, it is normal to assume it means 4K video and not images. They should really clarify this for better transparency.

Having said that, the camera can record in 2K which is pretty decent, don’t get me wrong, the videos will not win you any prizes but their overall quality is good for the price you pay. Something you may notice is that the videos have a jello effect, this is because the camera is not stabilised by any kind of gimbal.

There is a stabilisation option on the drone app, which does produce better quality images and videos, but they are in 1080p and not 2K. There is also a small camera on its belly, it works as an optical flow sensor and so you can fly the drone in areas with a weak GPS signal.

The FPV quality is alright, however, the live streaming video quality is only in 720p and it can get a little distorted if the conditions are not perfect. The transmission range for live streaming and video recording is around 350 meters but expect around 300 because the official number is usually overstated.

Despite costing less than $200, this drone comes with several advanced features which will make it easier ti fly the drone and give you a more fun flying experience. These features include the following;

Dual GPS – Allows you to lock onto more satellites for more precise positioning and better flight stability. GPS also allows for the intelligent flight modes the drone comes with.

Optical Flow Sensor – Allows you to fly the drone indoors and areas with low or no GPS signal.

Gesture Shoot – Take photos and images through the mere gesture of your hand. The drone has to be within 1-3 meters of yourself for this feature to work

WayPoint – Allows you to draw a flight path on the app and the drone will automatically fly along the route.

Point Of Interest – Choose a point of the app and the drone will orbit that position from a height and distance of your choosing.

GPS Following – In this mode, the drone will lock onto your phone and follow you wherever you go, this a great flight mode to use when you go for long walks.

These are really cool features, however, please be warned that sometimes the smart flight modes do not work as they should. This is most likely a flaw within the app which they have not yet rectified properly.

The drone fly’s well, its main features work as they should and it’s easy to operate. However, as I mentioned earlier, you may run into some problems with the intelligent flight modes, they do not always work as they should. You will see lag in your video feed if you tets the limits of the transmisison range and the video footahe does have some jello effect.

This is a decent overall drone, for less than $200, you do get a lot with the SG906 drone which includes an HD camera, dual GPS and many other cool features. It’s a good drone and worth its price, click on the button below to find out more details and its current price.