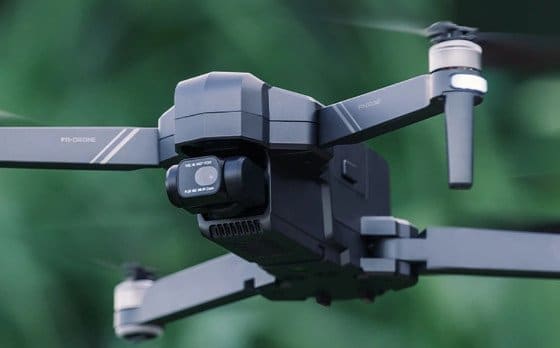 The SJRC F11 4K Pro is a very good drone that comes with advanced features such as its HD 4K camera with a 2-axis gimbal and electronic image stabilisation. The drone comes with a dual GNSS receiver, an optical flow sensor, brushless motor, and 25 minutes of flight time. The drone also comes with intelligent flight modes and an automatic return to home feature. A good overall drone at a reasonable price and suitable for everyone.

Hi and welcome to my review of the SJRC F11 4K Pro foldable drone, this is an upgrade to the original SJRC F11 Pro, and it is definitely one of the more impressive drones for under $200.

SJRC are a small drone brand but they are very popular, all their drones are cheap and don’t cost more than $300. The SJRC F11 4K Pro is one of their more advanced releases and comes with a host of features that are usually found on more expensive drones.

If you are looking for a cheap beginner-friendly drone that comes with a good HD camera and some advanced features like a dual GNSS module, long flight time, and autonomous flight modes, this may be the drone for you. Keep reading the full review of the SJRC F11 4K Pro to find out what else it has to offer.

One thing I must mention about this drone is that there are a couple of other versions exactly like it but sold under different brand names. For example, the Ruko F11 Gim drone (which I have reviewed here) and the Deerc DE22 drone seem to be the same drones but under different brands and also priced differently.

While SJRC F11 4K Pro is sold on marketplaces like Banggood, Geekbuying, etc, the other two I mentioned are sold on Amazon USA and they are the more expensive ones. So, if you do decide to purchase this drone after reading this or any other review, you will need to make a choice of where to purchase the drone from. Whether to pay more for Amazon’s fast shipping times and superior customer service or pay less and wait a couple of weeks or more for the product and not receive the same level of customer support.

So, now that I have got that out of the way, let’s get back to the review of the SJRC F11 4K Pro drone. This is a foldable drone, which is most probably the most popular type of consumer drones and foldable drones are my favourite kind of drones as well.

However, the design of this drone is not very aesthetically pleasing to the eyes and this is mainly because of the drone’s large battery which goes on top. It gives it a very bulky look which I don’t particularly like, and it adds to the drone’s overall weight which is just under 600g.

The weight also means that you will need to register the drone if you live in the UK or the USA. In the UK, recent changes in drone laws mean that anyone flying a drone over the weight of 250g will also need a basic flyer ID which requires you to take a basic theory test. Please do check the rules and regulations regarding drone flight wherever you may live so that you are complying with the law.

The weight does have a benefit and that is it can be flown in windy conditions, but only fly in any type of windy conditions if you are an experienced, drone pilot. Another benefit is that the battery is a lithium polymer battery with an 11.1v 2500 mAh capacity which provides it with a flight time of around 25 minutes, which is very good for a drone that costs less than $200, there are not many drones in this price range with that kind of flight time.

If you want to extend the flight time and not wait for the battery to fully recharge (which takes over 4 hours) before flying again, it’s best to purchase at least one more battery. You do get the option the buy the drone with one or two extra batteries, which I highly recommend you do instead of having to purchase them separately later.

One of the advanced features of this drone is that it is installed with powerful brushless motors which are usually used for drones that are used for racing. The powerful KV rating of brushless motors allows for a more stable flight experience and better hovering accuracy. They also last longer and don’t require constant maintenance after every flight.

One more thing I want to mention before I get to the main feature of this drone (its camera) and that is the remote controller. This is a nice controller which isn’t too big and follows a similar design pattern to the original Mavic controller.

It’s powered by an internal battery which means you will not need to purchase any extra batteries which is a bonus. One of the best features of the controller is its large LCD screen which displays vital telemetry data about the drone, for instance, with one glance you can see the drone’s height/distance, battery level, GPS signal strength, and flight mode.

There is a smartphone holder on top that will allow you to attach a large smartphone and it has a pair of handles that pull out from the bottom for a better grip.

In good weather conditions, the controller provides a transmission range of around 1km, however, since both UK and USA laws require you to keep the drone within your line of sight, I don’t think you will be flying it that far out.

To get access to the drone’s FPV features and intelligent flight modes, you will need to download the SJRC Pro app. This is a decent app that has a good rating and is updated more than some of the other small drone apps and the app is relatively easy to use.

Now, the main upgrade to the original SJRC F11 Pro is the camera which can actually record in 4k and doesn’t look like it’s being scaled up from a lower resolution. The quality of the video footage is very good for a drone under $200, as long as the weather is not too windy, the video footage is smooth thanks to the drone’s 2-axis gimbal and electronic image stabilisation.

Something you have to be aware of is that to record video footage in 4k, you will need a micro SD card of class 10 or higher and formatted to FAT32. There is a memory card slot on the drone but unfortunately, you don’t get one with the drone package. Otherwise, you will have to record on your smartphone over WiFi and while the quality is good, it’s recorded in 1080p, and because it is recorded over WiFi, there may frame skipping and breakups in the video footage.

The FPV range is around 800 meters and is transmitted in 720p resolution, as long as you fly in good weather and there are no obstructions between you and the drone, the live video feed is of good quality.

The drone comes with three GPS-enabled intelligent flight modes, these include waypoint mode, which allows you to draw a flight path on the drone app and the drone will fly along that route automatically. The other two intelligent flight modes are called follow me and orbit mode, follow me is pretty self-explanatory, the drone locks on to your smartphone follows you from behind. Orbit mode is kind of similar but instead of following you, the drone will circle you.

You do need a strong GPS signal to use these flight modes and they are fin to use and a great way to record and capture video/photos without having to worry about controlling the drone.

Another intelligent feature is the drone’s automatic return to home function, this feature will reduce the risk of losing the drone in mid-flight. It’s activated whenever the drone goes out of range or when the battery gets low on charge. It can also be activated manually via the remote controller or the app.

Overall flight performance for the SJRC F11 4K Pro is very good, it fly’s steadily even in windy conditions thanks to its bulky design, powerful motors, and weight. As it is a pretty advanced drone, it’s easy to operate and even beginners will have no problem flying it. Everything works as it should the intelligent flight modes work and the return to home function. It has multiple speed modes, so if you are a beginner, I would keep it on its default setting but as you become more experienced, you can start to test your flying skills by switching speeds.

This is a good drone that is suitable for everyone, it’s relatively cheap at just under $200 and fun to fly. As I mentioned, there are other drones under different brands that are sold on Amazon, but this one is cheaper and is sold on Banggood. If you want alternatives to this drone, check out this article that lists the best drones under $200. Otherwise, click on the button below to find out more about the SJRC F11 4K Pro drone.