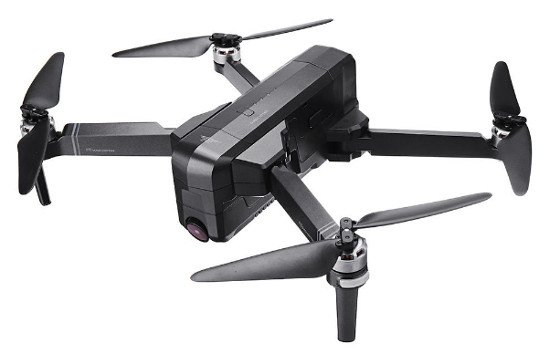 The SJRC F11 Pro is a good HD camera drone that comes with a 2K camera, intelligent flight modes and 25 minutes of flight time. It’s a foldable drone, which makes it great to travel around with and it comes with 2 batteries that give it a longer flight time. Although I like the drone, the body is a bit bulky which kind of puts me off and the camera has no gimbal for image and video stabilisation. However, with the 2K camera and advanced features its an overall quality drone.

In my opinion, cameras are the best features of a drone, I really love the aerial view they allow you to see and HD cameras make it even better. A few years back HD camera drones were few and far between and very expensive, however, with the ever-growing popularity of drones, there are a lot more choices at affordable prices.

The SJRC F11 Pro is one of these drones that comes with an HD camera and some cool features at an affordable price.

One of the first things that will impress you is the drone carry case, it’s a small and the drone and its accessories fit in nicely. It’s perfect for travelling with as it can be easily packed away in a small backpack or suitcase.

The drone itself is a foldable drone (my favourite type of drone ) and is made from ABS plastic that is highly durable and has a very solid structure. This means it will not be easily damaged if you lightly bump it against something. 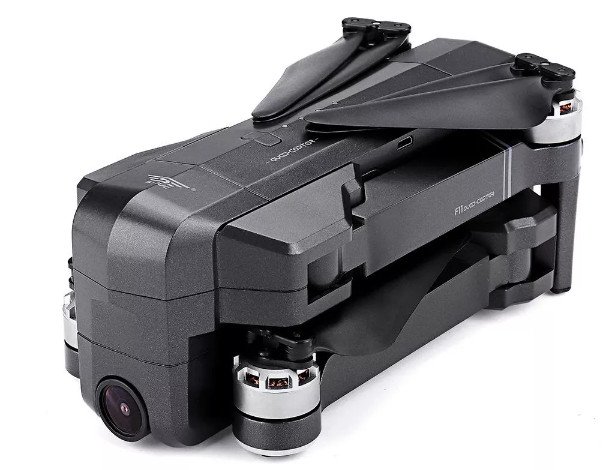 It’s a medium-sized drone that measures 45*42.5*8.3 cm unfolded and weighs just over 500g. In its folded form it’s like a thick rectangular box (the body is quite large), this makes it very compact and a great travel drone. Actually, in my experience, all foldable drones make great travel drones and the SJRC F11 Pro will make a good travel drone.

However, in all honesty, this is one of the few foldable drones where the overall design does not impress me. The large body kind of puts me off, other than that it’s a solid drone.

It has powerful brushless motors that are more efficient, last longer and require little maintenance. Plus they are one of the reasons the drone has a top speed of 40 km/h which is fast for a drone that is not designed for racing.

The rotor arms are well constructed and do not feel like they will break when you pull them out, they all have cool LED lights underneath them and these serve a couple of purposes.

First of all, they look awesome especially at night and they also help to indicate when a drone compass is fully calibrated. The LED lights also indicate when there is a technical problem with the drone, the manual lists all the different ways the lights will flash and the problems associated with them. This is really helpful as you will be able to diagnose and fix any problems that may arise with this drone much more quickly.

The official flight time for this drone is stated to be 30 minutes, which is awesome and way above the average flight time for a drone in this price range. However, I have found that drone companies usually overstate their flight times and it is usually a few minutes less. Still, a flight time of 25-27 minutes is still way above average and the best way to extend this time is to purchase some extra battery (which is what I always advise people).

Speaking of batteries, the SJRC F11 Pro is powered by a 11.1V/2500 mAh lithium-ion battery, it has a USB connector on the side for charging and LED lights on the top to indicate the level of battery charge.

Fully charging the battery takes around 4.5 hours, which is quite a long time and another reason why you should consider purchasing some extra batteries, you really don’t want to wait that long to fly the drone again. 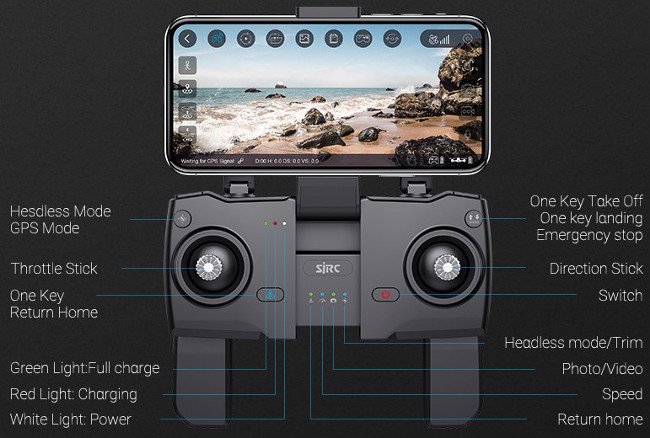 The remote controller for the SRC F11 Pro is exactly the same as its predecessor, it’s small, has two fake antennas and two grippers that pull out from the bottom. It has a minimalistic design and is comfortable to hold, all the controls are within easy reach and it has a smartphone holder that pulls out from the middle.

It has some LED lights from where the smartphone holder pulls out from and these indicate what flight mode the drone is in. One thing you need to aware of is that it comes with a non-replaceable internal battery that you can charge with a USB cable.

The official control range is 1200 meters, but this is in optimal conditions, expect something less and it’s always well advised to keep the drone well within this distance. If you are going to be making use of the FPV features (and you most likely well) the control range is 500 meters and again this number is only if you fly in the best condition possible.

To use the FPV feature you will need to download the SJ-GPS Pro app, its compatible with both Android and iOS devices and is a good app that is updated regularly. The interface is intuitive and you have access to most of the features of the drone including the intelligent flight modes.

Now, as I stated earlier, the favourite part of any drone for me is its camera, seeing the world from above is an amazing experience and being able to take high-quality images and videos is even better.

The SJRC F11 Pro lets you do this with its HD camera.

The camera has a 120° wide-angle view that will allow you to capture more image and video details and can be adjusted 90° via the remote controller which will give you more angles to get your perfect shot.

Although it’s a 2K camera, you can only live stream in 720p@25 fps which is still pretty good. However, you can record 2K quality on an SD card and play it back on your smartphone or any other device and share it with family and friends.

The one issue with this camera is that it does not come with any kind of image or video stabilisation system. There is no gimbal or software for this purpose and sometimes this can be noticed in the video footage and images. It’s not a huge deal as you are not looking to create professional-quality aerial images and video footage and overall the quality is pretty good.

As you would expect from an advanced drone, the SJRC comes with several intelligent flight modes that will make it easier to fly and takes images and video footage.

Waypoint – Draw a flight path on the app and the drone will automatically follow that route and come back home. An easy way to record video footage or aerial images of your favourite places.

Active Track – In this mode, you can choose someone or something for the drone to track.

Point Of Interest – Choose a position on the app and the drone will orbit it from a radius of 2-10 meters.

Follow Me – The drone will lock onto your smartphones GPS signal and follow you wherever you go. A cool way to record yourself when you go on holiday and impress people.

Headless Mode – This mode is good for people who are not very experienced drone pilots. The controls are straight forward, and you do not need to know the orientation of the drone.

Gesture Mode – A cool feature that a lot of drones are now including, you can take selfies and record yourself through mere hand gesture.

Automatic Return Home – A really useful feature, you can return the drone home through the simple push of a button on the controller. This mode is also activated automatically if you lose connection or the battery is on low charge. This minimises the risk of losing your drone.

Dual GPS -With dual GPS module, the drone can lock on to both GPS and GLONASS satellite systems so GPS signals will always be strong wherever you decide to fly the drone.

Overall flight performance is very good, it hovers accurately and controlling the drone is pretty easy. Most of the intelligent flight modes works as they should, however, if the GPS signal is weak, they may not work properly.

FPV is also pretty good, although, without the assistance of any kind of gimbal, the video can be shaky at times. below to see how it fly’s.

This is a very good drone, it comes with a good camera and some advanced features and is most suitable for people who have a little experience with flying drones, although it’s safe for beginners as well. I would recommend this drone, click on the button below for more information and its currnt price. However, if you want a better alternative, check out the latest drone from DJI, which is the Mavic Mini, its DJI’s most budget-friendly drone and comes with all of their signature features including an amazing 2.7k camera with a 12MP sensor, super lightweight and 30 minutes of flight time, click here for information on the DJI Mavic Mini.

Although this is a suitable drone for beginners, there are better options at similar price points, click on the button below for more details on the best drones for beginners.