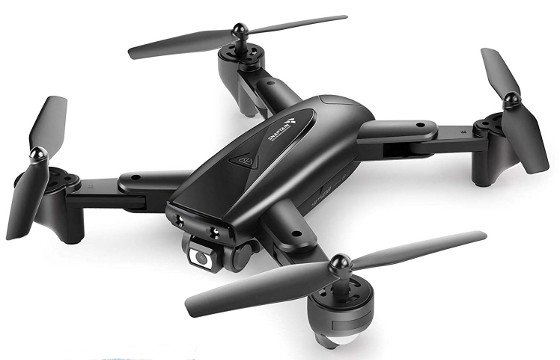 If you are looking for a cheap HD camera drone with some advanced features, the Snaptain SP500 will be a good choice. It comes with a 1080p camera, GPS and some cool features like gesture control mode that will allow you to take images and videos through hand gestures, which will definitely impress family and friends. It has a flight time of 15 minutes and comes with two batteries, so you don’t have to purchase any extra, it’s a good overall drone that is fun to fly and suitable for beginners.

Hi and welcome to my review of the Snaptain SP500 foldable HD camera drone.

Foldable drones are my favourite types of drones and when I heard that Snaptain had released one of their own, I just had to review it.

Snaptain are a relatively new company that manufacturers toy grade drones, they have released some decent drones and I have already reviewed a couple of them, specifically the S5C and SP600.

When it comes to drones, I always make sure that they come with a decent camera because that is my favourite feature of a drone, not only does the Snaptain SP500 come with a camera but it also comes with some cool features that make it a fun drone to fly, although it does have some issues which I will expand on in this review.

If you are looking for a budget-friendly drone for beginners, keep reading this review because the Snaptain SP500 may be a good choice for you.

The Snaptain SP500 is a foldable drone but in my opinion it does not have the sleekest design, the rotor arms do not fully fold up and this makes it look a bit bulky in its foldable form. I stated that foldable drones are my favourite but the SP500 doesn’t really impress me when its folded up. 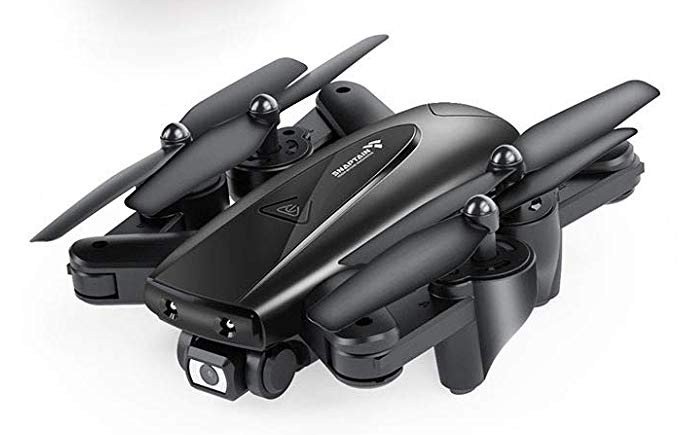 However, when it is fully unfolded, it does look good, its not a big drone measuring at just 12.9*12.9*2.2 inches, however, with its weight over 250g, you will need to register this drone if you live in the USA, Canada or the UK, if you live in any other country, please check the rules and regulations before flying.

The Snaptain SP500 is a well-built drone, it doesn’t feel fragile like a lot of toy drones and it can withstand the occasional bumps without any serious damage to its structure.

It comes ready to fly, there is nothing for you to install, except for the battery and propeller guards. The propeller guards are for extra protection and I highly recommend you use them, especially if you are new to flying drones.

It comes with brushed motors which are not as efficient or powerful as brushless motors and they will require a bit more attention when it comes to maintaining them. The props are easy to install, and you get 6 extra ones just in case any of them are damaged.

The HD camera is situated on the  nose of the drone and there are a couple of LED lights at the front which is will be useful for orientation and night time flying.

There are also some cool green and red LED lights underneath each rotor which not only look spectacular during the night but they are there to indicate when the drone’s compass is fully calibrated.

The drone is powered by a 7.4v 1000 mAh lipo battery, which will give you a flight time of around 15 minutes. This is a pretty good flight time and you get an extra battery with the drone package, so you will not need to wait the 3 hours it takes to re-charge the battery to fly again.

The last thing I want to mention before I get to the main features of this drone is the remote controller. It’s a nice-looking controller that feels comfortable, it has two handles that pull out from the bottom that will provide a better grip. 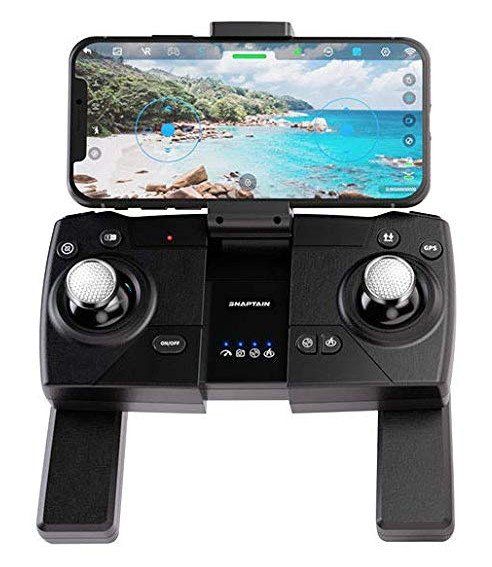 It has a minimalistic design, it actually reminds me of the DJI Mavic Pro controller, which a lot of the small drone companies are copying. The control sticks are easy to move around, and it has a smartphone holder that pulls out from the middle. The holder is large enough to hold a big smartphone but not a tablet, there 4 small LED lights in the middle that indicates what state the drone is in.

It’s powered by an internal rechargeable 3.7v lithium-ion battery and you get a cool USB cable to recharge it with which has some green LED lights that indicate when the batteries are fully charged.

Just a quick note that the drone is only compatible with smartphones that are 5G enabled, so if your smartphone is fairly new, you will most likely be able to use it.

You can also control the drone via its Nova app, this is a decent app but has some issues and can be a little bit buggy at times. However, it is updated regularly so they do try and patch up bugs as soon as possible.

Now, as I stated earlier in this review, my favourite feature of a drone is the camera and the Snaptain SP500 does come with a good HD camera that will allow you to take some cool aerial images and videos.

The camera has 110° FOV and can be pitched 40°, although you will have to do this manually before you fly the drone, which is a bit of a let-down, as it would have been far more convenient to do it remotely with the controller.

Although it has a 1080p camera, when you are using the FPV feature, the streaming quality is 720 @24fs, which is okay. The drone does have a micro SD card slot on its belly in which you can record 1080p quality videos and then replay them back on your phone or another device.

One problem with this drone is that it does not have any kind of gimbal system or stabilisation software for your images and videos. It does come with GPS and  altitude hold which will allow for a more stable flight and better hovering capability and the images and videos turn out to be better because of these features.

FPV range is around 200 meters on a good clear day and the further, the drone gets to this limit, the more choppy the video stream becomes. So, if you stay well within this range, FPV is clear and you can get some pretty good video footage of the area you are flying around.

On the whole, this is a pretty good camera, especially for how much the drone costs, however, don’t be expecting to shoot professional quality videos and images with a budget-friendly drone such as the SP500.

The SP500 comes with some cool features that will help you fly the drone and make it a more fun experience.

Headless Mode – This is a flight mode especially good for beginners as the controls are easy and straight forward to understand and you will not need to know the orientation of the drone.

Gesture Control – This is a cool flight mode that a lot of cheap drones now come with, it allows you to take photographs through the mere gesture of your hands. This is an Impressive feature that is a lot of fun to play around with.

TapFly – This is another flight mode that I am seeing a lot more of in cheap drones, it allows you to draw a path on the drone app and the drone will follow that route automatically, allowing you to concentrate more on taking quality images and videos.

Circle Fly – This is also known as orbit mode, you choose a point of interest and the drone will fly around it.

Follow Me Mode – In this mode, the drone will lock on to your phone and follow you wherever you go. A pretty cool flight mode to have when you go for a long walk.

Return Home – This mode can be manually activated via the remote control or within the app, once activated, the drone will return to where it took off from. This mode is automatically activated if you lose connection or when the battery gets low. The feature works well, but sometimes the landing can be a little off, but not by much. You can also adjust how high up the drone should be before it returns home just so it doesn’t come up against any kind of obstacles.

One whole, the drone fly’s very well, the GPS keeps the drone steady and you always have a lock on where it is via the app. If you fly without GPS ( which I don’t recommend for beginners ) it can be a little hard to control and the flight isn’t always smooth. The FPV stream is pretty good for such a cheap drone but if you test its range to the limit, its not always clear and connection can sometimes be lost.