Snaptain SP510 Review – One Of Snaptains Most Advanced Drones 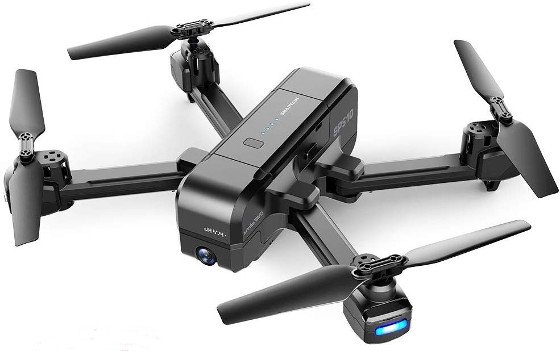 The Snaptain SP510 2.7K camera drone is medium-sized foldable drone that is lightweight and easy to fly. The camera can record on 2.7K at 24fps (on a micro SD card) and take 12MP images. It comes with some advanced features like GPS, smart flight modes and automatic return home. You can also stream live video footage in 720p and it has a flight time of around 14-16 minutes. A decent overall drone that costs less than $200.

Are you looking for a full review of the Snaptain SP510 2.7K camera drone? Well, you have come to the right place.

We live in the age of drones, they have grown so fast in popularity that it seems like there is a new consumer drone coming out each week. Snaptain have released some very good beginner-friendly drones that cost less than $100. The SP510 is a little more expensive, costing just under $200 but it does come with some advanced features and a good camera.

I will be honest, the Snaptain SP510 2.7K is a good drone, but there are better options at similar price ranges and if you are willing to spend a little bit more there is an exceptional drone that I highly recommend.

However, first, let’s see what this drone has to offer.

Ok, so if you are a regular reader of my blog you may notice that the Snapatin SP510 looks very similar to a couple of other drones I have reviewed on this blog. Specifically, the JJRC X11 and Bugs 4W, although it is not as advanced as those drones.

Not complaining though because overall despite a few reservations, this is a decent drone and one that you will enjoy flying.

Like a lot of drones that are being released now, the Snaptain SP510 is a foldable drone. Many of you will know that foldable drones are my favourite type of drones mainly because they are easier to travel with as they are very compact in their folded form and so do not take up much space in your luggage. 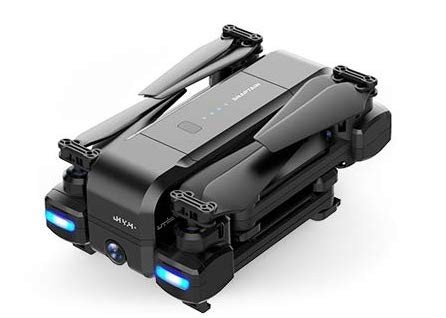 However, one aspect of this drone I am not a huge fan of and that is its main body which for me is a little bulky and not very aesthetically pleasing to the eyes. That’s just a personal preference and probably a minority one seeing how popular this drone has become.

I do like its all-black colour scheme and it has a robust build which you should expect from a drone that costs nearly $200. In its expanded form it measures 13.8*12.4*2.4 inches, so it’s a medium-sized drone and not very heavy. Although it does weigh around 272g which means if you live in the USA, Canada or the UK, you will need to register the drone before you can fly it.

For most other countries there are no specific weight requirements if all you want to do is fly any drone for recreational purposes. Still, I recommend you check out what the rules are wherever you live just to be on the safe side of the law.

Like almost all drones, the Snaptain SP510 has some cool LED lights on the end of its rotor arms. These lights serve a couple of purposes, first, they look awesome when you fly the drone at nighttime. Plus, they will also help to indicate when the drone compass has been fully calibrated.

One thing I was surprised by is its brushed motors, most of the drone that I have reviewed at this price point come with brushless motors which are far more efficient and powerful. So, it was a little disappointing that the SP510 came with these types of motors. It’s not a huge deal but the motors will require a little more maintenance and they are quite loud.

The camera is situated on the nose of the drone and it is a fixed camera so there is no gimbal system supporting it. I will talk a bit more about the camera later but I just want to elaborate on a few more features of the drone.

It has a micro SD card slot on the bottom which is compatible with cards up to 128GB which will be more than enough to record your videos and images on. Plus, to get the full 2.7K quality of the camera, you will need to record the video footage on the card, otherwise, the video quality is 1080p if you record it on your smartphone. Also, the quality of your smartphone will also determine how good the overall video footage will be.

The drone is powered by a 7.4v 1500 mAh lipo battery which goes on top of the drone and some nice little LED lights that indicates it power level. The battery provides the drone with a flight time of around 14-16 minutes depending on how aggressively you fly the drone and if you use its FPV feature (which you most definitely will). Now, 16 minutes is a decent flight time but there are drones that have better flight times at similar price points. 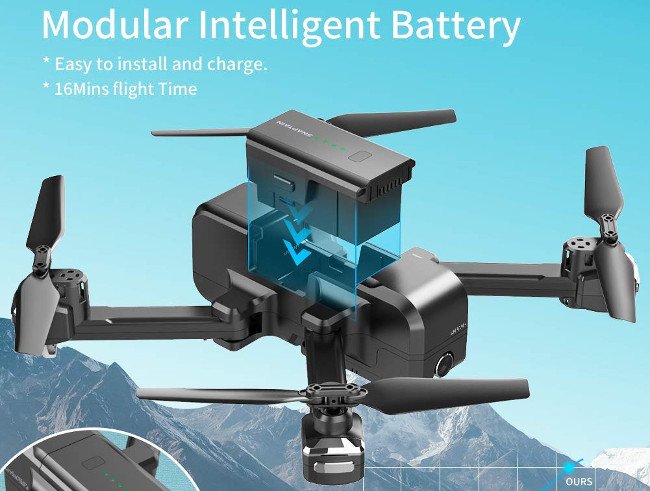 Also, you only get one battery which is a shame, so if you want to extend the flight time, you will need to purchase an extra battery which will cost you an additional $30. Also, the battery takes over 2 hours to fully recharge, so it is best to purchase one extra battery because you really don’t want to wait around a couple of hours only to fly the drone for only 16 minutes.

One of the best aspects of this drone is its remote controller, it is a nice and simple controller that has a minimalist design which I am a fan of. Its small and has a pair of handles that pull out from the bottom and a smartphone holder that pulls out from the middle. The buttons are clearly labelled so you know what they do, and it has a dial on the top that will allow you to adjust the angle of the camera. It also has an internal lipo battery that can be charged via USB cable, which is provided, so no need for any battery purchases for the controller. 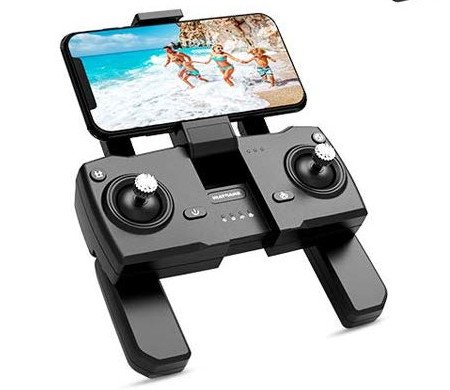 The last thing I want to mention before I get to the camera is the Snaptain Nova app which you will need to download to make use of its FPV and smart flight modes. Now, I have come across some not so good drone apps (this is the one area where many companies could vastly improve their overall product), however, the Snaptain Nova is one of the better drone apps on the market.

It has an easy to use interface and the app is updated regularly, plus you also get access to more features which is a bonus. 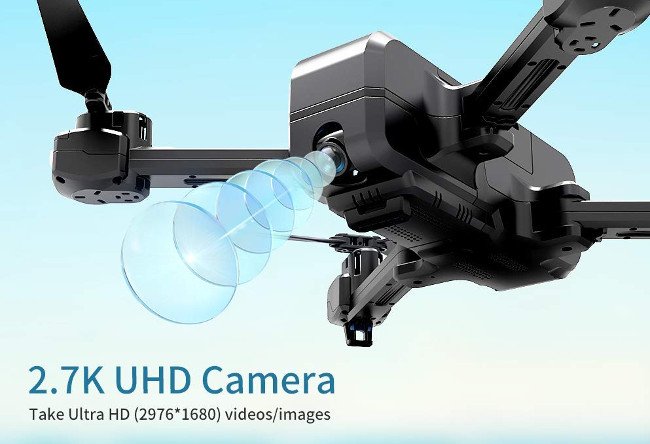 One of the best things I love about drones is the fact that most of them come with cameras, even if its standard 480p camera, you can still have a lot of fun taking picture wit your family and friends. The camera on the Snaptain SP510 is better than standard, it is a 2.7K wide-angle camera that can record some good video footage.

It’s not a professional camera drone, so you will not be winning any prizes, however, it is not meant for people who are looking to take some awesome video footage of the sandy beaches of Malibu.

The camera does not have any kind of advanced stabilisation features, so you may notice some jello effect and shakiness in your videos, so for the best quality, it’s best to fly when the weather is good.

The live streaming quality is pretty decent, it isn’t 2.7K, that resolution can only be recorded on the micro SD card, instead its 720p, which is still nice. The transmission range for the FPV is around 300 meters if it’s a clear day and there are no obstructions. Overall, it’s a nice camera that will allow you to take some good video footage and aerial images.

However, if you want a drone that can take stunning videos and images and the quality is near what the pros would want, I highly advise you to check out the Hubsan Zino 4K drone, it will cost you around $100 extra, but for a 4K drone, it is worth it.

As I mentioned earlier, as one of Snaptains most advanced drones, it also comes with a few advanced features which include the following;

GPS – Allows you to track the drone on the app and fly the drone more safely. The GPS module also allows the drone to have a few smart flight modes that are fun to operate.

Follow Me – In this mode, the drone locks on to your smartphone and follow you wherever you go.

Orbit – Similar to the follow me mode, in Orbit mode that drone will circle you from height and distance you set within the app.

Waypoint – Allows you to draw a flight path on the app and the drone automatically flies along that path and comes back home.

Automatic Return Home – This feature can be manually activated by pressing the return home button on the controller or app. It activates automatically if you lose connection with the drone or the battery gets low on charge. A cool feature that will minimise the risk of losing the drone.

Just a reminder, that for the smart flights to work properly, you will need to be in an area with a strong GPS signal, otherwise all the modes may not work as they should.

The drone flies very well, it holds up and maintains a steady altitude when in hover mode and is easy to control. It has three-speed modes and is quite fast, so if you are a beginner, I would advise you to fly in its default speed. The maximum transmission range is just under 500 meters but expect something a little less. I would stay within the 400-meter mark just to be safe.

This is a good drone and very fun to fly, the 2.7K camera will allow you to take some cool videos and images. I wish the flight time was a bit more and also wish they included an extra battery but overall, I am impressed with this drone. Click on the button below for more information and its current price.