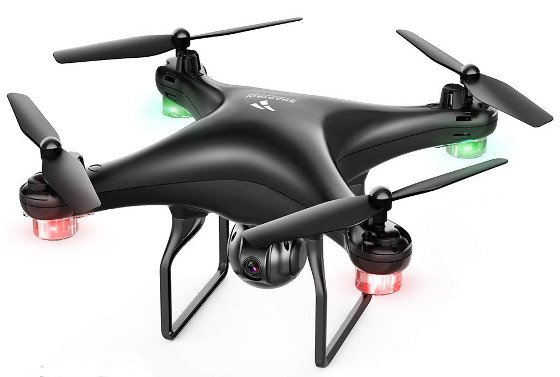 The Snaptain SP600 is one of the best beginner-friendly drones I have reviewed, it comes with some amazing features, the best of which is its 720p HD camera that has a 120° wide-angle view that will capture better images and videos. Other impressive features include voice and gesture control, one intelligent flight modes and 15 minutes of flight time.

Welcome to my review of the Snaptain SP600 drone.

If you are in the market for a beginner-friendly drone that costs less than $100 but also comes with some advanced features, keep reading this review because the Snaptain SP600 may just be the drone you are looking for.

In the fast-growing world of consumer drones, there are a lot of companies that have developed some amazing budget-friendly drones, many of these drones, I have reviewed on this site.

One of these drone companies is Snaptain, they are relatively new to the drone manufacturing scene, but they have released some impressive drones and in this review, we shall see how their latest drone, the Snaptain SP600 is becoming another popular drone for beginners.

If you are a drone enthusiast, one of the first things you will notice is how similar the Snaptain SP600 looks to the DJI Phantom range of drones, especially to the Phantom 4. This is not by accident, DJI are the leaders in the consumer drone market and for a very good reason, their drones are not only technologically superior to anything else on the market but their designs are also very appealing. 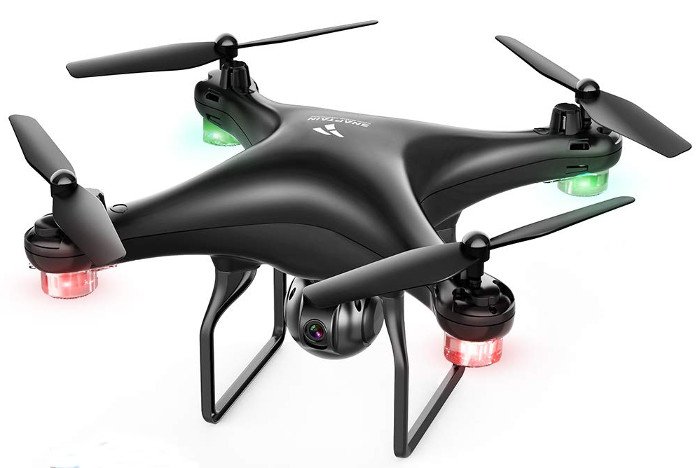 This is why many smaller drone companies have used them as a model to design their own drones. The Snaptain SP600 is well designed, its made out of durable plastic and is very lightweight and it doesn’t feel like one of those cheap drones that will breakdown very easily.

It looks very futuristic with its all-black colour scheme and the colourful LED lights underneath each of its rotors. These LED lights also make it suitable to fly during twilight hours, the drone also comes with propeller guards that will minimise any damage that may occur should you ever crash the drone.

There are a couple of landing gears that come with the package, these will help protect the camera during regular or emergency landing.

The drone takes one 1300 mAh battery, these are the modern modular batteries that manage to keep the charge for longer. This results in a longer flight time and in the case of the Snaptain SP600, you get a maximum flight time of around 15 minutes from one battery charge.

15 minutes of flight time for a drone that costs less than $100 is very good and probably better than anything else in this price range. However, it’s still not enough to fully enjoy the drone, this is why I always advise people to purchase extra batteries. Fortunately, the drone package does come with an additional battery, so you get two batteries with the Snaptain SP600.

One other feature I really like about the Snaptain SP600 is the remote controller which looks like how a modern drone controller should look. Its week-designed, has rounded edges and feels very comfortable in your hands. 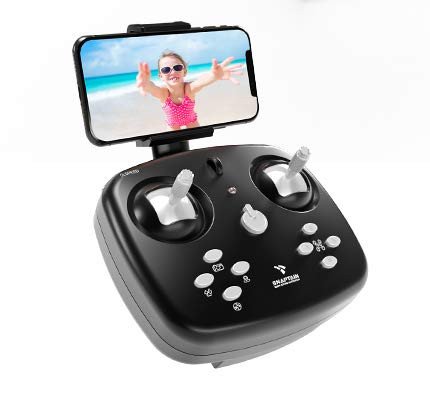 The control buttons that allows you to access the different features the drone has are all withn easy reach and they all have icons next to them so that you know what each button does.

There is a separate smartphone attachment that you fix on the top of the controller and it has a video transmission range of around 60 meters in good weather conditions. If you do not use the FPV function, the transmission range is slightly longer at around 80 meters.

The controller takes 4*1.5v AA batteries which are not included with the package, so remember to purchase some if you buy the drone.

You can also fly the drone just with your smartphone via the Snaptain Era app that is compatible with both Android and iOS.

The best feature of any drone is the camera that comes with it, I love drones with camera because they let you see the world from a completely different view and the Snaptain SP600 comes with a very good HD camera.

The camera will allow you to take stunning aerial images and video footage in 720p resolution. The camera angle can be manually adjusted to a certain degree up or down, this was a little disappointing as it would have been more convenient if you could have adjusted it through the remote controller. However, we are talking about a drone that costs less than $100, so you should not expect a full range of premium features for such a cheap price.

The drone does not come with any kind of advanced image and video stabilisation feature, however, there is a 6 axis gyroscope which helps it maintain a steady altitude and also minimises any distortions that may occur in your images and video footage.

Overall, the camera quality is very good especially for the price it is currently selling at.

There are a host of other features that will make this drone a joy to fly, they include the following;

VR Headsets – The drone is compatible with VR headsets which will give you a more immersive flying experience.

Voice and Gesture Control – Control the drone with just your voice or the movements of your hands. An impressive feature that will wow your family and friends.

One Button Return – To minimise the risk of you losing the drone, it comes with a one button return feature that will bring the drone back to where it took of from.

Headless Mode – Fly the drone without having to worry about which way it is facing, this is especially helpful when the drone is far away and its hard to differentiate between its front and back. Beginners should always fly using headless mode until they are confident in their flying skills to fly without it.

Low Battery Indication – When your battery is on low charge, your remote will make a continuous beeping sound to alert you so that you can bring the drone home before the battery completely runs out and you lose the drone.

3D Flips – The drone will do a 360° at the push of a button, another cool feature to show off to friends and family.

The drone fly’s very well and despite not having any kind of GPS system, it has good hovering capability. It is pretty easy to fly, there is only an issue if you decide to fly it in windy conditions, it struggles to stay in position, especially if you want to hover, so I would not recommend that you fly it harsh weather condition unless you are a highly experienced drone pilot.

There is also one intelligent flight mode called trajectory flight, in this mode you simply draw a path on the app and the drone will automatically fly along that route and come back home. A really amazing feature especially for a drone this cheap.

I am constantly amazed at the continued evolution of drones, a few years back a drone of this quality would have cost twice as much but now its less than $100. The Snaptain SP600 is a really impressive drone, it comes with some cool features and is suitable for everyone. I highly recommend it for first time drone pilots.