The Syma X5C is a lightweight beginner friendly drone that has a few cool features that makes it a fun drone to fly. It comes with an HD camera that is capable of taking still images in 2 megapixels. The camera also comes with a 2 GB memory in which you can store your images and videos to edit and share. You should get around 6 minutes of flight time,a little bit more if you remove the propeller guards. It also has cool LED lights beneath each rotor which makes it suitable to fly during twilight hours. This would make a great drone for beginners and kids

Today I will be reviewing the Syma X5C drone, the X5C has been out on the market a few years but it still remains a very popular drone,especially for beginners.

If you are in the market for a beginner level drone, you are spoilt for choice, there are lots of good drones out there for inexperienced drone flyers. The Syma X5C is one of those drones this quadcopter is brilliant for beginner level drone pilots.

The Syma X5C is relatively cheap and one of the best drones at its price point, flying it isn’t so hard and because it comes with a 6 axis gyroscope so it holds up well in light winds. 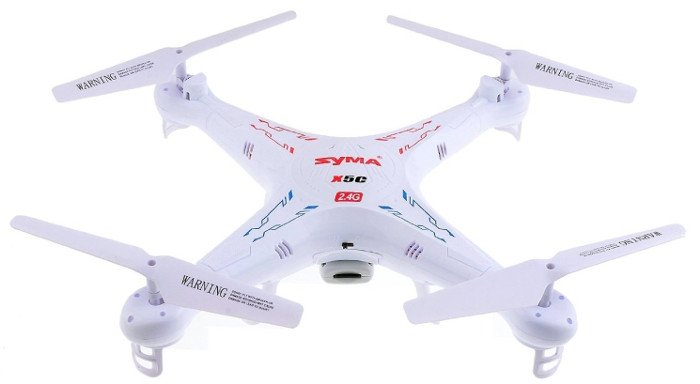 It comes with an HD camera (Calling it HD may be stretching it a bit), a 2GB microSD card and comes ready to fly. It also won’t cost you the earth to acquire as it can be bought for a reasonable price.

Although this is rather an old drone, it was first released around 2014, the drone is still very popular and fun to play with, it will make a great gift for teenagers. Like I stated the drone comes ready to fly and it comes accompanied with a user manual so make sure to follow all instructions before flying.

Like nearly all drones for beginners, it can be used inside and out and although it’s made of plastic, it is still very durable and it comes with propeller guards so they won’t break when crashing.

However, If you do manage to crash it (which is likely if you are a beginner) spare parts for the drone can be purchased from many online retailers like Amazon and Gearbest. For its size the quadcopter is surprisingly quite light this is made evident should you fly this drone in a strong wind which I advise you don’t.

Inside the box, you will get the following:

The X5C comes with a 6-axis gyroscope, which basically makes it easier to fly. Hovering the drone is possible but because it doesn’t come with GPS  technology, it requires a bit more skill so always make sure you have full control when flying this quadcopter.

It comes with LED lights near its propellers which make it look funky and great for night time flying. It uses a 3.7v 500 mAh lithium polymer battery which fits in a socket situated where the camera is attached.The Syma X5C flies best in conditions with minimal wind, anything above a strong breeze and the drone will start drifting away and making it harder to control.

The drone also fly’s much better if you remove the camera and propeller guards, it feels much more stable and you’ll probably get a few more minutes of flight time without the extra weight.

The transmitter is very basic and comes with your usual two joysticks to control the drone, it also has trim features to adjust the sensitivity of the controls. On the top right, there is a button that has two functions.

Its primary use is when the camera is attached, you can take photos or record video footage via a button on the controller. Should the camera and propeller guards be taken off, you can do some cool flips with the push of a button.

The transmitter’s range is about 50-60 meters and it requires 4 AA batteries to operate. It is always advised to have spare batteries for both drone and transmitter.

The drone comes with a decent camera, although the packaging says HD its not in the same class as a drone like the Eachine E520S, for the price you are paying, it is a bargain.

The average flight time is between 7-10 minutes, although this can be extended if you remove the camera and propeller guards (but not by much). The average charge time for the batteries is around 90 minutes, so it is always advisable to have spares. Check out the aerial footage, not bad for a drone under 100 dollars.

Syma to have more toy grade drones in the market with more advanced features but eh X5C has remained popular despite the increasing competition.

In summary, this is one of the better camera drones for beginners, you will not get DJI quality photos or video footage but for those starting out, it’s perfect. The drones zips around pretty fast and can be sometimes hard to control but after some practice, this gets easier. It’s designed to withstand a few crashes and spare parts are widely available through stores like Amazon and eBay. There is a bit of a learning curve for drones like these but at this price, this really isn’t an issue. If you’re looking for some mindless fun and take want to take aerial pictures and videos without breaking the bank, you can’t go wrong with the X5C.

I would have liked it a bit more if it had FPV capability like the Hubsan X4h107d, it certainly would have made the flying experience much more fun. Its transmitter also looks a bit outdated when compared to the newer toy drones. However, it still does what it supposed to do.

If you’re looking for some mindless fun and take want to take aerial pictures and videos without breaking the bank, you can’t go wrong with the X5C.