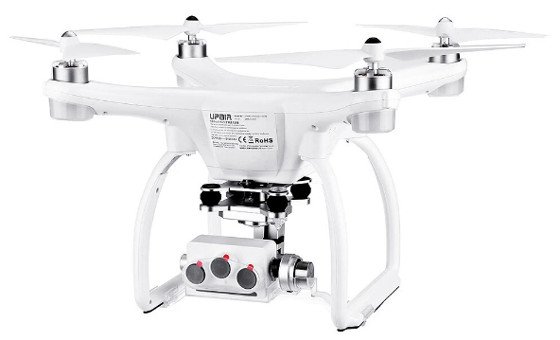 The Upair 2 is a big drone that comes with advanced features that include a unique 4k+3D camera. You can capture some amazing videos and images and fly the drone autonomously thanks to its two intelligent flight modes. The drone comes with a dual GPS module, ultrasonic and infrared sensors that will allow you to fly the drone when there is no GPS signal. Other features include a 20 minute flight time, automatic return to home and a 1km range. Update to the review, it has come to my attention that the website for the company that makes the Upair drone is currently not working and customer service is not very good. Although retailers are still selling their drones, you should be aware of these issues before you decide to purchase any of their drones. Check out my list of the best drones under $300 for some good alternatives.

Hi and welcome to this review of the Upair 2 ultrasonic 4k camera drone.

This is the successor to the Upair one, which I have reviewed here and is a pretty decent drone.

There are a lot of relatively cheap drones (when compared to the big names like DJI & Autel) that now come with actual 4k cameras. The Upair 2 is one of these drones and as you shall see from this review, it is a good alternative to its more expensive rivals.

So, one of the first things you may notice, if you are a drone enthusiast is that the Upair 2 drone may look familiar to you and that is because it is designed to look like the more sophisticated and expensive DJI Phantom drones. 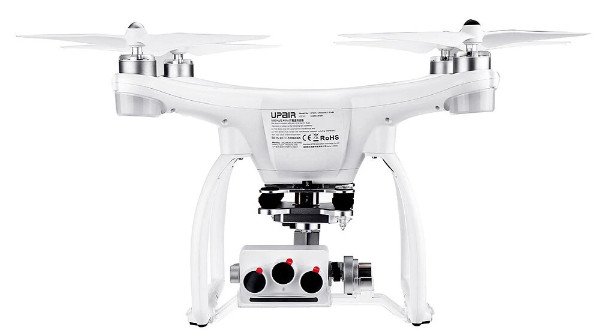 I don’t think this is by coincidence, DJI are the most popular drone company in the world but not everyone has the budget for their drones (although they have tried to rectify this with their recent release of the Mavic Mini drone). So, many smaller drone companies started to copy many aspects

I personally am not a huge fan of the Phantom range of drones, don’t get me wrong, feature-wise, they are amazing, especially the Phantom 4 Pro, but they are big and heavy and can be a bit of nuisance to travel with. This is why I prefer foldable drones and why I am not overly enthusiastic about the Upair 2 drone, because it too is a big drone and weighs around 1.45kg.

The advantage of big drones like the Upair 2 is that you can fly them in windy conditions, and they are robust and will not get damaged easily. The drone comes with a GPS module that will allow you to track the drone on the app and fly the drone autonomously via its smart flight features. There are also a couple of ultrasonic sensors and an optical flow sensor on the bottom for better flight stabilisation, this is especially useful if you are flying in an area with a weak GPS signal.

This is a very fast drone thanks to its powerful brushless motors, it can reach a maximum speed of around 50 km/h. The propellers are also big, which helps with better hovering capability and provides a smoother flying experience. Underneath each rotor, there are big LED lights, if you are an experienced drone pilot, these lights will help you fly the drone in twilight hours and it does make for really nice spectacle watching drone zip around with LED lights on.

Like the Phantom drones, the Upair 2 has a pair of landing legs that will provide better protection to the gimbal and camera when you land the drone.

I will talk more about the camera further down this review but suffice to say, it really is a unique camera that will allow you to view your video footage in 3D via a VR headset.

The drone is powered by an intelligent battery that provides it with a flight time of around 20 minutes, this is a decent flight time, although there are drones that are priced similarly but come with a better flight time.

It is a smart battery that keeps its charge for longer and has LED indicators on the back to highlight its power level. One thing I must add is that it does take a few hours to fully recharge, so if you want to fly for longer, you should purchase an extra battery.

The final thing I want to mention before I get to the camera is the remote controller, if you are familiar with the original Upair drone, you will know that it came with a remote controller that had an integrated 7-inch LCD screen for FPV.

I have always wished that more drone companies would implement this feature as it saves you from having to use your smartphone and draining your battery. However, the controller for the Upair 2 drone does not come with this feature, which is a shame. 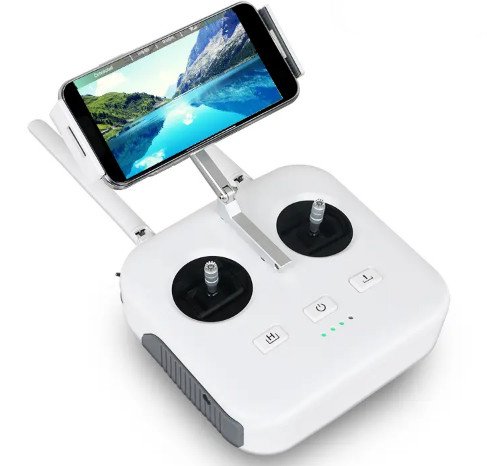 It’s still a nice controller, its big and has an ergonomic design and has curved edges which make it comfortable to hold. There is a smartphone/tablet holder that pulls out from the middle and small LED lights on the bottom that will indicate what state the drone is in. The controls are easily identifiable, there are three buttons near the bottom for power, take-off and automatic return home. On the top, there is a dial for controlling the gimbal and gear on the left to switch between its 3 flight modes.

It’s powered by an internal lithium polymer battery, so need to purchase any additional batteries for this controller. For video and image transmission it works on the 5G frequency, so if you want to use the drones FPV feature and smart flight modes, you will need a smartphone that is compatible with 5G technology.

To view the live video feed and use smart flight modes, you will need to download the Upair app which is available for both Android and iOS devices. This is a relatively simple app and is very easy to use, however, it does have some negative reviews on the Google Play Store, although I have noticed that a lot of people do not read the instructions properly before attempting to fly the drone. Having said that, there does seem to be more issues with apps from smaller drone companies, which I think is because they do not have the manpower to fix bugs as soon as they are identified. 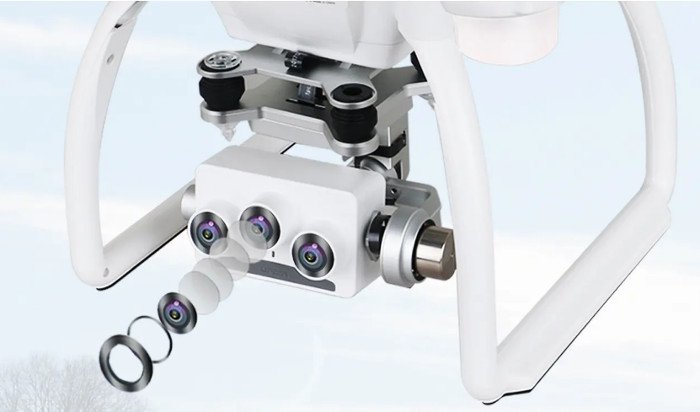 So, there is no doubt that one of the main reason’s drones have become really popular over the past few years is because many of them come with amazing cameras. This allows you to take amazing videos and capture stunning HD images of many places you may not have otherwise seen.

The Upair 2 camera is really unique in that there are actually three cameras in one casing. The main camera can record video footage in 4k at 30fps and comes with a 1/2.3-inch image sensor from Panasonic which can capture 16MP still images. The lens has a 110° FOV and you can control the gimbal to get better viewing angles.

This is an impressive camera and the 4k footage is very good, the colours are sharp and there is no noticeable distortion thanks to its advanced mechanical 3-axis gimbal. Video transmission range is around 1km in good weather, so its best to keep well within this range for the best lag-free video footage. There is a micro SD card slot on the bottom of the camera and to record videos at the best resolution, you should purchase a fast memory card, something above class 10 with a maximum capacity of 64GB.

The other two cameras can record in 2.7k and 2k respectively and they are used to view the footage in 3D via a VR headset. I am not a huge fan of this feature, seems a little gimmicky but some people may find it fun to use.

Overall, the camera is impressive and for its price, I think it is worth it, however, if you want more options for HD camera drones at a similar price, click on the button below for the best drones under $500.

Like a lot of modern GPS drones, the Upair 2 comes with 2 intelligent flight modes that will allow you to fly it completely hands-free, giving you more time to concentrate on shooting better videos and photos.

These flight modes only work in areas where there is a strong GPS signal, so make sure you are locked onto a lot of satellites before flying in any of the intelligent flight modes.

One of these flight modes will lock onto your smartphone and follow you from behind and the other will allow you to draw a flight path on the drone app and it will fly along that route automatically.

Another intelligent feature is the automatic return home function, this is activated whenever you lose connection to the drone or if the drone battery gets low on charge.

This is a good drone, its relatively easy to fly, especially in its GPS mode and because it is a big and heavy drone, it holds up well in windy conditions. Flight time is pretty decent at 20 minutes, you may get a few minutes extra if you don’t fly at its top speed and the weather is good. It maintains a steady altitude during flight and hovers accurately when you let go of the control sticks. Live video is streaming is surprisingly good quality with little lag as long as you stay well within the transmission range.

Should you get the Upair 2? It’s a good drone, fly’s well and comes with a very good camera with a unique 3D recording capability. My only issue is that it is a big and heavy drone but that does have its advantages, still, I personally prefer foldable drones because they are compact and usually weigh less than 1kg.