The Visuo XS809HW is a medium-sized foldable drone that comes with a 720p HD camera and some decent features. It’s a great drone for beginners to learn how to fly, it weighs less than 200g and comes with features like one-key take-off and return, automatic return home and 3D flips. It has a flight time of 10 minutes and a transmission range of 80 meters. Not the best drone I have reviewed that is under $100 but still an overall decent drone.

Welcome to my review of the Visuo XS809HW foldable drone.

Are you looking for a cheap drone to purchase? Preferably something under $100 that also comes with a camera and some cool features? Luckily there are a lot of choices for you and the Visuo XS809HW is one of them.

Visuo are a relatively new name in the world of low-cost consumer drones, I have only reviewed one other Visuo product and that is the Visuo Zen K1, which is a pretty decent drone ( you can find out more about it here)

It still surprises me how cheap camera drones are nowadays, if you are a first-time flyer and looking for a cheap drone to learn how to fly and have some fun at the same time, keep reading this review of the Visuo XS809HW and see what you get for less than $100.

First of all, I just want to get something off my chest, who came up with the name XS809HW? Seriously, anything else would have sounded better than that name!!

The Visuo XS809HW is a small foldable drone, foldable drones are probably the most popular types of drones, made especially popular by the release of DJI Mavic Pro a few years ago. However, the DJI Mavic Pro is expensive and not everyone needs a professional aerial photography drone, this is the reason why there are many cheaper alternatives and the Visuo XS809HW is one of them. 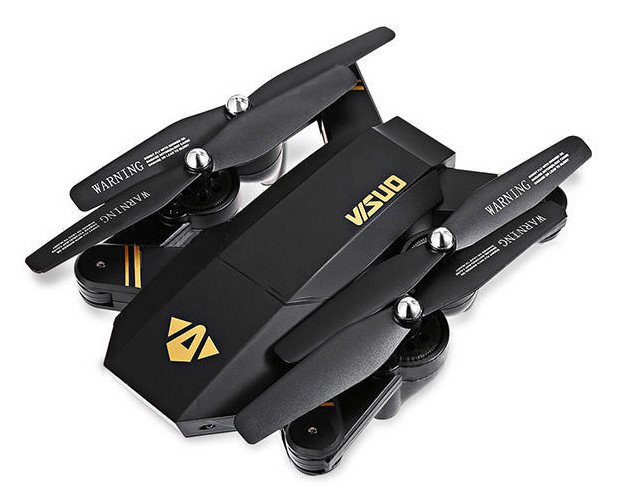 Foldable drones like the Visuo XS809HW are lightweight and compact which makes them easy to carry around and they make great travel drones because they are easy to pack ad they don’t take up too much space.

The Visuo XS809HW measures 32.5*32.5*6 cm when it is expanded, it’s a medium-sized drone and weighs just over 150g, this means if you live in countries like the USA, Canada or UK, you will not need to register the drone to fly it.

Drone laws are fluid at the moment, so do make sure to check what the rules and regulations are where you live before you start flying any kind of drone.

The drone comes with 4 brushed motors, as you would expect from such a cheap drone, they will need to be maintained on a regular basis, so bear that in mind if you do decide to purchase this drone.

One of the cool aspects of this drone is its LED lights that are situated underneath each rotor, they are big lights and look spectacular if you fly the drone at night time. The LED lights also serve another purpose and that is to indicate when your drone compass is fully calibrated.

The Visuo XS809HW is powered by 3.7v 900 mAh lipo battery, it’s a small modular battery that slips in neatly on the bottom of the drone. It provides the drone with a flight time of around 7-10 minutes which is standard with budget-friendly drones such as this one.

However, 7-10 minutes is not enough time to fully enjoy flying a drone, the good thing is that you get the option to purchase two or three extra batteries with the drone. I highly recommend one of these options because it will extend your flight time instead of having to wait an hour or so for the battery to recharge before you can fly again.

The drone remote controller is not the most aesthetically pleasing to the eyes but this is a cheap drone so you can expect something spectacular. It kind of reminds me of an ugly video games controller, it’s not too big and does feel comfortable in your hands. The buttons are easy to reach and are clearly identified and it has a small smartphone holder that flips out from the middle. 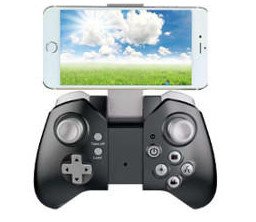 It’s powered by 3 AA batteries which are not included with the drone package.

To make use of the drones FPV feature, you will need to download the official app which is called XSW UFO and is compatible with both Android and iOS devices. It’s a decent app but has got some negative reviews for the Android version, the iOS version has a better rating. Having said that, the app is regularly updated, so the Android version will hopefully improve.

One of my favourite features of a drone is its camera, I do like seeing the world from above and taking aerial images.

Being a toy-drone, the Visuo XS809HW camera is not the best, but it still records in 720p and has 120° FOV that will allow you to capture more details in one shot. There is a micro SD card slot on the belly of the drone near where the battery is placed, this is where your video file and images will be stored.

Live video streaming is in standard 480p and although not the best quality, it is what you would expect from a drone at this price range.

The transmission range for FPV is around 40-50 meters depending upon the weather conditions and no interference with the signal. Again, it’s not a huge range but it is a toy drone and not really made for taking spectacular aerial images and videos.

Despite being a very cheap drone, it does come with some useful features that will make it more enjoyable to fly.

Altitude Hold – There is an earlier version of this drone that did not have altitude hold, however, the XS809HW does have altitude hold and this makes it hover with more accuracy and this will allow you to take better aerial images and video footage.

One-Button Return – The remote controller and app have a one-button return feature that is good for an emergency landing if you see the battery is running low.

3D Flips – The controller also has a button that will make the drone flip 360°, something that will impress kids.

The drone has a transmission range of around 80 meters, it fly’s well if you keep within this range. The drone is easy to fly and is comes with headless mode, you don’t need to know the orientation of the drone to fly it properly. The FPV feature is decent and it has 3-speed modes so you can test your flying skills as you get more experienced.

The Visuo XS809HW is a decent drone that is useful for absolute beginners to learn how to fly. It comes with an HD camera and some good features and it is fun to fly. If you are looking for a cheap beginner-friendly drone, the Visuo XW809HW is a good choice. Click on the button below for more information and its current price.