The Xiaomi Mi Drone 4K is one of the best cheap 4k drones on the market, it has a similar design to that of the DJI Phantom 4 and comes with many similar features. The main feature is its amazing 4K camera that is stabilised by an advanced 3-axis gimbal that will allow you to record crystal clear videos and images that will of professional quality. It comes with dual GPS which will provide the drone with accurate hovering capability and allow you to track the drone with pinpoint accuracy. The drone also comes with smart flight modes, automatic return to home feature and has a flight time of 27 minutes.

Hi and welcome to my review of the Xiaomi Mi drone 4k.

Xiaomi is a multinational electronics corporation but are not really known for their drones, however, they have released one of the best cheap 4k drones in the FIMI X8 SE, which is probably the best alternative to the DJI Mavic Pro.

4k drones are hugely popular but they can be a little too expensive for many people, fortunately, there are a lot more affordable choices and Xiaomi Mi drone 4k is one of them.

If you are in search of a good drone for photography but do not want to pay $1000 or more, the Xiaomi Mi drone 4k is worth considering.

As you shall see from this review, it is an awesome drone that comes with some amazing features and will you allow to take beautiful videos and photos.

The Xiaomi Mi drone 4k is a nice well-constructed drone, it sort of reminds me of the DJI Phantom range of drones, it has an all-white colour scheme, a pair of landing legs to help the drone land better and protect the camera and gimbal. 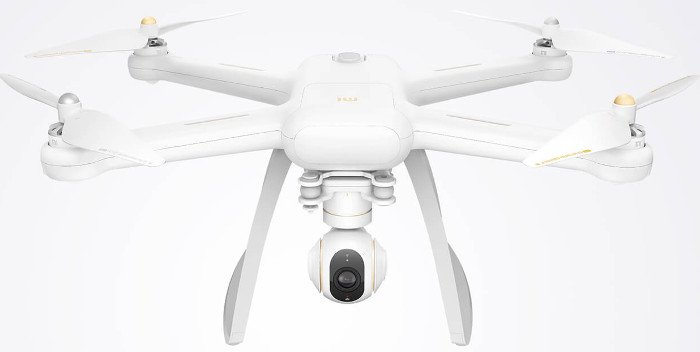 It’s not a very large drone but if you plan on travelling with this drone, I advise you to purchase a good drone backpack, one that can fit the drone and its accessories.

The drone weighs around 1.4kg, this includes the battery, which is quite heavy as well, so another reason you should buy a drone backpack.

The drones weight also means you will need to register this drone if you live in the UK, Canada or the USA, even if you plan on just using it for personal reasons. If you are going to be using it for commercial reasons, you will also need to get a drone license. For how to obtain a drone license check out this excellent article.

Most other countries do not require any kind of registration for your drone (regardless of its weight) if you just want to fly for fun. However, just to be safe, make sure to check out what the rules are wherever you live.

One aspect of this drone I like is that the landing legs are foldable, meaning, you do not have to screw them on. This also makes the drone slightly more compact and easier to pack away.

The drone also comes with easy to install propellers, these are large props that give drone better flight stability and allow it to reach faster speeds. The Xiaomi Mi drone 4k has powerful brushless motors, these are large motors that provide the drone with a powerful thrust during take-off and also one the reasons it can reach a top speed of 36 km/h, which is pretty fast for this type of drone.

Just some piece of advice regarding these motors or, try and clean them on a regular basis, this will help keep them in optimal conditions and will also help them last longer.

Like most modern drones, the Mi drone 4k has some cool LED lights underneath each rotor, these are bigger than usual and they make for a great spectacle if you fly this drone at night. Although I would advise only do this if you are an experienced drone pilot.

These lights also help to indicate when the drone compass is fully calibrated and also flash in certain ways when there is a problem with the drone, allowing you to find out what is wrong and fixing it quickly.

It has dual GPS capability, this means it can lock on to both GPS&GLONASS satellite systems for better flight stability, superior hovering accuracy and more accurate flight tracking on the app.

GPS also allows for the drone’s smart flight modes and safety features which I will get to later on in this review.

However, what happens if you want to fly in an area with a weak GPS signal? Even with the drones dual GPS system, this can still happen, however, you can still fly because the drone has ultrasonic sensors and an optical flow sensor that will allow the drone to maintain a steady altitude and fly smoothly. 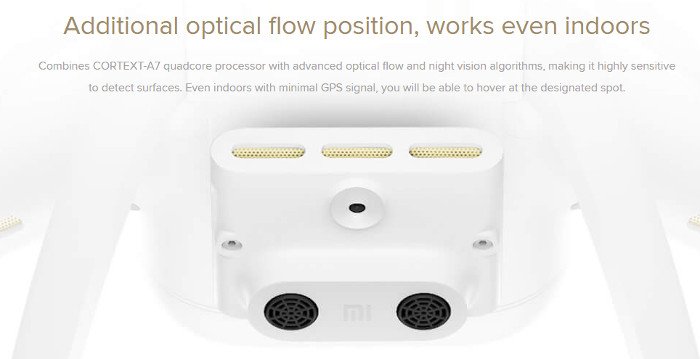 The drone is powered by 15.2v 5100 mAh LiPo intelligent battery, this one of the new modular batteries that provide a longer flight time. It has technology that prevents it from overheating and thus lasts longer, with this battery, the Mi drone 4k has a flight time of around 27 minutes, which is on the higher end of flight time for consumer drones.

As the battery takes a few hours to fully recharge, its recommended you purchase at least one more battery so that you can extend the flight time without having to wait for it to recharge.

The remote controller is well-designed and follows the aesthetics of the drone, its not too big and has minimalistic look, which I like. There are not a lot of buttons, mainly because the major features are accessed via the app, the buttons that are there are clearly labelled. 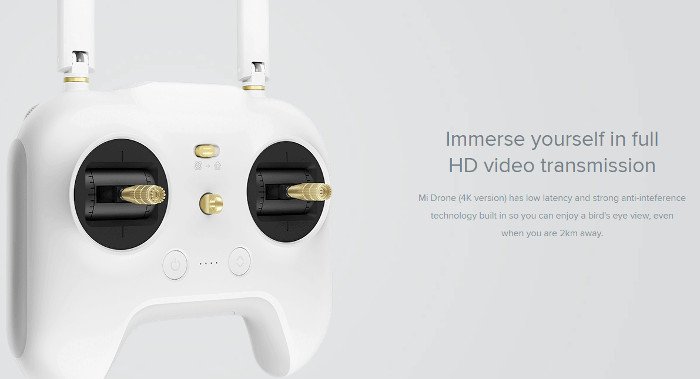 It has a couple of dials on the top that controls the gimbal and camera exposure and a couple of buttons on the back to take videos and photos.

The transmitter has a range of around 4km, which is pretty good and has an internal LiPo battery, so there is no need to purchase any batteries.

Now, to use the FPV feature and access the other features of this drone, you will need to download the official FIMI Navi app which is available on both the Google Play Store and the Apple App Store.

It’s a good app and has a pretty good rating on both app markets, it has a nice UI, which I always like and it is easy to use.

Now, to my favourite feature of this drone (an actually any drone for that matter), the main reason I enjoy flying drones is because of their cameras.

They allow you to experience the world from above which is always exciting, especially if you are a huge nature lover and enjoy taking images and videos of stunning landscapes and beautiful skylines.

You cannot take crystal clear distortion-free images and videos with every drone camera, but with the Xiaomi Mi drone 4k, you can.

This is a camera that will allow you to take professional-level videos and photos, videos can be recorded in 4k at 30fps, which is a pretty good frame rate and you can record slow-motion videos like the ones you see on YouTube.

As for still images, the camera will shoot them in 12mp and with a 1/2.3-inch CMOS sensor, the phots will be crystal clear.

The camera can rotate 360° to capture more detail in your videos and it is supported by an advanced 3-axis gimbal which will make sure that your videos and images are free from any kind of distortion.

There is a micro SD card slot of the back of the camera, it takes class 10 or above memory cards with a maximum capacity of 32gb. Of course, you can also stream live video footage to your smartphone, the video is transmitted in 720p resolution and with the transmitters anti-interference technology, you will hardly notice any lag or distortion in the video.

This is a great camera if you are looking for an affordable 4k drone, the Xiaomi Mi drone 4k is a good choice.

One of the best features of this drone is the ability to fly it autonomously, a lot of drones comes with intelligent flight modes but not all of them work as advertised. However, the smart flight modes that come with the Xiaomi Mi Drone 4k work well and are fun to use.

These smart flight modes include the following

Orbit – Here you can lock the drone on to a point of interest and it will orbit that position automatically.

Waypoint – This smart flight mode allows you to draw a flight path on the app and the drone will fly along the route and come back home.

Dronie – This is a pretty neat flight mode, especially useful for taking cool looking videos and photos. The drone will lock on to your position and fly away while to either take images or a video of you.

Tap fly – This is a lot like Waypoint but instead of drawing a flight path, you just tap anywhere on the map and the drone will fly there.

Automatic return to home – This is pretty much self-explanatory; this feature can be activated manually by either pressing the return to home button on the controller or the app. It is also activated automatically if you lose connection or if the battery gets low on charge.

As it comes with dual GPS, it has great accuracy as well, many cheaper drones have similar features but they will not land near where they took off, but with the Mi drone 4k, the accuracy of its return to home feature very good.

As you would expect from a Xiaomi product, the Mi drone 4k does exactly as advertised, the drone fly’s very well. It’s stable in the air thanks to it dual GPS and hovers accurately, you don’t need to be an experienced drone pilot to fly this drone, as long as you follow the instructions, it’s pretty easy to fly. The video quality is amazing, even when the drone is moving fast, you will not see any kind of jello effect or shakiness. Plus with the smart flight modes and return to home feature, anyone can pilot this drone.

If you are looking for a cheaper alternative to the like so the DJI Phantom 4 or any DJI drone for that matter, the Xiaomi Mi drone 4k is a good alternative. It is a fantastic drone with some amazing features and an exceptional 4k camera that is capable of professional photography. Click on the button below to find out more and check its price.