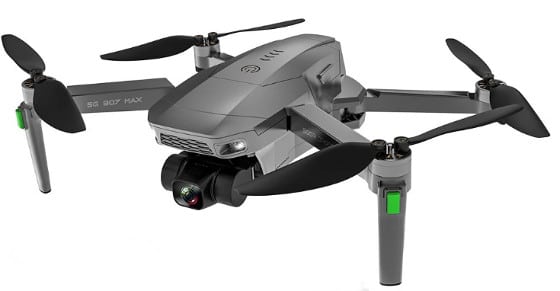 The ZLL SG907 Max is a small foldable lightweight drone that comes with an HD camera, dual GNSS module, optical flow sensor and intelligent flight modes. The drone is suitable for beginners and is fun to fly. It has a flight time of around 22 minutes and a control range of 1km, it fly’s well and is easy to control.

Are you looking for a cheap GPS drone with some good features and a decent camera? The ZLL SG907 Max drone might be the drone for you. In this review of the SG907 Max drone, you will find out the features it comes with, how it performs and who it’s suitable for.

ZLL have released some decent drones at affordable prices, I have reviewed a couple of their drones on this site and on the whole, they are worth their price. The SG907 Max is the successor to the very popular SG906 Pro 2.

Something I must add before I continue with this review is that, whichever type of drone you purchase, if it’s the SG907 Max or some other drone, follow the rules and regulations of the country you are living in. Don’t give drone enthusiasts a bad name by being a nuisance, fly responsibly and register the drone if it is required (this one will need to be registered if you live in the UK or USA).

Like most popular drones, the SG907 Max is a drone that has a foldable design, making it easy to carry around and travel with. 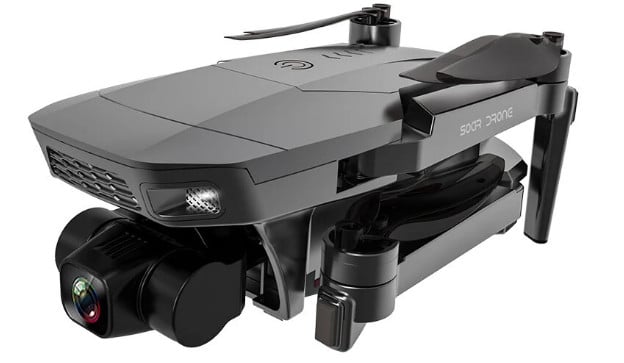 As an added bonus, you get a nice shoulder strap bag that has a premium feel to it which you will be able to use to carry the drone around with you.

The drone looks very nice and has a modern look about it, it’s all black and has cool LED lights on the front and on the end of each rotor arm. It has powerful brushless motors, which is a very good feature for a drone that costs less than $200. These motors will help with the drone’s flight performance and allow it to remain relatively stable even if it’s a little windy.

The drone comes with a dual GNSS module and an optical flow sensor, the GNSS module connects with the GPS and GLONASS satellite systems. This gives you better satellite coverage and will allow you to track the drone on your smartphone and fly the drone hands-free via its intelligent flight modes.

The optical flow sensor will allow you to fly the drone in areas that have a weak GPS signal, so you could fly it indoors, however, it is a medium-sized drone, so the area room would have to be big and free of obstacles.

The drone weighs just over 300g, which isn’t very heavy, but it does mean that you will be required to register the drone if you live in the UK or the USA. The drone laws in the UK requires you to register any that weighs over 250g with the CAA and a similar rule applies in the USA as well.

The official flight time for the SG907 Max is 25 minutes, which you may get if you just hover in one place, you can probably get around 20-23 minutes in good weather, which is still very good for a drone under $200.

It’s powered by a lithium polymer battery and if you want to extend the flight time, there is an option the purchase one or two extra batteries, which I do recommend.

There is also a memory card slot on the side of the drone, if you want to record videos and photos at the best possible resolution, you should record them on a micro SD card. Unfortunately, you do not get one with the drone package, so you will need to purchase one separately. The maximum capacity it can take is 16GB, however, something you will have to be aware of is that the writer of the memory card slot does not work with every 16GB card.

You may have to test a few cheap cards out to see which one works, however, people have recommended the Mixza Tohaoll 16GB card, which costs just under $7.

The drone uses a similar controller to the SG906 Pro 2, it’s a small controller that has a pair of handles that fold out from the bottom, this provides a better grip and has a smartphone attachment on top.

It’s powered by an internal battery that provides around 5 hours of use before it needs recharging. One of the best features is the small screen in the middle that displays data about the drones height, distance, battery level and GPS signal.

To access the drones FPV and intelligent flight modes, you will need to download the Xil Pro app. This is a rebranded version of the HFunn app which is used for the SG906 drone.

It has a nice user interface and is simple to use and is compatible with devices running on iOS 12 or android 5.0. Something to note is that the live video feed is transmitted via 5G WiFi, so you will need a smartphone that is compatible with this frequency range.

Now, despite what you will read on the product description page, this drone cannot record videos in 4K, it does capture images in 4K, which is of decent quality, but videos are recorded in HD.

The camera is stabilised by a 3-axis gimbal, which is another good feature for a cheap drone, and you can adjust the camera angle via the remote controller. To capture the highest resolution for videos and photos, you will need a memory card, otherwise, you will have to record it on your smartphone, which isn’t as good.

There is a zoom function on the app, which allows you to zoom into your subject matter by up to 50 times, but its really a gimmick and the footage just gets grainer each time you zoom in.

I have seen better video footage and image quality and similarly priced drones, but for under $200, it’s not too bad.

It is has become common now with cheap GPS drones to come with some advanced features and the SG907 Max is no different.

The drone has two-speed modes that you can switch between via the remote controller, and it has a gesture control mode that will allow you to capture photos and videos through simple hand gesture. This feature only works when the drone is in close proximity to you and it doesn’t always work but it is fun to use when it does work.

There is also the intelligent flight modes that I mentioned near the beginning of this article, these modes will allow you to fly the drone hands-free, however, you should only use them I clear open spaces and they only work with a strong GPS signal.

The intelligent flight modes include the following:

Follow me – Locks on to your smartphone and follows you from behind.

Orbit – Similar to the follow me mode, however, this time the drone will orbit you.

Waypoint – This mode allows you to draw a flight path and the drone automatically fly’s along it.

The drone also comes with an automatic return to home feature that is activated when the battery gets low on power or if the connection between the drone and controller is lost.

You can also fly this drone via the app, although, the range is really limited.

I don’t think you would be disappointed in how this drone performs, it’s stable and fly’s well and even hovers accurately. The range is decent, I don’t know if it can go as far out as 1.2km, but from previous experience, I don’t it can but as most drone laws require you to keep the drone well within your line of sight, you will not be able to fly it that far out. The video and photo quality is not the best, especially when recorded on a smartphone but it is way better if you use a memory card. As for the intelligent flight modes and gesture control modes, they do work as advertised.

This is a decent drone for under $200, it comes with some cool features and is fun to fly. I think there are better options like the MJX B20 EIS or the MJX B7, click here to see more options for drones under $200.

If you want more options and looking for a drone that is suitable for beginners, click on the button below.