Drone technology has revolutionised the world of video production, giving filmmakers access to breathtaking aerial footage that was previously attainable through helicopters and low-flying aeroplanes. Drastically reducing costs and increasing safety, drones now make it possible for filmmakers to capture stunning visuals from various altitudes and angles without sacrificing quality or clarity. With their superior mobility over traditional methods of capturing aerial video footage, there is no question as to why drones have become so popular among modern creators today. Whether you’re a professional videographer or a hobbyist, drones can be a powerful tool for capturing stunning, high-quality video footage, and in this article, we shall explore the five best drones for videos on the market today.

How Are Drone Videos Used?

Drone video footage can be used in a variety of ways, including:

Real estate: Drone footage can give potential buyers an aerial view of a property, highlighting its features and location.

News reporting: Drone footage can be used to provide a bird’s-eye view of a news event, allowing viewers to see the situation from a different perspective.

Recreational use: Hobbyists can use drone footage to capture aerial shots for personal enjoyment.

There are multiple other uses like; for example, emergency services might use drone videos for surveillance and search and rescue operations. Agencies like FEMA will use drone video footage to assess the aftermath of a natural disaster and are also being used as an added layer of security for high-value assets.

If you reside in the USA and are recording drone footage for commercial purposes, you must obtain the FAA Part 107 certificate.

The Part 107 certificate demonstrates that the pilot understands the rules and regulations for operating a drone safely and responsibly. This includes knowledge of airspace rules, weather conditions, and the drone’s capabilities and limitations.

It compromises 60 multiple-choice questions, and candidates will need at least 70% to pass and obtain the certificate.

The FAA provides free training material to candidates so that they know what kind of topics will be in the exam. However, if you want to improve your chances of passing the first time, several training programs guarantee success. One of the most popular is the Part 107 training course from Pilot Institute, which has a 99% success rate with its students and has a money-back guarantee if you do not pass the test. 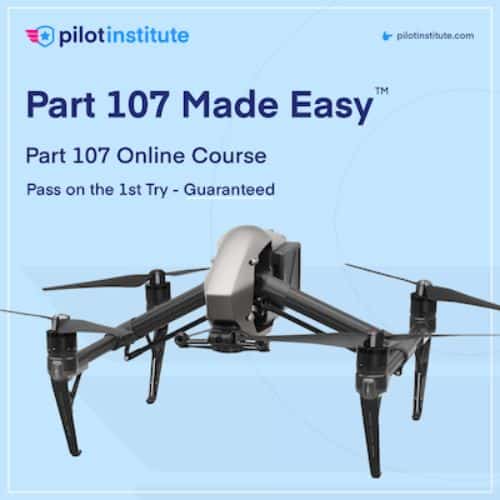 The DJI Mavic 3 Cine is a high-end consumer drone that is designed for professional videographers and photographers. It is part of the DJI Mavic series, which is known for its portable size and powerful features.

The Mavic 3 Cine can encode videos in multiple formats, including Apple ProRes & H.265 and has a maximum recording rate of 200Mbps. The camera is capable of recording amazing time-lase videos and ultra-HD slow-motion videos.

The Mavic 3 Cine also has a secondary zoom or telephoto camera that can be used for scouting as well as capturing 12MP photos and 4k videos without having to get close to the subject matter.

In terms of performance, the DJI Mavic 3 Cine holds up well in windy conditions, has a flight time of 46 minutes and a transmission range of 15km thanks to the latest advancement with DJI’s OcuSync technology. The Mavic 3 Cine is also equipped with a range of advanced features and technologies, including 360-degree obstacle avoidance, ActiveTrack (which allows the drone to follow a subject), and the most advanced automatic return-to-home feature. 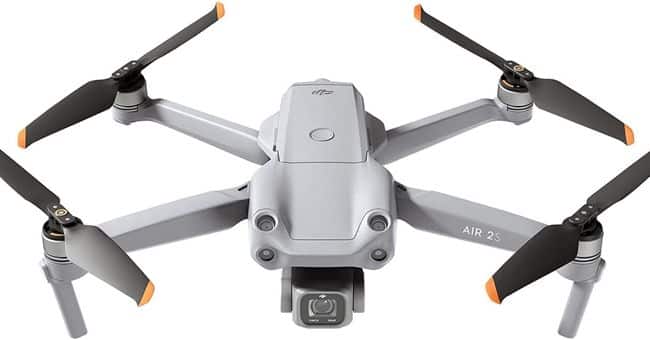 The DJI Air 2S is a high-quality drone well-suited for video production. It has several features that make it particularly useful for capturing footage from the air.

The Air 2S is equipped with a camera that has a 1-inch CMOS sensor and is capable of capturing 5.4K video at 30 frames per second, 4k at 60fps and 1080p at 120fps. The camera can also record videos in 10-bit Dlog and captures fantastic images in 20MP. The Air 2S has advanced image processing capabilities, including HDR video and advanced colour processing, that help to produce high-quality footage with vibrant colours and a high dynamic range.

The drone also comes with autonomous video recording modes such as hyperlaspe that allow users to record stunning time-lapse videos and Mastershots and Quickshots for short cinematic videos.

With a flight time of up to 31 minutes, the Air 2S allows plenty of time to capture footage from various angles and perspectives. The drone also comes with DJI’s OcuSync 3.0 technology, which allows for a transmission range of 12km.

Overall, the DJI Air 2S is a high-quality drone that is well-suited for video production. Its advanced camera, long flight time, stable flight, and advanced image processing capabilities make it an excellent choice for professionals looking to capture high-quality footage from the air. 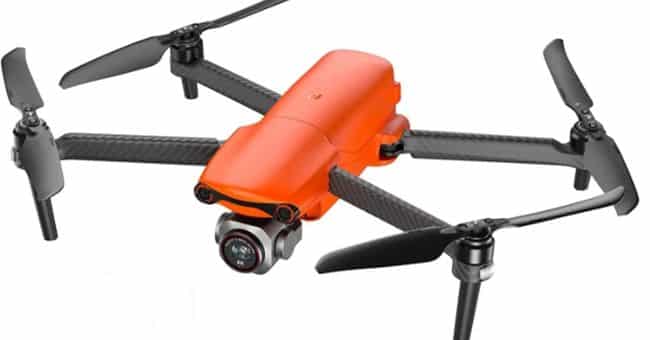 The Autel Evo 2 Pro is one of the most sought-after drones for professional video production. It packs some serious features that make it stand out from other drones on the market, making it one of the best choices for filmmakers and videographers.

You can see why the Autel Evo 2 Pro is one of the top drones for aerial videography. Its 1-inch Sony sensor can record 6k video footage and captures stunningly sharp 20MP photos. The camera can also record videos in HDR thanks to its 10-bit colour profile and comes with Autels Moonlight technology for photography in low-light environments. The 3-axis gimbal offers smooth footage even in windy or bumpy conditions. The drone is equipped with Autels latest SkyLink transmission technology for a maximum range of 15km.

The Autel Evo 2 Pro also offers one of the most extended flight times in its class, with a battery lasting up to 40 minutes on one charge. It also comes with several safety features. The drone boasts an omnidirectional obstacle avoidance system and return-to-home technology for added security in emergency or signal loss.

For professional filmmakers looking for one of the best drones for video production, the Autel Evo 2 Pro is one of the most reliable choices available. Its combination of a 6k resolution camera, gimbal stabilisation system, long flight time, and advanced safety features bring a new level of quality and performance to aerial cinematography projects. 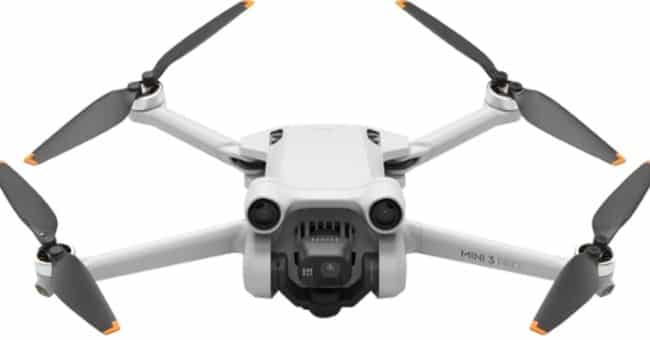 The DJI Mini 3 Pro is a lightweight drone designed to capture high-quality video footage. It has several features that make it well-suited for this purpose.

The Mini 3 Pro is equipped with a professional-grade camera capable of capturing detailed, high-resolution video. The camera has a 1/1.3-inch image sensor with a fixed aperture of f/1.7 and 82.1 degrees FOV. The drone can record amazing video footage in 4k at 60fps and capture 48MP still photos.

The Mini 3 Pro’s camera is mounted on a 3-axis gimbal, which helps to stabilise the footage and eliminate camera shake. This is especially useful when flying in windy conditions or capturing fast-moving objects. A unique feature of this gimbal is that it allows creators to capture true vertical videos and images.

The Mini 3 Pro’s OcuSync 3.0 technology allows it to transmit video in high definition over a long range, up to 12km. This makes it possible to capture video from a distance and still maintain a clear, stable connection.

The drone has many innovative features that make it easy to capture excellent video footage. For example, it has ActiveTrack and Point of Interest, which allows you to select a subject and have the drone follow it automatically or orbit around it. The Mini 3 Pro also comes with intelligent video recording modes called QuickShots and MasterShots, which are pre-programmed flight modes that can be used to create short cinematic videos.

Overall, the DJI Mini 3 Pro is a versatile and capable drone that is well-suited for capturing high-quality video footage. Its compact size, long-range transmission, and intelligent features make it an excellent choice for various video projects. 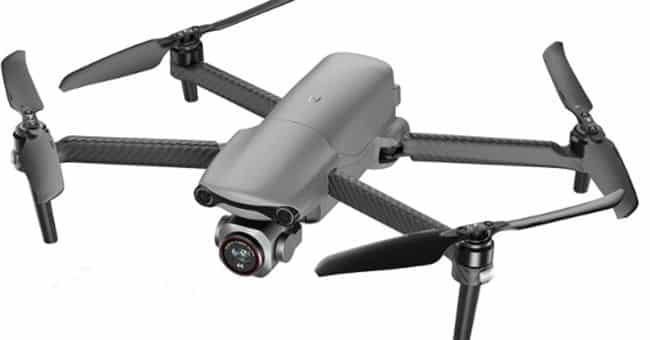 The Autel Evo Lite Plus drone is a high-end consumer drone that has been developed for professional aerial photography and videography. It has a number of features that make it well-suited for video production, including a 4K camera with a 1-inch CMOS sensor, an RYYB filter that absorbs more light, a 3-axis gimbal for stable footage, and a variety of shooting modes for both videos and photos.

One of the standout features of the Evo Lite Plus is its long flight time. It can fly for up to 40 minutes on a single battery charge, giving you plenty of time to capture stunning aerial videos. It also has a long transmission range of up to 12km, allowing you to fly the drone further away from your location and maintain a strong connection.

In addition to its advanced camera and flight capabilities, the Evo Lite Plus is also equipped with a range of intelligent flight modes that can help you capture professional-quality footage. These include ActiveTrack, which allows you to follow a subject while keeping the camera pointed at them, and Point of Interest, which will enable you to orbit a subject while holding the camera focused on them.

Overall, the Autel Evo 2 Pro is a powerful and versatile drone that is well-suited for video production. Its advanced camera and flight capabilities, along with a range of intelligent flight modes, make it an excellent tool for capturing high-quality aerial footage.