The Contixo F30 is a small compact foldable drone that is suitable for beginners, it’s easy to fly and comes with some decent features. The drone weighs less than 250g, so no need for registration with the FAA, and its size and weight make it a good drone to travel with. It comes with a 4k camera, a flight time of 15 minutes, a dual GPS module, and autonomous flight modes including an automatic return to home whenever the battery gets low on power.

n this article, I will review the Contixo F30 mini foldable drone that comes with several advanced features such as GPS and a 4K camera.

Having taken a thorough look at this drone’s design and specs, I think it is a rebranded version of the MJX B7 drone, which I have reviewed here.

Contixo is an electronics company that is based in California, USA and their brand of low-cost drone with many coming with premium features have proven to be very popular, especially on the Amazon marketplace.

The Contixo F30 is one of their more expensive drones and comes with some nice features such as the 4k camera, autonomous flight modes, dual GPS module, and a decent flight time.

It’s a good drone for beginners who want a relatively cheap drone but one that allows you to capture some good video and photos.

So, the Contixo F30 is a small foldable, and very compact drone, it can easily fit in the palm of your hands in its folded form and weighs just under 250g. This means that you will not need to register the drone with the FAA, but since drone laws are kind of fluid, please still check what the rules are wherever you live. 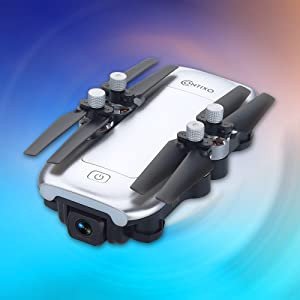 I do like the overall look and design of this drone, it has a cool silver colour scheme and an LED light at the front that flashes in certain colours when it enters certain modes. For example, during flight, the light will stay green but as soon as the battery starts to get low on charge it starts to flash red.

The LED lights also indicate when the compass calibration is complete and flashes in different colours when there is an issue that needs to be resolved. Also, if you fly this drone indoors in the dark, it does look pretty cool with the LED zipping around the room.

The drone has a dual GNSS receiver, it can connect with both GPS and GLONASS satellite systems for better flight stability, more accurate drone tracking and for the drone’s autonomous flight modes. It also has an optical flow sensor that will allow you to operate the drone in areas with a weak GPS signal, so you can fly this drone indoors.

Another powerful feature is the drone’s motors, they are brushless and so they provide more power and efficiency during flight and keep the drone stable when hovering. They also require less maintenance than brushed motors and last longer.

Something I want to mention is that you get a 32GB memory card which is a pleasant surprise as usually you would have had to purchase one separately. As the drone comes with a decent 4k camera, you will need a memory card to record video footage in the best resolution. You can record videos and photos on your smartphone but it will be done over WiFi but the end product is not always the best.

There is also a lunch boxed shaped carry case to store the drone away and will come in handy if you plan on traveling with the drone.

You also get a cool battery charging hub that will allow you to charge two batteries simultaneously so that you can extend your flight time without having to wait for one battery to fully charge before being able to fly again.

Talking of the battery, the drone is powered by a 7.6v 1500 mAh lithium polymer battery that provides it with a flight time of around 15 minutes. This is a decent flight time for a drone that costs less than $200, however, I have seen drones at a similar price range with a flight time. The good thing is, you get an extra battery with the drone package which is always an added bonus instead of having to purchase one separately.

One final point I want to mention is regarding the drone’s remote controller, this is the same controller as many other Contixo and MJX drones, its small and has a nice LCD screen that displays vital telemetry data about the drone. 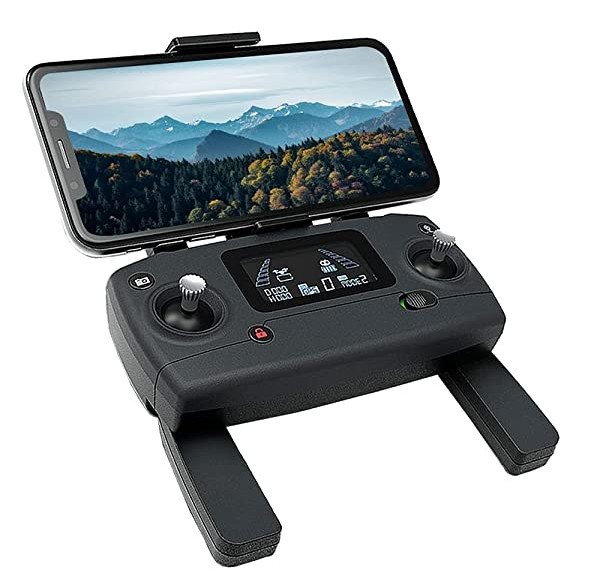 There is a smartphone holder that pulls out from the top on which you can attach a decently sized smartphone. There are buttons for take-off/landing, automatic return home, and for taking videos/photos.

You will need to install the M RC PRO App to use the drones FPV feature and intelligent flight modes. This is an app from MJX and is compatible with smartphones that are running Android 5.0 or later and iOS 9.0 or later. It’s a relatively easy app to use and has a good rating on both app stores. 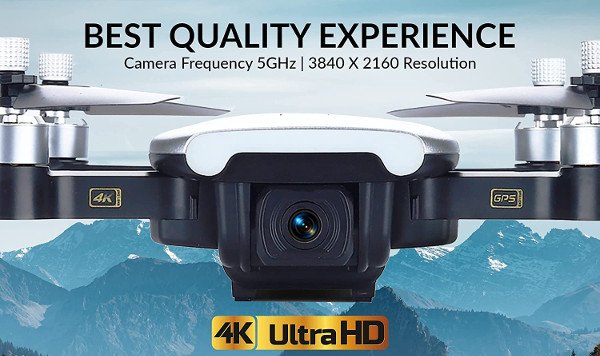 One of the main features of any consumer drones and the reason why they are so popular now is because of their cameras.

Despite being a relatively cheap GPS drone, the Contixo F30 does comes with a decent HD camera. You will not win any awards with this camera and it is not supposed to be for professional use, however, you can record pretty good video footage and capture some good quality images. It does record in 4k at 16fps and 2.7k at 25fps, not the greatest frame rates but when recorded on a good memory card, the footage is surprisingly smooth. However, if you decide to record the footage on your smartphone the resolution will only be in 720p at 20fps.

The camera can capture images in 8MP but only in JPEG format but still, the quality is pretty good for a drone in this price range.

The control range for FPV is around 400 meters, so if you keep well within this range and fly in good weather, your videos should be of good quality.

One thing to note is that you will need to format the memory card to FAT32 so that it records your media files properly.

Like a lot of cheap drones that are equipped with a GPS receiver, the Contixo F30 comes with 3 intelligent flight modes. They only work in areas with a strong GPS signal, and they are fun to use and make it easier to shoot videos and capture images. The intelligent flight modes include follow me, orbit, and waypoint, the first two are more or less self-explanatory. In the follow me mode, the drone locks on to your smartphone and follows you from behind. While in orbit mode, it circles you on auto-pilot.

Waypoint mode allows you to draw a flight path on the app and the drone fly’s along it autonomously.

The drone also has a safety feature called automatic return to home, this is activated whenever the drone goes out of range or if the battery gets low on charge. It reduces the risk of losing the drone in mid-flight.

The overall flight performance of the Contixo F30 drone is good, it does what it says on the box and it is easy to operate. It has multiple speed modes that will allow you to test your flying skills as get more experienced as it is a small drone, I would advise against flying it in any kind of windy conditions. The live FPV feed works, and the quality is good as long as you don’t fly in harsh weather and there are no obstructions between you and the drone. You should definitely use the memory card that is provided to record your videos and photos, as the quality is much better than recording over WiFi on your smartphone. Overall, a good drone and worth its price.

This is a decent drone that comes with some advanced features and is fun to fly. The camera is the best feature and it can record in 4k and 2.7k, it’s not the greatest quality but for its price, it’s good enough. If you want alternatives at a similar price point, check out this article for the best drones under $200, otherwise click on the button below to check its current price and find out more about it.