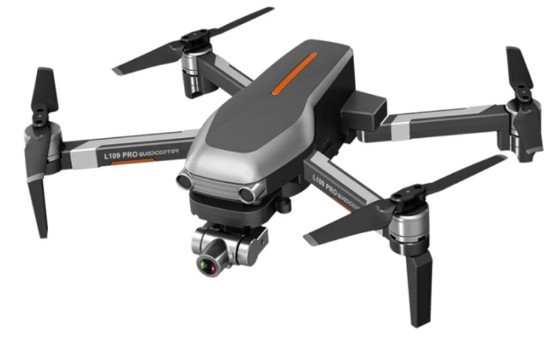 The L109 Pro is a cheap GPS drone that comes with some cool features that include an HD camera, an optical flow sensor and intelligent flight modes. This is a good drone for beginners as it is easy to fly and comes with a decent HD camera that has FPV capability and can record video footage in 1080p resolution. The drone has a flight time of around 18 minutes and a transmission range of 1km.

Hi and welcome to this review of the L109 Pro GPS drone, this drone is an updated version of the L109 which is also known as the Matavish 3 foldable drone.

Drones are fun to fly, especially ones that come with a decent camera and the good thing is that there are a lot of low-cost drones to choose from.

The L109 Pro is one of these low-cost drones that comes with some decent features including an HD camera.

However, there are some exaggerated claims on its product page that you have to be aware of, for example, it insinuates that this drone comes with a proper 4K camera and is suitable for professional drone photography, both of which are not true.

Unfortunately, a lot of companies that make low-cost drones make these exaggerated claims, which is unfortunate because no-one is really expecting to purchase a professional camera drone at cheap prices.

If you can look past the claims made on the product page, then the L109 Pro GPS drone is pretty decent for its price.

So, the L109 Pro drone is very similar in design to its predecessor, it’s a foldable drone, which is probably the most popular type of consumer drone because of their lightweight and ultra-portable build.

Being a foldable drone, the L109 Pro is easy to carry around, this also makes it a good drone to travel with. 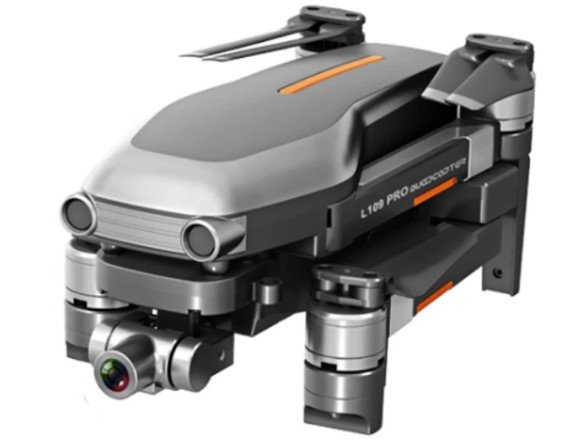 It’s not a very large drone and is quite light as well, it weighs just under 350g, however, even though it is a lightweight drone, as it weighs over 250g, you will need to register the drone if you live in the UK, Canada or the USA.

Most other countries do not require you to register a drone, regardless of its weight, if you are planning on just flying for fun. However, I still advise you to check what the rules are wherever you live just to make sure that you are complying with the law.

This drone is installed with brushless motors and for a drone that costs less than $200, this is a pretty advanced feature. Usually, drones that are priced around the $100-$200 mark come with the inferior brushed motors.

Brushless motors are more powerful and efficient than brushed motors and this allows them to be flown in slightly windy conditions, drones hover more accurately and they fly faster with brushless motors.

There is a dual GPS module inside the drone, this will allow the drone to connect with more satellites which will give you better flight positioning data on the app. The GPS system also allows for the drone’s automatic return to home feature and intelligent flight modes.

The drone also has an optical flow sensor on its belly, which means you can fly it in areas where there is no GPS signal. So, you can fly this indoors, but I only advise this if the room is large and spacious as this isn’t a mini drone that can be flown in small rooms. 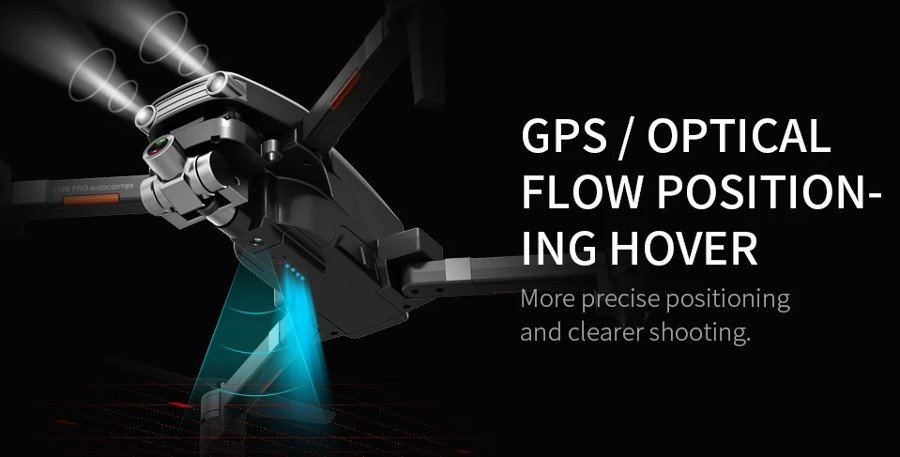 The drone is advertised as having a flight time of 25 minutes, this is not true and is another example of a drone company exaggerating the capability of a drone. In good weather conditions, you can get around 18 minutes, which is still pretty good for a drone that costs less than $200, so why they feel the need to exaggerate is baffling.

The drone is powered by an 11.1v 1600 mAh lithium polymer battery, this is a modular battery that fits on the bottom of the drone and takes a few hours to fully recharge. For this reason, I always advise people to purchase a couple of extra batteries to extend their flight time without having to wait for the battery to fully recharge.

Fortunately, you do get the option to purchase the L109 Pro drone with 2 or 3 batteries, which I suggest you do.

It has a nice remote controller, it has a minimalistic design and there are a couple of handles that fold out from the bottom to give you a better grip (although I don’t think it’s necessary). It has a smartphone holder the pulls out from the middle which can hold a large smartphone but not a tablet.

All the controls are clearly labelled, and it has a large LCD screen in the middle that will display telemetry details about the drone. You don’t need to purchase any extra batteries for this drone as it is powered by an internal lithium polymer battery.

It has an overall control range of around 1.2km and a video transmission range of 800 meters.

As the video feed is transmitted over 5G WiFi technology, you will need a smartphone that also has 5G technology, otherwise, you will not be able to enjoy the FPV features of this drone.

The drone app is called the RC GPS and it is available on both Google and Apple App stores. It’s a decent app that gives you access to the drones FPV features and intelligent flight modes. However, it does seem to have issues, especially if your smartphone is running on an older version of iOs or Android operating systems.

However, if you have a relatively new smartphone it should work without any issues.

By the way, if you want options for drones that cost less than $200, click on the button below, one of my favourites that list is the MJX B20 EIS drone. 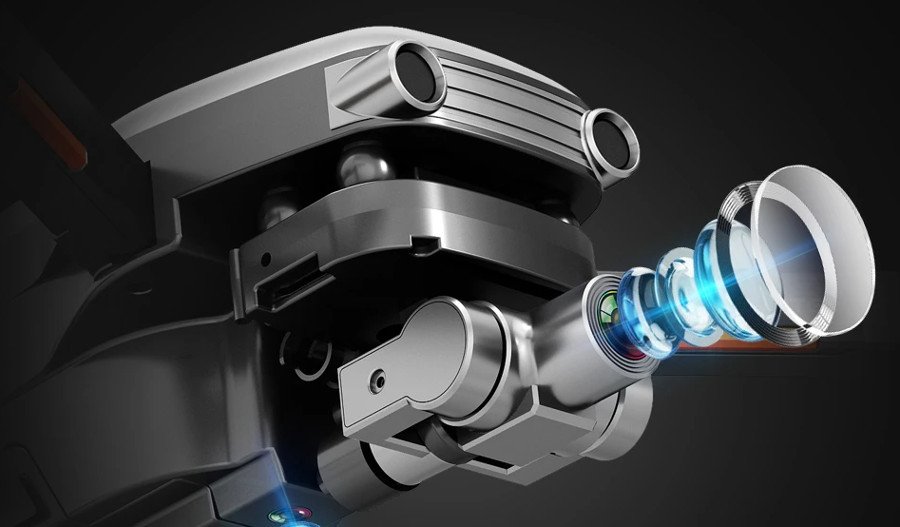 One of the main features of any drone the camera and this is the main reason for their huge rise in popularity.

As I mentioned at the start of this article, the camera on this drone is a little exaggerated, it is not a true 4K camera and it cannot take professional-quality videos or photos.

I don’t think anyone is expecting to purchase a professional camera drone for less than $200, so I don’t know why they exaggerate the capability of drone’s camera on their product description page.

Having said that, for under $200, this is a pretty decent camera, its stabilised by a 2-axis gimbal which means that shakiness and jello effect will be reduced and so your videos will be clearer.

Images are captured in 1080p but interpolated by the app to 4K, they are of decent quality, especially for a cheap drone.

Video footage is recorded in HD quality at 25fps, the quality is pretty good for this type of drone, although even with a gimbal you will notice some distortion, however, for its price, I think the quality is alright.

The camera has a micro SD card slot, so if you want to record in the best video resolution, you will need to record on a micro SD card. Unfortunately, you don’t get one with the drone package, so you will have to purchase one separately.

The live video feed is pretty good quality, although the official range for video transmission is 800 meters, it’s more around the 400-meter mark.

Despite being a relatively cheap drone, it does come with some advanced features that will make it more enjoyable to fly. These include smart flight modes in which you can operate the drone totally hands-free, allowing you to concentrate on taking better videos and photos.

These flight modes include:

Orbit mode – The drone will orbit a point of interest

Tap fly mode – This mode allows you to draw a flight path on the app and the drone automatically fly’s along that route.

As well as the above flight modes, the drone also comes with gesture control mode which will allow you to capture videos and photos through hand gesture. It also comes with an automatic return to home feature that is activated whenever the drone gets low on battery or if you lose connection. This is a great feature that will reduce the risk of losing your drone.

The drone also has three-speed modes, so you can test out your flying skills as you become more an experienced flyer.

Flying this drone is pretty easy to fly, the default flight mode is the headless mode which is great for beginners as you don’t have to worry about the orientation of the drone. Most of the features work as they should, although you may sometimes have some issues with smart flight modes and FPV as the app sometimes freezes up. Flight time is around 18 minutes, which is less than what is advertised but still good for a cheap drone.

There are a lot of cheap GPS enabled drones and the L109 Pro is one of the better ones on the market. If you can get past the hyped-up claims on its product description pages, then this is a pretty good drone at a reasonable price. However, if you would like more options for drones under $200, click here.