The Visuo Zen K1 is a good all-round drone that comes with a HD camera that can shoot videos in 2K and take images in 4K. It also has a 720p camera on its belly that allows you to have dual screens on your smartphone. It comes with dual GPS, optical flow sensor and 28 minutes flight time. It’s a foldable drone which makes it great for people who travel a lot as it is easy to carry around and its advanced features make it easy to fly so it is suitable for both beginners and advanced drone pilots.

As regular readers of my blog will know that I am a huge fan of HD camera drones, cameras are one of the main reasons I love flying drones, you get to see the world from above and experience places you may not have without a drone. Drones with HD cameras let you see the world with stunning clarity, a few years back, HD camera drones would have cost you an arm and a leg ( ok I’m kind of exaggerating, but they were expensive).

However, with increased consumer demands and a growing number of drone manufacturers, the cost of HD camera drones has been reduced and now you can purchase one for less than $300. 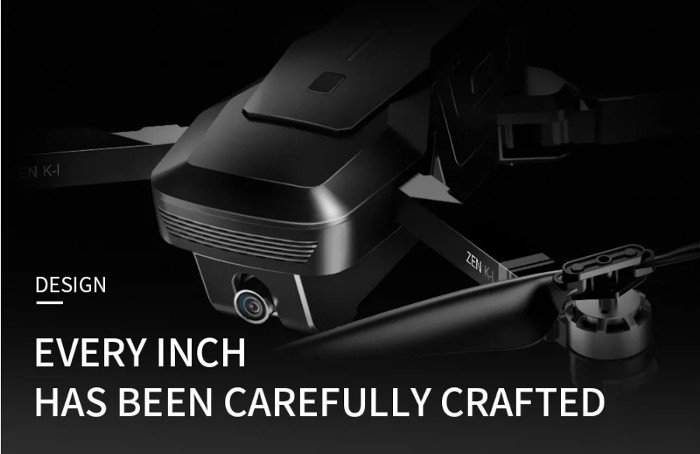 One of the first things you will notice about the Visuo Zen K1 drone is how similar it looks to the DJI Mavic Pro. I don’t think this is a coincidence, DJI are the industry leaders in consumer drones and the Mavic is one of their most popular drones and made even more popular with its innovative foldable design.

This popularity has led to many drone manufacturers copying the foldable design, some have been good while others not so much. The Visuo is in the first category, it’s built from highly durable plastic which means it can take the occasional bumps and not get seriously damaged and despite its price, it doesn’t feel cheap.

When fully extended, it measures 28*23.5*7 cm and weighs just under half a kilogram with its battery installed. In its folded form it measures just 11*17*7 cm which makes it compact and easy to carry around. This is why foldable drones like the Visuo Zen K1 are so popular with adventurers and frequent travellers, you can take them anywhere with you without needing a massive carry case. 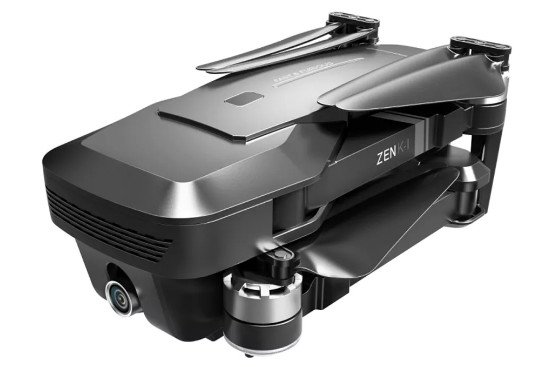 Like most drones, the Visuo Zen K1 has colourful LED lights on it’s of its 4 rotors, these LED lights provide a brilliant visual when you fly during the night.

The drone comes with the modern brushless motors which provides it with more thrust and hence the drone is able to fly faster. Speaking of speed, the drone has three-speed modes, it’s a pretty fast drone even on its slowest mode, so if you are a beginner, I would not recommend flying on the fastest mode as it will be difficult to control.

The drones remote controller is not as aesthetically appealing as the drone itself but it does look decent and it has a nice ergonomic design and feels comfortable in your hands. It has a range of around 500 meters which is very good for a drone that costs less than $200.

It has a smartphone holder that springs up from the middle and a small LCD screen that provides important drone data. The controller takes three AA batteries which are not included with the drone package.

The drone can also be controlled via the FPV GO app, the app is compatible with both Andriod and iOS and most of the drone features can be accessed via this app.

The last thing I want to mention before I get to the main features of this drone is the battery. The Visuo Zen K1 takes one lithium-ion battery that has a 2500 mAh capacity which is able to provide an official flight time of 30 minutes.

30 minutes of flight time for a drone is amazing, especially one that costs less than $200, however, you should expect a flight time of something between 26-28 minutes because official flight times are nearly always overstated. Although this is still pretty good flight time, I always advise people to purchase extra batteries so that they can fly for longer, there are options to buy the Visuo Zen K1 with an extra two or three batteries which I highly recommend you take instead of having to purchase some later on. 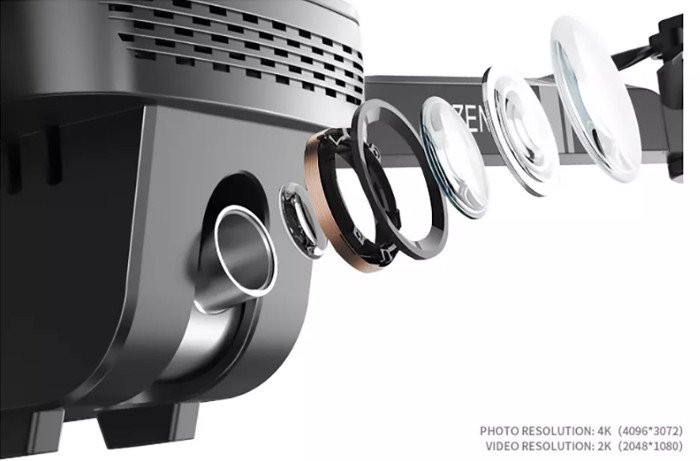 So, the main feature of this drone is the HD camera with which you will be able to take some stunning aerial images and video footage. It can shoot video footage in 2K and take aerial images in FHD 4K, it’s an exceptional drone camera especially for the price it currently sells for.

It has a 120° wide-angle lens and you can adjust the angle of the drone up or down via the remote controller. It also comes with 5G technology which will allow you to stream pretty decent video footage, however, you should be aware that the further out the drone goes, the more lag there is, and the video quality is also affected in a negative way.

Although it has no advanced gimbal, it does come with an electronic stabilisation feature within the app. This will help reduce any major distortions in your images and videos and eliminate any kind of jello effect when recording moving objects.

There is also a 720p camera on the belly of the drone, you can switch between cameras depending on where you are and what you want to record.

It also has zooming option, you can zoom in to your subject matter up to 50 times, however, this isn’t actually a feature of the camera but within the drone app and so the actual image and video quality suffers if you zoom in too much.

Like most technologically advanced drones, the Visuo Zen K1 comes with three intelligent flight modes that will allow you to fly this drone hands free and give you more time to concentrate on taking better videos and aerial images.

The following are the intelligent flight modes that come with this drone;

Tracking – Easily lock the drone on yourself and the drone will follow you and you can record yourself at the same time. This is a great flight mode for people who go for long walks or like to hike frequently.

Point of Interest – Select a point on the drone app and the drone will orbit that position at a height and radius of your choosing. A great way to take selfies!!

Waypoint – Draw a path on the app and the drone will follow that route and come back to its original position.

There is also a gesture control mode that is mainly for taking video and images, this mode only works if you are in close proximity to the drone, it’s a great feature that will definitely impress your family and friends.

The drone comes with several other impressive features, these include the following;

Optical Flow Sensor – This will keep the drone at a steady height if you choose to fly the drone indoors.

Video Editing – The app allows you to edit your videos and share them on social media.

One Key Return – Bring the drone back at the push of a button, the drone will also come back automatically when the battery is low on charge.

The drone fly’s exceptionally well and with its dual GPS feature it can lock on to multiple satellites and maintain a steady height and this makes it easier to control. It also fly’s well in slightly windy conditions, I wouldn’t recommend beginners to in any kind harsh weather as this drone is fast even on the lowest speed setting. Check out the video below to see how it performs.

The Visuo Zen K1 is a good HD camera drone that is easy to fly and comes with many cool features. The camera is high-quality, and you can take some exceptional aerial photography in 4K resolution. With features like the intelligent flight modes and headless mode, this drone is even suitable for absolute beginners. However, I must add that many people have started to complain that the drone app is unreliable and that the 5G WiFi does not properly connect to their phone. This is the one drone I have received the most issues about, it seems to be a hit and miss, for some it works alright while others have complained about a buggy app and WiFi connection problems. So, have a long think about it before you decide to purchase this drone, if you want a good alternative, I highly recommend you check out the Eachine EX4, which comes with many similar features but is slightly a bit more expensive.