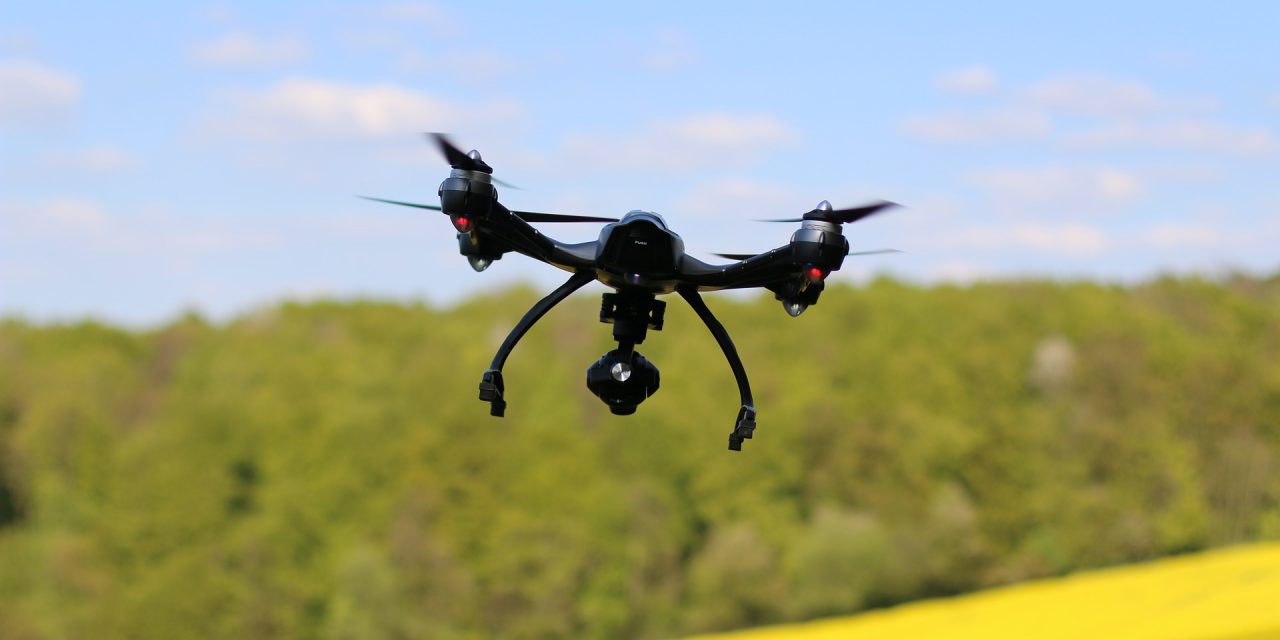 The Yuneec Q500 4K is a legitimate alternative to the DJI Phantom 3, it comes with some stunning features like a 4K camera capable of recording in UHD at 30FPS and taking crisp 12 MP still images. It also has several intelligent modes like watch me,follow me and automatic return home. The remote controller has an integrated 5.5 inch LCD display for live video streaming and has a transmission range of around 800m. If you are looking for an alternative to the DJI Phantom drones,the Yuneec Q500 4K will do just fine.

Welcome to my review of the Yuneec Typhoon Q500 4K drone, it’s a fantastic drone with some awesome features, features that put it on par with many of DJI’s Phantom drones however,can it challenge DJI’s dominance for aerial supremacy? That question will not be answered here,what we will find out is if the Yuneec Q500 4K drone is a viable alternative to DJI drones.

DJI remains the king of the consumer drone market mainly because, well because their drones are awesome. I mean look the at the phantom range and the Mavic pro, both are brilliant for multiple purposes, whether you want to take photographs, videos or even race other drones, DJI are the leading drone manufacturers for a reason.

Having said that, their main challenge in this industry is coming from another Chinese drone manufacturer, one that has been making aviation equipment since 1999.

Yuneec have been in the industry a long time but their drones have been overshadowed by DJI’s success. That is until now, Yuneec’s typhoon Q500 4k looks set to challenge DJI’s dominance. I wouldn’t say it is a phantom killer but it certainly will be a legitimate challenger.

So what makes this a potential game changer for Yuneec in the consumer drone market? Well for one it is aesthetically pleasing, I love the 3DR solo and especially its design, the Typhoon Q500 reminds me of this.

That isn’t the only thing it has in common with the 3D Robotics’ Solo drone, when I wrote my review of the 3DR, I stated it was truly the first smart drone. Well, the Typhoon Q500 4K can also be classed as a smart drone as it has some of the smart features that are available in the solo.

Plus it also comes with a UHD camera which is mounted on a 3-axis stabilising gimbal for distortion free aerial photography. The camera is capable of recording in 4K resolution which allows for stunning aerial footage

The drone comes in large silver trolley case like package inside of which it is made of Styrofoam (there is an option to purchase without a trolley case at a lower cost).

Alongside the drone, the pack contains the 4K camera gimbal, the SteadyGrip (more on this later), ST10+ controller, neck strap with sun shield, two batteries, two sets of propellers, a charger, a protective guard for the camera and cable to charge in the car.

It also comes with a 16GB micro SD card with tutorials videos, so that should come in handy for newbies.

A cool little gadget that comes with the drone is the SteadyGrip, a battery-powered device that lets you use the drone’s camera from the ground. Now I don’t know why they included this device with the package as it serves no purpose to the actual flying of the drone.

Having said that, it is a cool little gadget to have. To use it you must detach the camera from the drone and attach it to the SteadyGrip, then you just walk around with it recording whatever you want. There is an attachment at the top to where your smartphone goes so that you have a view of everything you record in real time.

The drone is a tad larger and heavier than the Phantom 3 but in my view, it is way more aesthetically pleasing to the eyes. One of the few criticisms of the Typhoon Q500 is that its body seems fragile and may not hold up well in rough weathers. These are correct observations but you shouldn’t really fly any drone in rough weathers apart from those built for industrial use.

Despite feeling fragile, it still flies well and will not break easily, although fly with caution and try not to crash it. I do love its colour scheme, the silver/grey body with its black head makes it look futuristic.

The drone comes with UHD 4k camera that is attached to a 3-axis gimbal which provides you distortion-free images and video footage. It has a 155° field of view and is capable of recording 1080p/120 fps slow motion videos and can take 12-megapixel still images.

This alone puts in the category for one of the best drones for aerial photography. The camera can be upgraded to a limited number of choices the GoPro Hero4 is probably the best, though it will set you back a few dollars (a few hundred maybe, check amazon for the latest prices).

The video streaming to the ST10+ controller is clean and crisp but does have a slight lag and although the screen resolution isn’t HD it still produces quality images. Check out the footage the Yuneec Q500 is capable of taking. 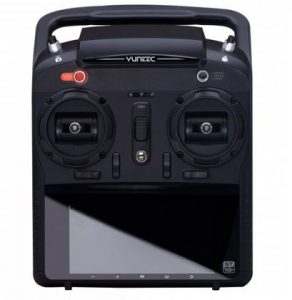 The ST10+ is an upgrade to the previous version of the controller that came with the Typhoon Q500, it has an integrated android tablet with a 5.5-inch LCD touchscreen display.

The downside is the screen resolution isn’t HD although the picture quality is still decent.

It has a switch to change flight modes of which there are 3.

At the back, there are two sliding controls, one is a proportional speed control it has small icons of a tortoise and hare whichever way you slide the control will determine how fast the drone goes. The other slider controls the camera gimbal, it will tilt the camera whichever way you want. It also has buttons to take images and video and a large red button to start the drone.

Its video streaming could be better, the technology isn’t as good as the Lightbridge system found in the DJI Phantom series. However, being able to control the camera through the gimbal and the stabilisation it provides is a definite plus.

The android app is intuitive enough that you will rarely need the manuals that come with it, nonetheless, it’s still good practice to go over the manuals to be on the safe side.

On the screen, there are various drone and camera settings you can adjust. It provides data for how many satellites there are for the drone if GPS is available, shows your latitude/longitude position, battery charge and various other data. It also has various camera controls like white balance, ISO level, video resolution and what image format the photos should be taken in.

The controller has a built-in fan to keep it cool and a built-in lithium-ion 5200mAh battery, which does take a long time to charge up when it’s completely drained.

The range of the transmitter under optimum conditions is 800m per official manual but test suggests you can manage around 600-700 before losing wi-fi connection. You will get decent video transmission for a range of up to 300m but after that, it gets choppy and then completely disconnects.

One other feature of the ST10+ controller is that should you use it for the typhoon H or the Yuneec tornado H920, you can pair up two controllers to the drone. This way one can control the drone while the other controller manages the camera gimbal.

Preparing the drone for a fight is straight forward, install the propellers, charge the batteries for both drone and controller and you are ready. The drone and controller take a few minutes to connect and it takes a bit more time for the drone to lock into 6 or more satellites. This is required for hovering and return to home feature.

There are three flight modes, angle, smart and return home. The easiest to use is the smart mode and this is the only mode of which the drone’s autonomous features can be utilised.

In smart mode, the watch me and follow me features can be enabled. These two features are probably the typhoon’s biggest attraction.

In follow me mode the drone will follow whoever has the controller by using a GPS signal from the ST10+. The watch me mode functions similar to the follow me mode except that it continuously focusses the camera on the person with the controller. This is an excellent feature for thrill seekers as they can record their adventures easily. 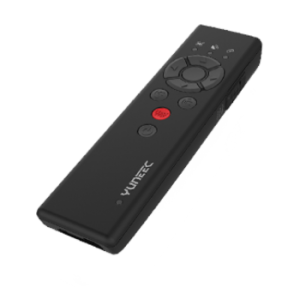 However, carrying around a huge controller whilst riding a bike or skiing isn’t very practical, therefore Yuneec designed and manufactured a one-handed controller called the wizard.

This little device is no bigger than a TV remote but with it, you can control the drone through various buttons and gestures. It can also be used in watch me and follow me mode which is much more practical than using a massive controller.

The return home mode is enabled either by switching flight modes automatically or when the battery is running low. This mode also has a smart safety feature which makes the drone land within 4-8 meters of the drone pilot.

The standard/angle mode is for more experienced done pilots, controlling the drone in this mode can be confusing for beginners. If you are new to piloting drones, have a read of my guide to flying a  drone.

Yuneec have certainly produced a high-end drone to challenge DJI’s phantom range. Its 4K camera and 3-axis gimbal will provide aerial photographers/videographers to take UHD distortion free video footage and images. Its smart features will make drone flying fun and easy even for beginners. The ST10+ controller with its integrated android tablet means you will not need to carry around your smartphone or tablet for first person view. And its wizard controller is a perfect little addition for thrill seekers. Its battery charge time could be better and its range of transmission for both flight and video streaming isn’t anywhere near DJI’s capability.

Having said that, it’s still an awesome drone and its designed that you can upgrade its camera should the need arise. If you are looking for a drone with smart features and a brilliant camera, then you cannot go wrong with the Yuneec Q500 4K.