What are the best drones under 250g? There are a lot of options to choose from, the drones listed below all come with amazing features and weigh less than 250g.

Drones are very popular right now and will probably remain popular well into the future. One of the most popular types of drones are ones that weigh less than 250g, mainly because they are easier to carry around and travel with.

The top 5 drones on this list are exceptional drones, they come with advanced features such as autonomous flight modes, 4k video recording, long transmission range and long flight times.

Laws For Drones Under 250g

Another reason for their rise in popularity is because, in certain countries like the USA and Canada, drones that weigh less than 250g do not need to be registered if they are solely used for recreational use.

So, in other words, if you have no intention of earning money from your drone and it weighs less than 250g, you do not need to register the drone if you live in the USA or Canada.

However, for those living in the USA, the FAA now requires you to pass the new TRUST exam for all recreational drone pilots. This will test your knowledge on the basic safety rules and regulations with regard to flying drones.

For those living in the UK, the rules have been recently changed and you are now required to register any drone that comes with a camera, even if it weighs less than 250g, check out the CAA website for more information.

Which Is The Best Drone Under 250 Grams?

There are always new drones being released, so the question of the best drone in a certain category will always change and be subjective, however, I believe the drone with the best technical specs that weighs under 250g is the new DJI Mini 3 Pro.

One area where this drone is completely superior to the DJI Mini 2 (my previous no.1 drone for under 250g) is its camera capability. The camera comes with some fantastic specs which include a large image sensor, large aperture, HDR image, and video recording capability, this drone is one of the best for aerial photography.

However, this is also the most expensive drone on this list costing between $800-$1000, so if you are not looking to spend more than $500, the best option is the DJI Mini 2. 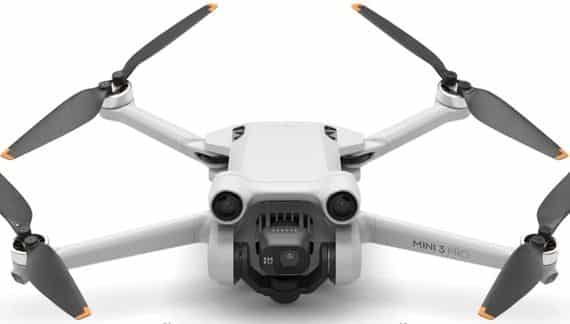 The DJI Mini 3 Pro drone is a powerful, ultra-compact drone, and my no.1 overall pick for the best drone under 250 grams. This drone is equipped with many advanced features that make it perfect for capturing stunning, cinematic footage. With its combination of portability, high-end camera, and advanced features, the Mini 3 Pro is one of the best consumer drones on the market today. The DJI Mini 3 Pro features a 1/1.3-inch CMOS sensor that can capture 48MP images and record 4K video footage at 60fps. The camera is stabilised by a unique 3-axis gimbal that allows you to capture true vertical images and more creative freedom for low-angle shots thanks to its impressive rotation range. The camera can also capture videos and photos in HDR and thanks to its large aperture, the camera can capture stunning night time photography. Other advanced features include 6 Quickshots, Mastershots, intelligent flight modes, and a 3-ways obstacle avoidance system. The drone has a level 5 wind rating and holds up well in slightly windy conditions despite its size and weight. It has a maximum flight time of 34 minutes and a transmission range of 12km. 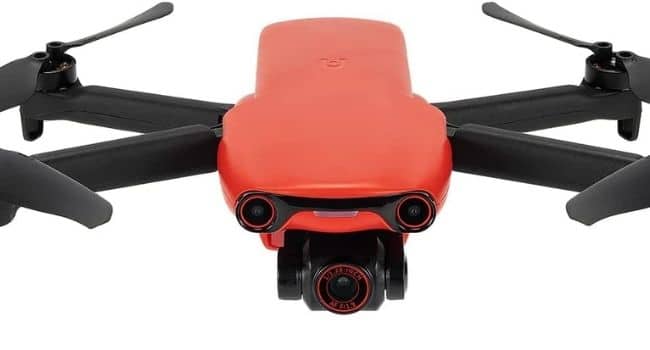 The new Autel Evo Nano Plus is a fantastic drone that comes with some amazing features. The standout feature of this drone is its camera which comes with a 1/1.28-inch CMOS sensor, one of the largest sensors on a drone of this size. The size of an image sensor is very important when it comes to video and photo quality, and the quality the Nano Plus camera produces is truly stunning. The camera can capture 50Mp still image in JPEG & RAW formats and has HDR imaging capability that will really bring out the colours in post-processing. The camera is stabilised by a 3-axis gimbal and can record 4k video footage at 30fps and create amazing time-lapse videos via its hyper-lapse feature. It is an incredible drone that also comes with an obstacle avoidance system, 28 minutes of flight time and 10km transmission range 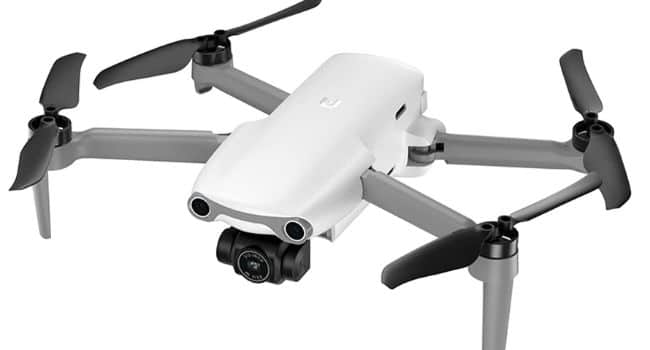 The Autel Evo Nano is similar to the Plus version, apart from its camera which comes with a smaller 1/2-inch CMOS sensor and captures 48MP images. This drone comes with the same features as the Nano Plus, it can record 4k HDR videos at 30fps and comes with many advanced features such as autonomous flight modes, Quickshots, an obstacle avoidance system and long range transmission technology 28 minutes of flight time. 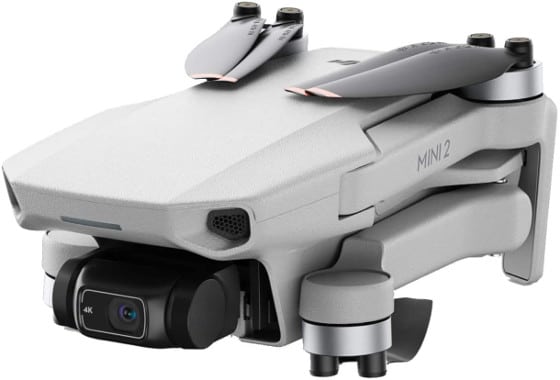 The successor to the hugely popular Mavic Mini, the Mini 2 comes with a 1/2.3-inch CMOS sensor that can record video footage in 4k at 30fps and has a recording speed of 100Mbps. The camera can capture images in 12MP in both RAW & JPEG formats and has auto-exposure bracketing that stitches together 3 images to create an HDR image. It has a feature called Quickshots that allows anyone to capture short cinematic videos at the click of a button and comes with DJI’s advanced OcuSync 2.0 transmission system for a better live video feed. 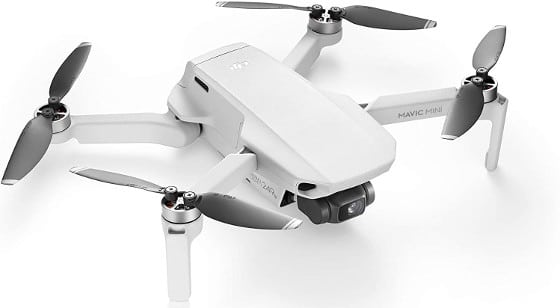 The Mavic Mini is one of the best drones under 250g and wowed audiences when it was first released. This small compact drone comes with an HD camera capable of recording video footage in 2.7k and capturing still image in 12MP. The camera is stabilised by a 3-axis gimbal that will reduce distortion in your videos and photos, and it comes with an enhanced WiFi system for a control range of 4km. 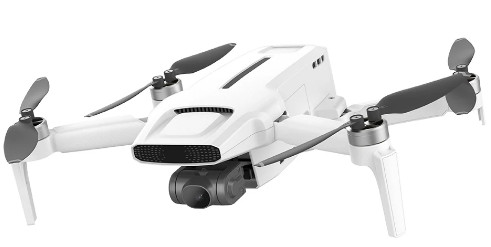 The X8 Mini is Fimi’s answer to DJI’s Mini series of drones, specifically the Mini 2. This drone comes with some amazing features which includes intelligent flight modes like image tracking and orbit mode, a feature that isn’t available with the DJI Mini 2. It has an excellent camera that has an 80° field of view and fixed f/2.0 aperture. The camera records 4k video footage with high dynamic range and comes with an image chipset from Hisilicon that allows the camera to capture even more colour detail. The drone comes with a triple GNSS module for more precise tracking and has a flight time of 30 minutes. 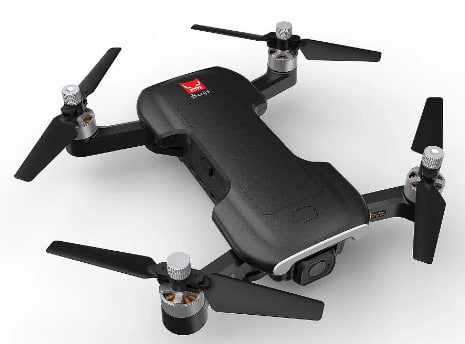 A fantastic mini drone from MJX, the Bugs 7 is a well-designed foldable drone that is suitable for beginners and comes with many fun features which includes an HD camera, GPS automatic return to home and intelligent flight modes. It has cool LED lights on the front and back and comes with an optical flow sensor that will allow you to fly the drone indoors. It has a flight time of around 12 minutes, so purchase an extra battery to extend the flight time and has a control range of around 200 meters. 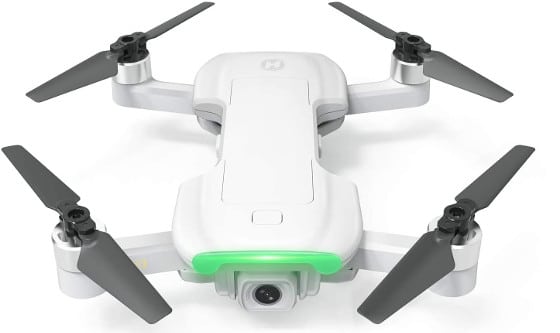 This is a rebranded version of the MJX Bugs 7, it comes with all the same features, however, it uses a different app called the Ophelia GO, which I believe is inferior to the MJX M RC PRO app. If the Ophelia GO doesn’t work properly, you can use the M RC PRO app for this drone.

This is a fun little cheap GPS drone, it’s ultra-lightweight and has a foldable design that makes it easier to carry around. The drone comes with a dual GNSS module that can connect with satellites from GPS and GLONASS and it comes with a couple of intelligent flight modes and an automatic return to home feature. The camera can record videos in 2k and captures 4MP still images and the live video feed can be transmitted from 300 meters. A fun drone that is suitable for beginners and comes with a decent flight time. 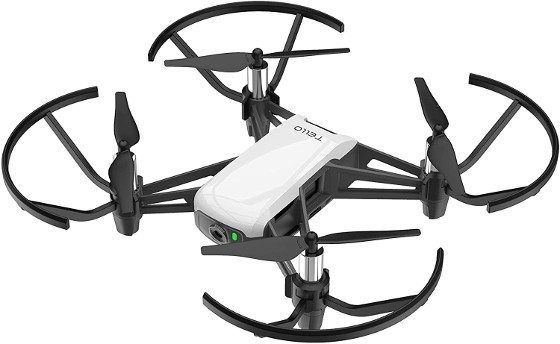 If you are a complete beginner and looking for a cheap fun drone that weighs less than 250g and is suitable for both kids and adults, the DJI Tello drone is the drone for you. This mini drone comes with some impressive features, especially for a drone that costs less than $100. It has 720p HD camera that transmits a very good live video feed and captures 5MP still images. The camera comes with an Intel processor that stabilises your videos and photos and has a feature called EZ Shots that allows you to record short videos hands-free.