The Mavic 2 Pro is one of the best prosumer drones on the market, the drone has a wide range of professional uses in areas such as photogrammetry, photography, and videography. The drone comes with a Hasselblad engineered camera that has a 20MP 1-inch sensor, adjustable aperture and comes Hasselblads Natural Colour solution technology for detailed colour accuracy in every image. The camera can record video footage in 4k at 30fps at 100Mbps and can record in 10-bit Dlog and HLG for HDR videos. Other features include obstacle avoidance technology, multiple autonomous flight modes, OcuSync 2.0 for long range image transmission and 30 minutes of flight time.

When DJI first released the original Mavic drone, it was ground-breaking in many ways. Its compact design along with its many advanced features made it one of the best consumer drones on the market. Although it took them a couple of years, DJI finally released the successor to the Mavic drone in 2018 with two iterations of the Mavic 2, the Mavic 2 Zoom and the Mavic 2 Pro. The Mavic 2 Pro version is the drone under review in this article, although the only difference between the Zoom and Pro is the camera.

The DJI Mavic 2 Pro has been on the market for a few years now, it remains one of the best drones for photography despite DJI having stopped production of the drone.

However, DJI have since released a couple of drones that compare favourably against the Mavic 2 Pro. The Mavic Air 2S, which comes with a 1-inch image sensor, is much lighter and cheaper than the Mavic 2 Pro.

The other is the recently released, Mavic 3, which has superior features in every department, this includes being the first foldable prosumer drone that comes equipped with a dual-camera system. However, the DJI Mavic 3 is much more expensive and may not be the most suitable option if you are on a tight budget.

The DJI Mavic 2 Pro is a feature-rich drone that is suitable for commercial applications, especially in there are of photography and videography.

If you are thinking of purchasing this drone for commercial purposes or to make money some other way, you will need to register this drone with FAA or the CAA.

In the USA, the FAA requires you to obtain the Part 107 certificate to fly drones for commercial purposes, while in the UK, the CAA will require you to obtain a Flyer ID & Operator ID.

However, if you believe that your drone operations will be close to people, you may also be required to obtain a General Visual Line of Sight certificate (GVC). For more information check out the CAA website.

Like its predecessor, the Mavic 2 Pro maintains the compact and foldable design that have made the Mavic drones so popular.

The drone is a little heavier but still weighs less than 1kg, in its folded form it measures 214×91×84 mm. With its overall size nearly halved when it is folded up, the Mavic 2 Pro is great to travel with as it can be easily packed away without taking up much space.

The Mavic 2 Pro has a robust build, its outer shell is made from some form of high-quality ABS polymer, while its internal frame is magnesium alloy.

It can be operated in extremely cold temperatures of up to -10°C and has a wind resistance of 23 mph, although, like most, prosumer drones, it is not waterproof.

The drone is powered by a smart LiPO battery that provides the drone with around 30 minutes of flight time and has LED lights to indicate the power level. The battery comes with several intelligent features that keep it in optimal conditions by preventing overcharging, automatically discharging when it is not in use and protecting it from short-circuiting.

While 30 minutes of flight time is good for a prosumer drone, you may think about purchasing another battery to extend flight time without having to wait for one battery to recharge.

One of the major upgrades to the original Mavic drone is the omnidirectional obstacle avoidance system.

It has sensors on the front, back, both sides, top and bottom, the sensors consist of cameras and infrared sensors.

At the time of its release, it was an innovative system and the best drone with an obstacle avoidance system. However, that title has since been taken by the brilliant Skydio 2 and now also the Mavic 3.

The sensors on the bottom also allow the drone to maintain a steady altitude which is useful in areas with a weak GPS signal, this feature also allows the drone to be flown indoors.

There is an LED light on the bottom that can help the drone navigate in low light environments and allow pilots to lad the drone more safely.

Unlike the original Mavic, the Mavic 2 Pro comes with an internal 8GB of storage and there is a memory card slot that can take a maximum capacity of 128GB. You should definitely think about purchasing a memory card, especially capturing 4k video footage that will use up memory space quickly.

The remote controller for the Mavic 2 Pro has also seen an upgrade, it still maintains a similar look, however, there are some differences. The controller has an LCD screen that will display telemetry data about the drone.

It comes with DJI’s OcuSync 2.0 enhanced transmission technology that allows for a transmission range of 8km. The technology also reduces latency for video streaming, allowing you to stream live HD video footage to your smartphone with little interference.

There is a pair of clamps that fold out from the bottom between which you will be able to attach a large smartphone.

You can operate the drone with just the controller, however, to make full use of all its features, you will need to download the DJI GO 4 App.

The GO 4 App gives you access to most of the drone’s features such as autonomous flight modes, quickshots, advanced camera settings, flight settings, has a simple video editor and even has some tutorials and a flight simulator for complete beginners.

It’s an easy to use app with a nice UI, it displays flight data, a small map and gives a warning in no-fly zones, the app is available for both Android and iOS devices. 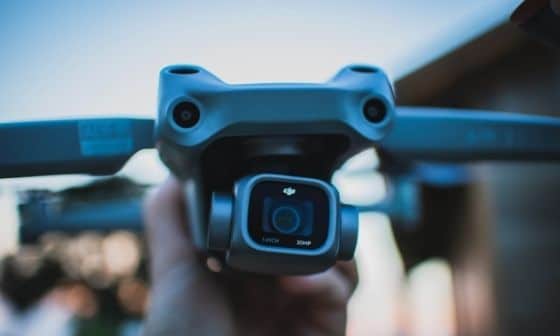 Of course, the main feature of this drone is its camera, the Mavic 2 Pro comes equipped with one of the best cameras on any prosumer drone and one of a few foldable drones that has a 1-inch image sensor inside its camera.

Its adjustable aperture gives you more control over exposure levels and allows you to shoot in aperture or shutter priority as well as manual mode.

The camera incorporates Hasselblad’s natural colour solution technology that will allow photographers to capture images with amazing colour accuracy in both RAW and JPEG file formats.

There are 5 photography shooting modes that include single shot, burst shooting, AEB, panorama and interval.

As for recording videos, the camera can capture 4k video footage at 30fps and has a maximum recording rate of 100Mbps. It can also record 2.7k videos at 30fps and slow-motion videos in FHD at 120fps.

Overall, this is a great camera and will allow amateurs and professionals to capture some truly stunning aerial images and videos.

At the time of its release, this was probably the best drone for photography, however, there are a lot of good alternatives and some of them are cheaper like the DJI Mavic Air 2 and Air 2S. 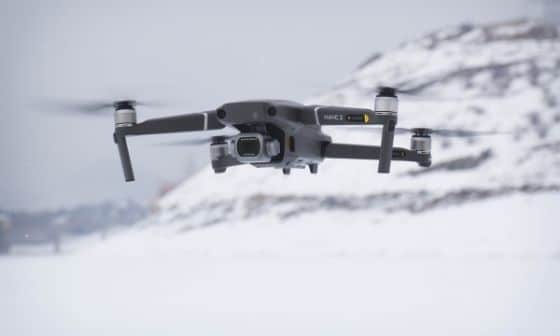 Like most consumer drones from DJI, the Mavic Pro comes with 3 flight modes, they are positional, sports and tripod mode.

The default mode is the positional mode, this works best in areas with a strong GPS signal, obstacle avoidance and autonomous flight modes are enabled, and it has a maximum speed of 31 mph.

The tripod mode (or cinematic mode) is similar to positional mode, one difference being the maximum speed being reduced to just 2.2 mph.

In the sports mode, the controls are more sensitive, and the vision systems are disabled, and the autonomous flight modes are not available. The drone can reach a speed of 44 mph in sports mode.

The drone comes with several intelligent flight modes, these include active track, point of interest, waypoint and tap fly.

There is a hyperlapse mode that will allow users to create 4k time-lapse videos, videos can be created from different autonomous flight modes that can only be accessed via the hyoerlapse tab on the DJI GO 4 app.

There is a cool feature called QuickShots, it allows users to easily record short high-quality video footage from 6 different angles complete autonomously. These short videos are fun to take with family and friends and can be easily edited and shared on social media via the GO 4 App.

Another intelligent feature is the automatic return to home feature, this feature is now on most advanced drones.

It’s a safety feature that minimises the risks of losing your drone in mid-flight by automatically returning to its home point whenever the drone battery gets low on charge or you lose connection for more than 2 seconds.

This feature can also be activated manually via the remote controller or the GO 4 App.

So, what’s it like to fly the Mavic 2 Pro? Well, like most advanced drones with sophisticated flight technology, it is very easy to operate. Even beginners will find this drone effortless to fly with its dual GPS module, advanced flight controller and one-button take-off/landing and automatic return to home feature.

The obstacle avoidance system is one of the best in the DJI range, although it’s not as effective as the system on the Skydio 2 and usually struggles in places like forests and areas with lots of obstacles in close proximity.

Where the drone really shines is its camera, even after being on the market for a few years now, it still remains one of the best camera drones on the market.

If you are a photographer, this drone will certainly please you with its features, especially since the camera has been engineered by Hasselblad and comes with their innovative natural colour technology.

With DJI’s OcuSync 2.0 long range image transmission technology, videos are streamed in HD at 30fps and as long as the day is clear and there is little interference, the FPV feed is very good.

The drone also holds up well in windy conditions and can easily manage around 27 minutes of flight time in decent weather conditions.

The Mavic 2 Pro is a fantastic camera drone that is suitable for professional photographers. Its compact and foldable design makes it easy to carry around a great choice for a travel-friendly drone.

However, it has been a few years since its release and there are a few alternatives that you may want to consider. The DJI Air 2S compares well against the Mavic 2 Pro, it comes with similar features but is much cheaper. Other drones include the Air 2S and the more expensive Mavic 3.