In this article, we shall compare two very popular consumer drones, the DJI Mini SE vs Holy Stone HS720E.

The DJI Mini SE is the new version of the Mavic Mini and it looks like it will be replacing it as the Mavic Mini is no longer listed on DJI’s website.

The Mini SE is DJI’s cheapest drone and probably the best in its price range, the drone costs under $300 and is suitable for people looking for a cheap drone for photography.

The Holy Stone HS720E is a little more expensive and comes with some impressive features which includes a 4k camera.

Both these drones are suitable for beginners and very fun to fly, but which one should you choose? Read on and find out my personal preference.

Before I go any further, I want to remind my readers of the importance of flying safely and following local drone laws. If you live in the UK, USA or Canada, please check out the following sites for details on the rules and regulations related to flying drones.

Wherever you live, there will be rules and regulations related to flying drones, please make sure you abide by them. 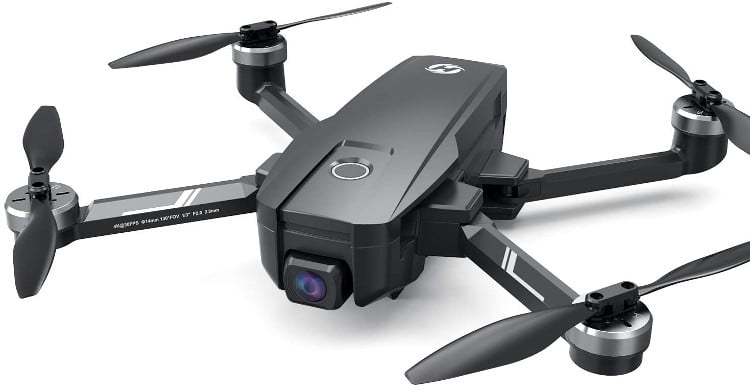 The camera is the first feature I like to assess whenever I am comparing drones, it’s probably the best feature of a drone and one of the reasons for their rise in popularity.

The DJI Mini SE comes with a good HD camera that is stabilised by a 3-axis gimbal, the addition of a gimbal on such a small drone is no small feat.

Video footage is recorded in 2.7K at 30fps or 1080p at 60fps and records videos at 40 Mbps. The quality is good, especially for a drone under $300 and thanks to its gimbal, video footage is images are smooth and crisp.

The camera streams live video in 720p at 30fps and has an image transmission range of 4km thanks to its enhanced Wi-fi system.

The Holy Stone HS720E is equipped with an HD camera that can record in 4k at 30fps and capture images in 8MP. The camera has a 130° FOV and comes with an electronic image stabilisation (EIS) feature that will reduce distortion in images and videos.

Unlike the DJI Mini SE, the Holy Stone HS720E does not come with a gimbal system but you can still adjust the cameras angle up or down 90° for better viewing angles. Live video footage is streamed in HD and to record in the highest resolution, you will need a high-quality micro SD card.

Overall, I personally prefer the DJI Mini SE camera, despite the lower resolution for recording videos, the output is better as is the photo quality and live video feed.

The DJI Mini SE is a nice looking drone, its small, lightweight and has a foldable design, all of which makes it easy to carry around and a good choice for a drone to travel with.

The drone weighs less than 250g, this is one of its attractive features as you will not need to register the drone if you live in the USA and only plan on using it for recreational purposes.

The drone comes with brushless motors, has dual GNSS receivers, an optical flow sensor and has a micro SD card slot that takes fast memory cards with a maximum capacity of 256GB.

The drone is powered by a 2S lithium polymer battery that provides a flight time of around 27-30 minutes and comes with smart features that allows it to perform at optimal levels at all times.

The Holy Stone HS720E is a fantastic looking drone, I personally prefer the overall design elements of this drone over the DJI Mini SE.

It too is a foldable drone, although much bigger and heavier than the DJI Mini SE, it has a nice all-black colour scheme that makes it look stealthy.

The drone weighs just under 500g, so you will need to register the drone if you live in the USA or UK.

The drone comes with brushless motors and has nice looking LED lights on the end of each rotor. It’s powered by a 7.4v 2800 mAh lithium polymer battery which provides it with a flight time of 23 minutes.

The Holy Stone HS720E also comes with an extra battery which is an added bonus and will allow you to extend the flight time without having to wait for the battery to recharge.

The controller for both drones have a minimalist look, they are small and comfortable to hold.

The DJI Mini SE controller has a pair of handles that pull out from the bottom between which you can attach a decent sized smartphone.

Its also powered by an internal battery which lasts several hours and has a range of 4km.

The controller for the Holy Stone HS720E is similar in design, however, it requires 2 AA batteries, which are not included with the drone package.

One cool feature of this controller is its LCD screen which displays flight data about the drone which allows you to see the height/distance of the drone as well as its GPS strength and battery life.

The DJI Mini SE has an official flight time of 30 minutes, most people get around 28 minutes from one battery charge, you may get more, if you fly in windless conditions and don’t fly too fast.

Video is streamed in 720p at 30fps and using enhanced Wi-Fi, video footage can be streamed from 4km. However, in most countries, you will be required to keep all drones with your line of sight, so flying it that far out is not recommended.

There is an intelligent video recording mode called Quickshots, it allows you to capture short cinematic videos from different angles at the push of a button.

The drone has a top speed of 29 mph which can be achieved in its sports mode and despite being a small and lightweight drone, it holds up well in light windy conditions.

The Holy Stone HS720E has a flight time of 23 minutes, although, most people get around 20 minutes, which is still decent.

Unlike the DJI Mini SE, the Holy Stone HS720E comes with intelligent flight modes, these include follow me, orbit mode, tap fly and waypoint.

These are GPS enabled flight modes, so they only work in areas with a strong GPS signal. The drone’s FPV feature is pretty good, you can stream live video footage from a distance of around 500 meters.

The drone flight performance is good, and it holds up well in windy conditions thanks to its size and powerful brushless motors.

Both the DJI and Holy Stone drones come with GPS enabled automatic return to home feature, this feature can be activated via the remote controller or app, and it activates automatically whenever the connection is lost, or the drone battery gets low on charge. 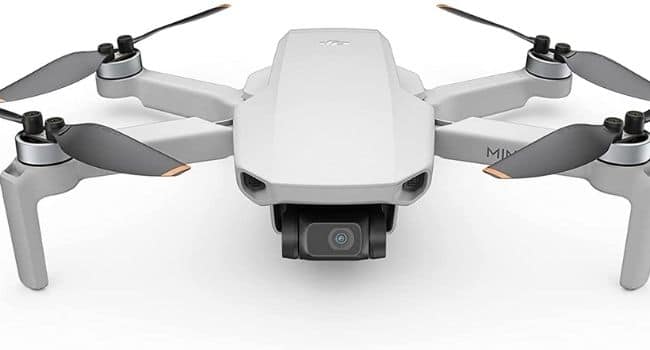 Both these drones are very good and two of the best in their price range, although the Holy Stone HS720E comes with intelligent flight modes and, in my opinion, the better-looking drones, I still prefer the DJI Mini SE. It’s the best drone under $300, comes with a very good HD camera, has 30 minutes of flight time and weighs under 250g.

However, the DJI Mini SE is only available in the USA at the moment, so if you live anywhere else, you may want to check out other drones around the same price range.