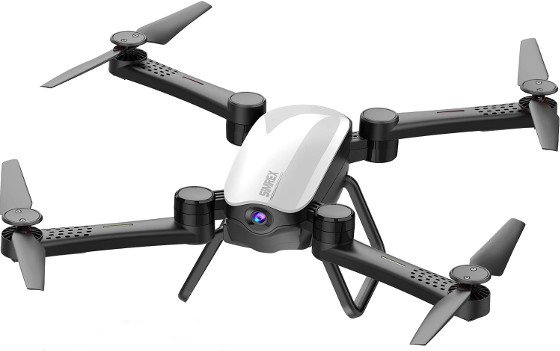 The Simrex X900 is a beginner-friendly drone that comes with an HD camera and some decent features. It’s a small foldable drone that costs less than $100, it’s very lightweight and easy to fly and comes with features like one-button take-off and return, FPV, 3D flips and 3-speed modes. It also has a flight time of around 12 minutes, it’s not my favourite beginner-friendly but for its price, it’s worth it.

Hi and welcome to my review of the Simrex X900 drone.

Are you looking for a cheap, beginner-friendly drone with a camera and some decent features? Well, in the age of drones you are really spoilt for choice, there are a lot of good cheap drones on the market and of those is the Simrex X900.

This is a very popular beginner-friendly drone on Amazon, it has a 4 star-rating, lots of positive reviews and costs less than $100. If you want a cool, cheap drone to have some fun, the Simrex X900 drone is a good choice and this review will show you why.

I haven’t reviewed a Simrex drone before, from what I understand, most of their drones are low-cost, usually under $100 and they are suitable for everyone.

The Simrex X900 is a small drone that has a foldable design, it’s a nice-looking drone that isn’t too big when fully expanded. It’s also a lightweight drone, but it weighs more than 250g which means if you live in the UK, Canada or the USA, you will need to register the drone. 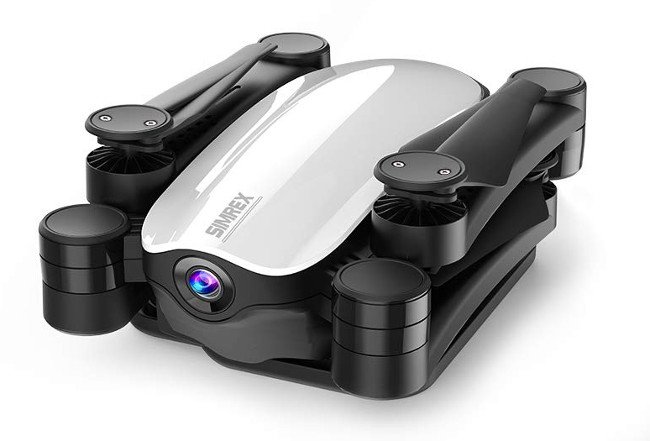 Most other countries do not require you to register a drone if all you are going to be doing is flying for fun regardless of how much the drone weighs. Still, I advise people to check what the rules and regulations are in relation to recreational drone flight, so you fully comply with the law.

The weight and foldable design also make this a good drone to take with you on your travels (if you do travel a lot). Although, I would personally prefer something a little more advanced than the Simrex X900 to travel with, especially a drone with a better camera.

Still, it’s a very cheap drone and comes with some cool features that will be fun to use in your travels.

As you would expect from such a cheap drone, its made out from plastic, although it doesn’t feel very fragile like it will not breakup if you crash it now and again. There are some propeller guards that come with the drone which I highly recommend that you use as it will minimise any damage to the drone should you crash it.

The drone is fitted with brushed motors, this also something to be expected with a cheap drone. Brushed motors are not very powerful or efficient and they are louder than brushless motors but for a cheap drone, they are sufficient.

One thing I do recommend is to regularly clean the motors to keep them in optimal conditions, you should do this with brushless motors as well, but brushed motors require a little more maintenance to keep them operating properly.

There are LED lights underneath each rotor arm, these look nice if you fly the drone in twilight hours, they also help to indicate when the drone compass has been fully calibrated, something you will be required to do before every flight.

The HD camera is fixed on the nose of the drone and it’s a pretty decent one considering how much the drone costs. There are a pair of landing legs that are attached to the drone, these are foldable landing legs, so you can fold them in just like the rotor arms.

There is a slot for a micro SD card on the bottom of the drone, it takes a class 10 card and up to a limit of 32GB. If you want to record your images and videos, you will need to purchase a compatible memory card as one is not included with the drone package.

The drone comes with an optical flow sensor that will allow it to fly more smoothly and hover accurately when you let go of the controls. This feature will allow you to take better quality images and videos and also allow you to fly the drone indoors. 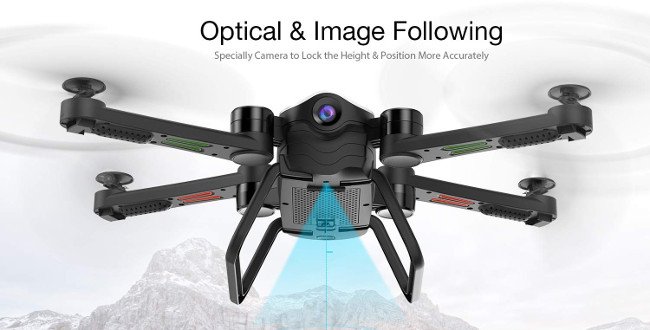 The Simrex X900 drone is powered by a 3.7 1200 Ah battery, its fits in the belly of the drone and provides a flight time of around 12 minutes which is pretty good for a drone that costs less than $100. Still, I would advise people to purchase a couple of extra batteries to extend the flight time because let’s face it, 12 minutes will not be enough time to fully enjoy flying a drone.

The drone controller looks nice, it has a minimalist design and has a sort of rubbery feel to it. It’s powered by an internal lipo battery, which is always nice as it saves you money from having to purchase some batteries yourself. There is a smartphone holder that pulls out from the top, it can hold a pretty large smartphone but not a tablet.

You can also control the drone via the HFUN app, this is a decent app and you will need it for FPV purposes. However, it does have its issues like sometimes it crashes, or the live video feed is interrupted, this isn’t unique to this app, a lot of drone apps have similar problems.

When it does work, it’s a pretty easy app to work out despite a lot of the instruction being in Chinese. The drone does come with a helpful menu, so if you cannot figure out how to operate the drone with the app, you can always refer to the manual.

This is a very cheap drone but it does come with a camera with which you can have a lot of fun.

It’s a 1080p camera that has a 110° FOV, although the actual quality of the video isn’t really HD, it is good enough for a drone under $100. The FPV feed is in standard 480p and if the app is working correctly and you stay well-within the transmission range, the live footage is decent enough.

Although it’s an overall decent camera, the issues with app are a problem and there are better options out there. My no.1 choice for the best drone under $100 is the DJI Tello drone, it comes with a good camera and some very good features and a far superior app.

Like I mentioned earlier in the article, the drone does come with some cool features that will make it more fun to fly, these features include the following;

Headless Mode – This is the default flight mode, its best for beginners as the drone is easier to fly.

Altitude Hold – With its optical flow sensor, it flies smoothly and can hover pretty decently.

3D Flips – With the push of a button the drone will do some cool 360° flips which will impress family and friends.

Gravity Sensor Mode – In this mode, you can fly the drone by moving your smartphone around.

3 Speed Modes – You can test your flying skills by switching between different speeds even in mid-flight.

The drone also comes with one-button take-off and landing and is also compatible with VR headsets that will give you a more immersive flying experience.

This is an easy drone to fly, the controls are easy to operate and as long as you fly in non-windy conditions, you will have no problems controlling the drone. If you do decide to fly in windy conditions, make sure to install the propeller guards to minimise any damage to the drone if you do crash it.

There are a lot of cheap drones that come with some decent features and are fun to fly, the Simrex X900 is one of them. It’s suitable for everyone but it’s mainly targeted for beginners, it comes with a decent camera and some nice features, however, the app does have some problems and sometimes the live video feed may be cut-off. For more information and its current price click on the button below.